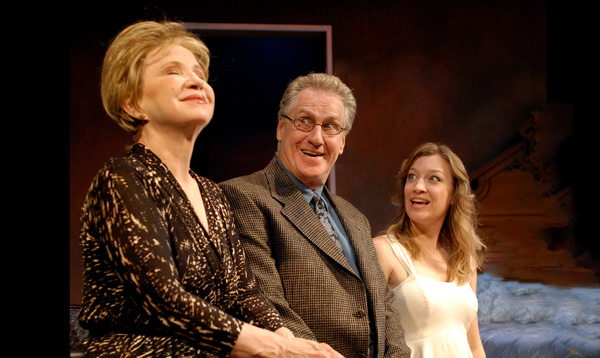 Gail M. Burns: J.T. Rogers’ 2004 mystery/memory play Madagascar is exactly the kind of show Chester does best – a small cast, one-set, intellectual thriller. We saw echoes of Shakespeare, Chekhov, and Pinter in its intricate though oblique structure. The three characters occupy the same hotel room, but at different points in time, so they never interact directly. In fact, by the end, it is apparent that, in the action set in the present time, it would be impossible for them to do so.

Larry Murray: I loved everything about this play except the script which is also why so many will enjoy it. It talks about rich white people suffering self-doubt, and that bores me to tears. The pretentiousness of the writing with its metaphors, allusions and flights into poetic arias can not disguise the fact that it moves very slowly and circuitously on stage. It asks its audience to spend two hours in the middle of a hotel room overlooking the Spanish Steps in Rome with three self-absorbed characters trying to figure out why a fourth character disappeared from their lives. As academic theatre by a playwrright with a degree and many awards, this play may hit the spot with theatre-goers who are of a certain age and impressed by transcripts and C.V.’s. But if you are like me, you like your theatre to be an exploration about something more than white folk all neatly tied up in clever metaphors, similes, and allusions which this play has in spades, right Gail?

Gail: Well I am that academic cerebral theatre-goer of a certain age, so I enjoyed this play a whole lot more than you did, although I agree that it was heavy with allusions to Greek and Roman mythology and culture, all of which used to be part of what white Western culture called a “Classic Education.” The matinee audience we attended with was of the generation who received such an education. Younger folks, or non-white folks, might find this totally confusing and irrelevant to their experience and more diverse educational background.

Larry: That Madagascar is well-bred with perfect manners is true, and those whose world is orderly are certainly going to like it for that. But my other reservation is it seems that all the action in this play – it’s big bang – happens offstage or in the past. All we experience, as an audience, is its aferglow as deduced from each characters memory.

Gail: Madagascar is set in a single hotel room in Rome at three different time periods. Lillian Doyle (Debra Jo Rupp), the widow of the late economics professor Arthur Doyle, speaks to us from a time five years ago on the day she is waiting to be joined in Rome by her estranged son Gideon Paul Doyle, who she calls Gideon although the others call him Paul. Speaking from a time just a few weeks ago is June Doyle (Kim Stauffer), Lillian and Arthur’s daughter and Gideon/Paul’s sister, possibly his fraternal twin. And speaking to us in the present is Arthur’s colleague, an economics professor named Nathan (Paul O’Brien), who has been close to all the Doyle family, especially to Lillian.

Larry: Other reviewers have described Madagascar as delicate, poetic and subtle. Indeed, that is how you might describe it, and it is indeed very good as literature. But not so wonderful as theatre. The action consists of three rich people moving around in the same hotel room in Rome at different times trying to figure out what went wrong. Why the most important character of all, the son – whose full name is Gideon Paul Doyle and who is called both Gideon and Paul by different characters – who is talked about endlessly, disappeared? And how come the playwright took what might be the only character in the story who was interesting and have other people describe him instead of letting us see for ourselves?. He at least had the good sense to flee the clutches of the three characters in search of a different reality that the one taking place on stage.

Gail: I am not at all sure Gideon/Paul wouldn’t have been just as insufferable if we saw and heard him on stage. He sounded like an annoying, over-educated, and over-privileged white boy to me. He certainly has a wide cruel streak.

Larry: Debra Jo Rupp, who I so admired in Becoming Dr. Ruth, delivered another deeply layered performance, but in this new role had to lose both the plain-talking common sense and sense of humor for this portrayal. J.T. Rogers gives her the role of a mother incapable of asking a direct question, or flushing out the truth of the relationship Gideon/Paul has with his sister, June, who is meticulously played by the superb Kim Stauffer. As Nathan, Paul O’Brien’s character gets to bed them both, yet in those relationships there seems to be no joy, and certainly no honesty. The three slowly glide about the hotel room, each detailing their memories – and nightmares – in different time frames. An unseen husband/father, Arthur, is also part of the mix, but like the son is never seen.

In the play it is also noted that Gideon/Paul sends notes, letters, articles with lots of little comments written in the margins, but we never get to see the marginalia, which is like trying to solve a puzzle with pieces missing. And we never really know just why Nathan is such a hot stud that both mother and daughter seem to fancy him.

Gail: I am not sure Nathan actually beds June, but they share a moment when they both become aware that that is what they want. Frankly, I can’t see what’s so appealing about the guy, either.

“…so often what I want to do is throw up my hands and go AHHHH! Because part of me desperately wants to write nothing but stories about New York Times-reading, NPR-listening liberals who can hum at least two numbers from South Pacific. To only write about people like most of you. Like me. After all, I’m pretty familiar with me. I don’t have to do a lot of research on me. I feel safe when it’s just about me.” – J.T. Rogers

Larry: In the world of contemporary play-writing it’s bad enough we have so many plays about dysfunctional families, and that could be a reflection of today’s reality. I don’t know. All my life I have done my best not to get mixed up with the pompous and self-absorbed and sought out those with interesting ideas and a sense of adventure instead. Gideon/Paul seemed to be the family’s only hope for doing something interesting with his life. In the end I wish that Chester had picked one of J.T. Rogers later plays where he began to develop a wider, more worldly view, since we only get the slightest hint of it here. The play may be set in Rome, and have people traveling to Africa, but the characters are still who they are, taking their small worlds with them as they travel.

Gail: Actually the playwright, J.T. Rogers, is known for his plays that address broader cultural and racial issues, as he articulated here in his 2008 Laura Pels Keynote Address “Writing Without Borders” to the annual meeting of the Alliance of Resident Theatres/New York (A.R.T./New York.)

While making an impassioned case “to collectively broaden the scope of the plays we write and the plays we put on…in practical terms we have to start dramatizing the stories of people from countries and cultures different from our own” he also admits “…of course we’re going to keep doing plays about over-educated, middle-class liberals who live in New York City.”

In 2004, the year Madagascar was published he also published The Overwhelming, a play about an American family who arrive in Kigali, Rwanda, in early 1994, and “must confront life-and-death realities of the Rwandan Genocide.” Both plays won multiple, although very different, awards and have been produced internationally in the the intervening decade.

Larry: Paul O’Brien plays the scruffy academic character, Nathan and Rupp the impeccably dressed upper-class matron that so many strive for, all style and no substance. In one scene at a party, she manages to seduce Nathan with few words, but we never get to understand what drove the two into bed, other than perhaps the playwright’s need to have some sort of puzzles in his plot.

Gail: Or some sex, which seems to be the one basic human need in which Rupp’s character ever indulges. For all we know June and Gideon/Paul remain virgins. The Vestal Virgins, the real ancient Roman ones, feature heavily in the play. I am not sure I wanted or needed to know what the punishment was for the virgin who allowed herself to be, or was forcibly, deflowered, but that odd ritual is also described in detail. No mention is made of whether the man involved was also punished.

Larry: There was the big bed in the middle of the set and nobody did more than sit on it for a few seconds. Where was the sex, the love, the excitement?

For me, watching the play was like watching wilting flowers in a cut glass vase. Beautifully directed and arranged by James Warwick, with an atmospheric set by Travis A. George and perfect costumes by Arthur Oliver, who knows a vestal virgin when he sees one, I can’t fault Chester in any aspect of their production. But the choice of this ponderous work by J.T. Rogers just smells of scholarly payback, one colleague helping another, and while the play is competently written, when the curtain calls came it left me feeling bloated and full of gas. So I don’t understand why you liked it so much, Gail.

Gail: I enjoyed the puzzle, the mystery of this play. I had fun putting all the pieces together. And I loved this production. It looked beautiful and the performances, especially those by Rupp and Stauffer, were perfect. Madagascar may not end up being my favorite play of the season, but it certainly is a fine production and good entertainment for those of us who love an intellectual challenge.