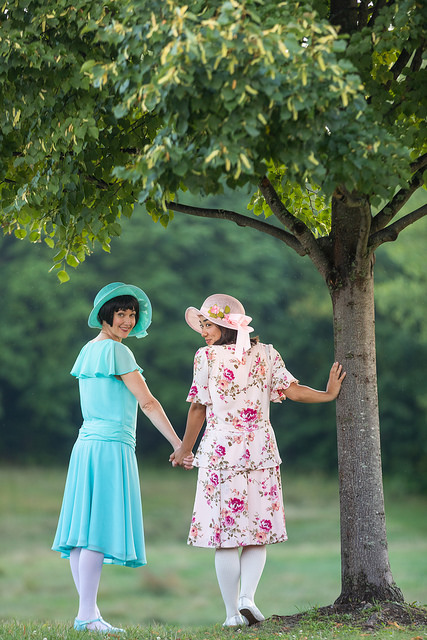 A wooded glade lined with white pine trees in the Berkshires is a perfect stand-in for the Forest of Arden, the setting for As You Like It, the tale of palace intrigue, battling brothers, pastoral comedy and young love now at Shakespeare & Company in Lenox.

Duke Frederick has banished his brother, Duke Senior, from court, but allowed Duke Senior’s daughter Rosalind to stay as companion to his own daughter, Celia.  Young Orlando has been forced into poverty by his brother Oliver, who is withholding the fortune Orlando inherited from their father. As the play gets underway, Duke Frederick has a change of heart and sends Rosalind away, accusing her of being a traitor like her father. She and Celia decide to disguise themselves and go to the Forest of Arden, but not before she has fallen in love with Orlando after watching him in a wrestling match.  Later, in the forest, disguised as Ganymede, a young page, she tests Orlando’s love for his fair Rosalind.

The director, Allyn Burrows, has set the play in the Roaring ‘20s, and the young women wear drop-waist dresses and cloche hats designed by Govane Lohbauer. The cast is filled with S&Co regulars and a few first-timers, all of whom handle the language and the slapstick comedy with equal ease.

As Rosalind, Aimee Doherty sparkles brightly, her singing voice as strong as her acting.  Her loyal bestie, Celia, is played with understated wit by Zoë Laiz, who is also weird and hilarious as Adam, Orlando’s pal, who is variously dragged around in a wheelbarrow or carried like a scarecrow.  Ella Loudon shines in the dual roles of LaBelle, who she plays like a gangly French-accented schoolgirl, and Phoebe, the disdainful object of Silvius’s desperate affection. The latter two are played as backwoods hicks in overalls, caught up in a love triangle (quadrangle really) with Ganymede and Orlando, played with passion and wide-eyed innocence by Deaon Giffin-Pressley. As Silvius, Gregory Boover ably accompanies the plentiful songs on guitar.

Touchstone, the fool, is here female, and her lover is now Aubrey instead of Audrey. As played by MaConnia Chesser and Thomas Brazzle (who is also the dastardly Oliver), they are as lusty and bursting with earthy puns, commenting on the love travails of the others.

The play touches lightly on its themes of love (love at first sight, love between brothers and sisters, lusty love) and the benefits of nature over the artificial constraints of life at court (especially appropriate for a production set in our beautiful Berkshires). But mostly it’s just a romp, with happy endings all around.