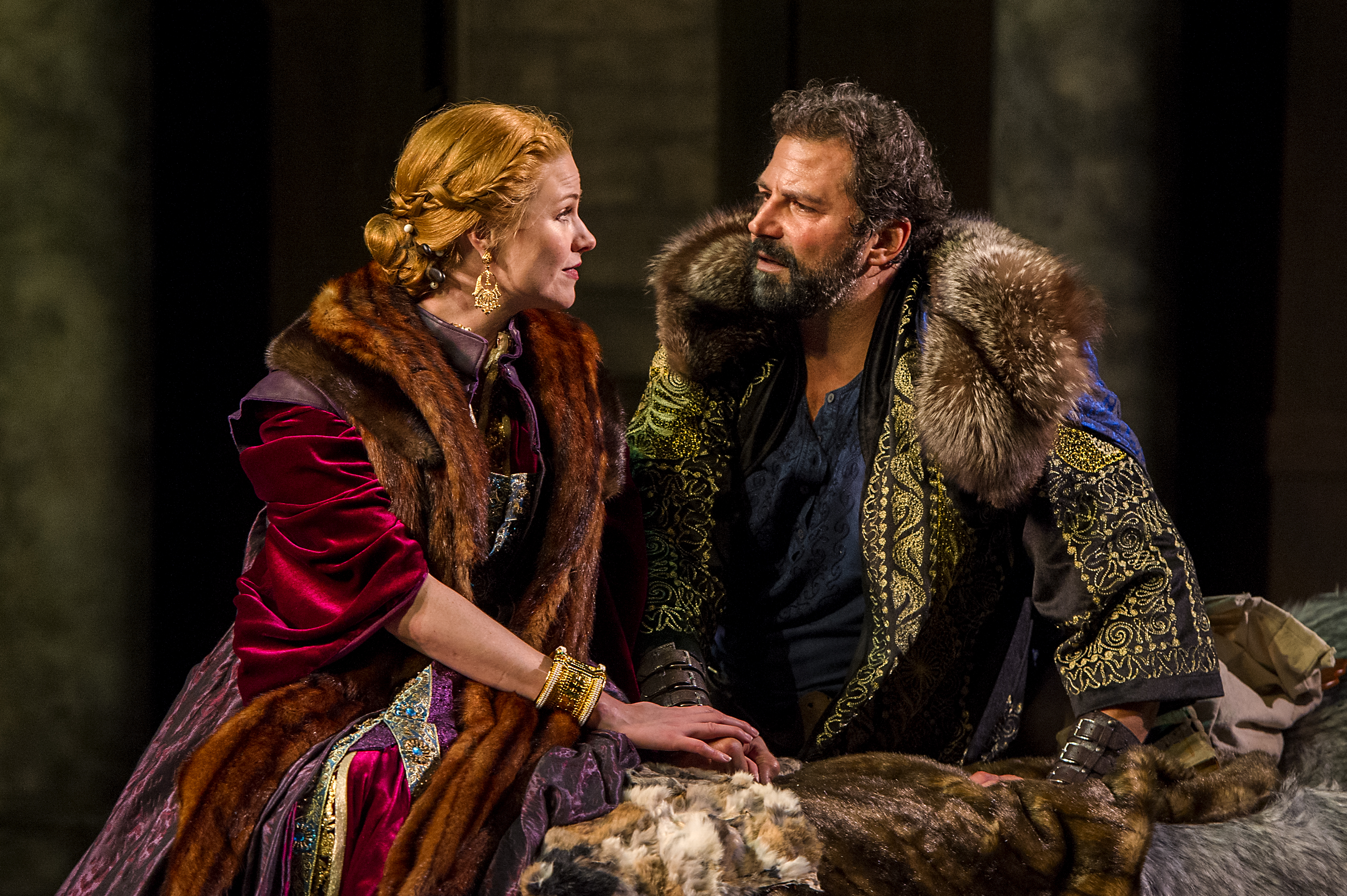 Gertrude and Claudius, Barrington Stage Company’s newest offering by Mark St. Germain, based on John Updike’s 2000 novel by the same name, might well have been called simply Gertrude, for this is her story.  A prequel to Shakespeare’s Hamlet, the play traces thirty years in the life of Hamlet’s mother.

The action opens with a loud confrontation between the young Gertrude (Kate MacCluggage) and her father (Greg Thornton), who insists that she marry the man to whom she has been pledged:  Amleth (Douglas Rees), subsequently King of Denmark and father of Prince Hamlet. Gertrude balks.  Although the play is set in the Late Medieval and Early Renaissance age, Gertrude’s feminist attitude would appear to sprout more properly from the #Metoo era.  Eventually submitting to her father’s demands, the unhappy bride spends much of her life (and nearly the entire play) struggling against a husband she finds “unsubtle,” (nicknamed “the Hammer”), having married her for a “crown and a country,” a man whom she does not and never will love.

Finding herself alone (King Amleth is off fighting wars, and her son Hamlet [Nick La Medica], who ignores or mocks her when he’s home, is off studying perpetually at the University of Wittenberg), Gertrude trades letters with the King’s younger brother, Claudius (Elijah Alexander), who journeys abroad in a vain attempt to cool his love for her.  Jealous of her brother-in-law’s freedom to travel and miserable on her own, Gertrude commands Claudius to return and initiates trysts in a hunting lodge owned by her adviser, Polonius (Rocco Sisto).  Their liaison, unwittingly revealed to the King via a religious confession by Gertrude’s serving woman, Herda (Mary Stout), leads to an angry confrontation between the brothers that in turn results in the orchard-poisoning of Amleth, the “o’erhasty” wedding of the newly-crowned King Claudius and Gertrude, and the return of Hamlet—all events familiar to us from Shakespeare’s tragedy (including substantial quotes from that work).

Although the play offers a window into Gertrude’s motivations in an apparent attempt to justify (or at least explain) her actions, we don’t learn much about the world around her, except for some talk about different approaches to Christianity, whose followers include Amleth, Polonius and Herda (complete with the reflection of a cross on the great wooden door of the castle), and a fascinating (if seemingly digressive) discussion—and demonstration—of falconry.  Plaudits to Brandon Hardy, the puppet designer, for his work on the birds, and on the puppet stage with its Commedia characters–Punch and Judy—and their slapstick.  St. Germain attributes to Hamlet (based on the affinity of Shakespeare’s character for a travelling troupe of actors), an interest in puppetry and a desire to be an actor, both on and off stage.  But what important light does this play shed on the story that Shakespeare has not already illuminated?

Director Julianne Boyd (Artistic Director of Barrington Stage Company) and her design team have created a sumptuous production, from Lee Savage’s gorgeous stone castle with its columns, crenellations, archways, arrow-slit windows, and tiny lights embedded within its walls, to Sara Jean Tosetti’s magnificent fur-lined, bejeweled costumes and dazzling, flowing capes, to David Lander’s striking lighting above and along the castle walls, through its small windows, lanterns, and large chandeliers descending from the flies.  In an attempt to establish different locations, stagehands (and sometimes actors as well) are required to remove and replace set pieces after each scene.  Despite the lovely, period-sounding music (by composer Jenny Giering) covering these changes, it might have been better to use the whole stage where designated areas could remain throughout the production.  In that way, Boyd, who directs the action mostly downstage center, could have used every part of the stage.

With the help of medieval accoutrements (including deer heads, bear rugs, a mounted tapestry used for embroidery, armor, banners, thrones), the sounds of crowds, trumpets, horses (provided by sound designer Lindsay Jones) and period wedding-dance choreography by Barbara Allen, the actors looked good and adapted well to their surroundings.  However, although they achieve the broad outlines of each scene, even eliciting laughs at times (especially Stout’s Herda, a descendent of  Juliet’s nurse, and Sisto’s Polonius, whose second act ramblings finally begin to resemble Shakespeare’s addled old man), the actors need more rehearsal in order to mine the relationships in the play.  MacCluggage’s Gertrude seems to care more about proving herself superior to men—witness her insistence on receiving the three gifts promised to her by Alexander’s Claudius–rather than entering into a loving relationship with him.  Then at the end of the first act, as the actors literally move towards one another, they each stop and turn to the audience to declare overblown passions that we haven’t seen developing.  A similar problem exists in the encounter between Amleth and Claudius–there is much more baggage between them that should have been revealed in this scene.

Patrons of Barrington Stage Company have long enjoyed the excellent plays of Mark St. Germain (Freud’s Last Session, Dr. Ruth, All the Way, The Best of Enemies, Dancing Lessons, Camping with Henry and Tom).  Gertrude and Claudius, having won the 2018 Edgerton Foundation New Play Award and premiering earlier this year at Orlando Shakes in Florida, though well-written and beautifully designed, is so dependent on Shakespeare’s masterpiece that it has difficulty standing on its own.

Gertrude and Claudius runs from July 18—August 3.  Tickets may be purchased online at barringtonstageco.org or call 413-236-8888.