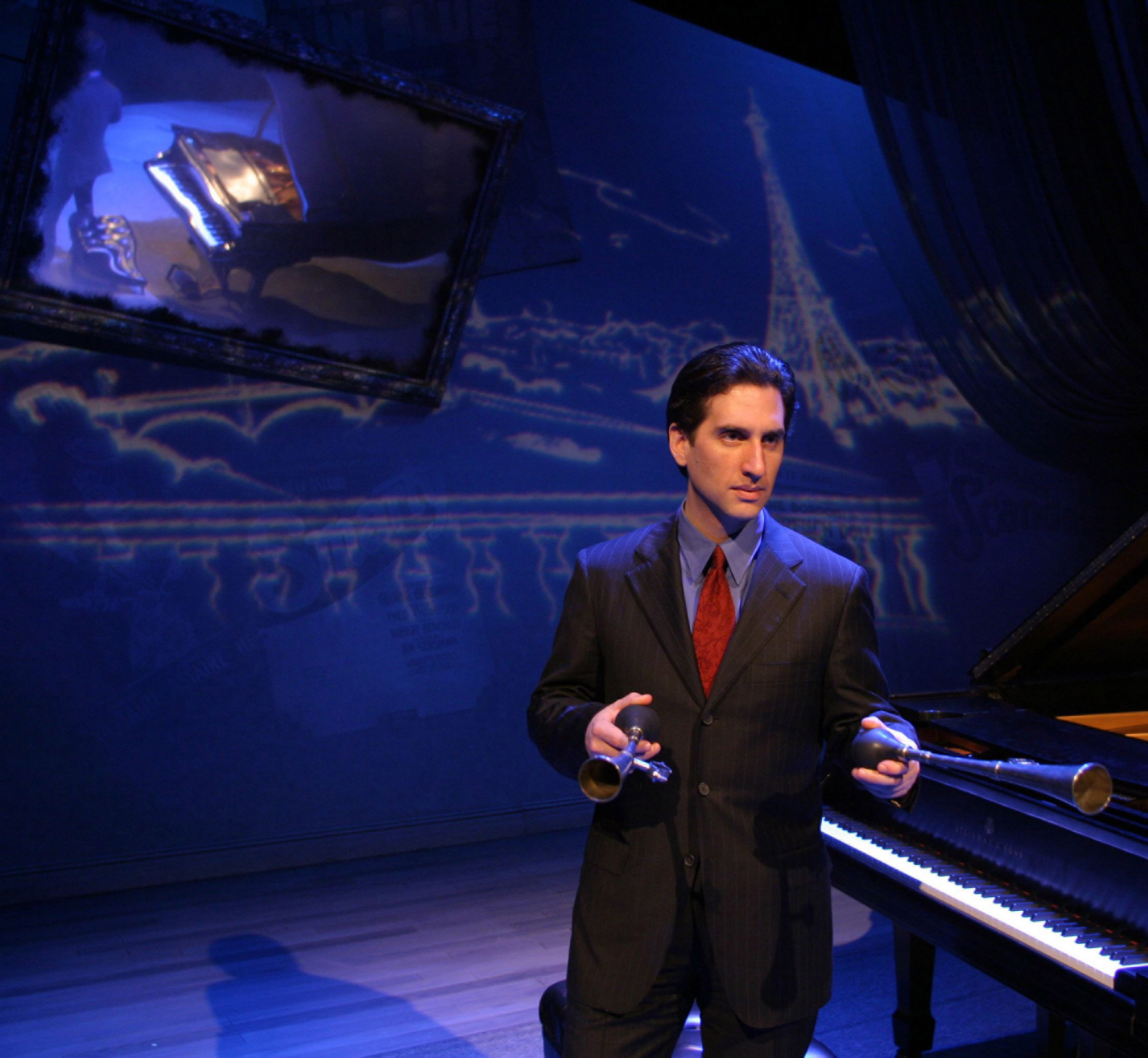 During the question and answer session that concludes his solo production, George Gershwin Alone, Hershey Felder was asked by an audience member at Berkshire Theatre Group’s Colonial Theatre why he did not choose to be a concert pianist.  His response was that in performing his nine distinctive one-man shows he plays more concerts than any other pianist in the world:  almost four hundred per year.  To those who say that one cannot combine acting with piano-playing, Felder points to the shows he has created, each about a brilliant composer/pianist, using first person narration, accompanied by their music.

There have been other celebrated pianist/entertainers like Liberace and Victor Borge, but Felder’s plays with music are a unique blend of genres. Painstakingly researched, they are distinguishable from Michael Feinstein’s presentations because Felder is not only a singer/pianist but also an accomplished actor who knows how to bring a character to life and to interact with his audience.  In addition to Gershwin, he has resuscitated such greats as Chopin, Beethoven, Bernstein, Liszt, Berlin, and Tchaikovsky and has several more in the works.

Previously staged on Broadway, George Gershwin Alone is directed by Tony Award-nominee Joel Zwick, who has also collaborated with Felder on Beethoven and Maestro (Leonard Bernstein).  Zwick is an actor, drama professor, and a theatrical, television and film (My Big Fat Greek Wedding) director.  This run of George Gershwin Alone, unfortunately only one week in duration, should be seen before it closes.

In the course of a packed ninety minutes we hear scratchy old recordings of George and Ira Gershwin’s music and songs, we learn about music theory (who knew that the same two repeating chords that introduce  Summertime were given a totally different approach by John Williams in Jaws!) and study the critical and controversial influence of jazz.  Projected upstage are large photographs of the people and historical places prominent in Gershwin’s life as Felder traces his career in America and later Paris.  Beginning chronologically in 1898 with the composer’s birth in New York City to Russian immigrant parents, Felder regales us with personal stories revealing the ups and downs experienced by Gershwin, all the while playing his memorable music, including a complete rendition of Rhapsody in Blue.

Through Felder’s impersonations, we meet Gershwin’s family, friends, teachers, employers, and the many artists and musicians he knew. There was Al Jolson, for whom he wrote Swanee (he sounded as though he had “a megaphone in the middle of his throat”), and Ethel Merman (whose voice “sounded the same as Jolson”), Paul Whiteman, who commissioned  Rhapsody in Blue, which imitated the sound of a train on which Gershwin traveled and the noise of the cities he passed, DuBose Heyward and his wife Dorothy, who helped Gershwin adapt Heyward’s novel into the opera Porgy and Bess, and Kitty Carlisle, who admitted to  Felder in an interview for this show that her mother wanted her to marry Gershwin.

Though the performance is infused with humor, Felder also personalizes Gershwin’s physical pain, in the form of terrible headaches, which were eventually diagnosed to be the result of a brain tumor that killed him at the age of 38, as well as the emotional pain caused by some wretched reviews of An American in Paris and Porgy and Bess.  In addition, he  suffered the indignity of the anti-Semitic, racist attacks on his religion and music by Henry Ford in the Dearborn Independent.

The production is a pleasure for the eyes as well as the ears, thanks to  the work of Lighting Designer Michael T. Gilliam, whose colorful palette not only matches the mood of each piece, but can also focus, laser-like, on Felder’s hands, when the rest of the stage fades to black.  Sound Designer Erik Carstensen’s use of original recordings of well-known songs injects period authenticity into the production.

After Felder’s performance was officially over, he asked the audience which songs they would like him to play (Gershwin wrote over one thousand of them).  He then located the music for the requested selections in the oversize books he kept on a desk nearby (some of which were original scores), and supplied the words as willing patrons sang along, following which he answered questions.  Felder talked of the great artists he has researched and impersonated in his shows, and how they put the human condition into their art in order to make the world more beautiful, more elegant, and finally, something we have lost today—more civil.  As the evening drew to a close, Felder played Clair de Lune by Debussy, whose music had a great influence on Gershwin—a perfect example of beauty in the world.

GEORGE GERSHWIN ALONE runs from August 24—31.  Tickets may be purchased online at www.BerkshireTheatreGroup.org or call 413-997-4444.