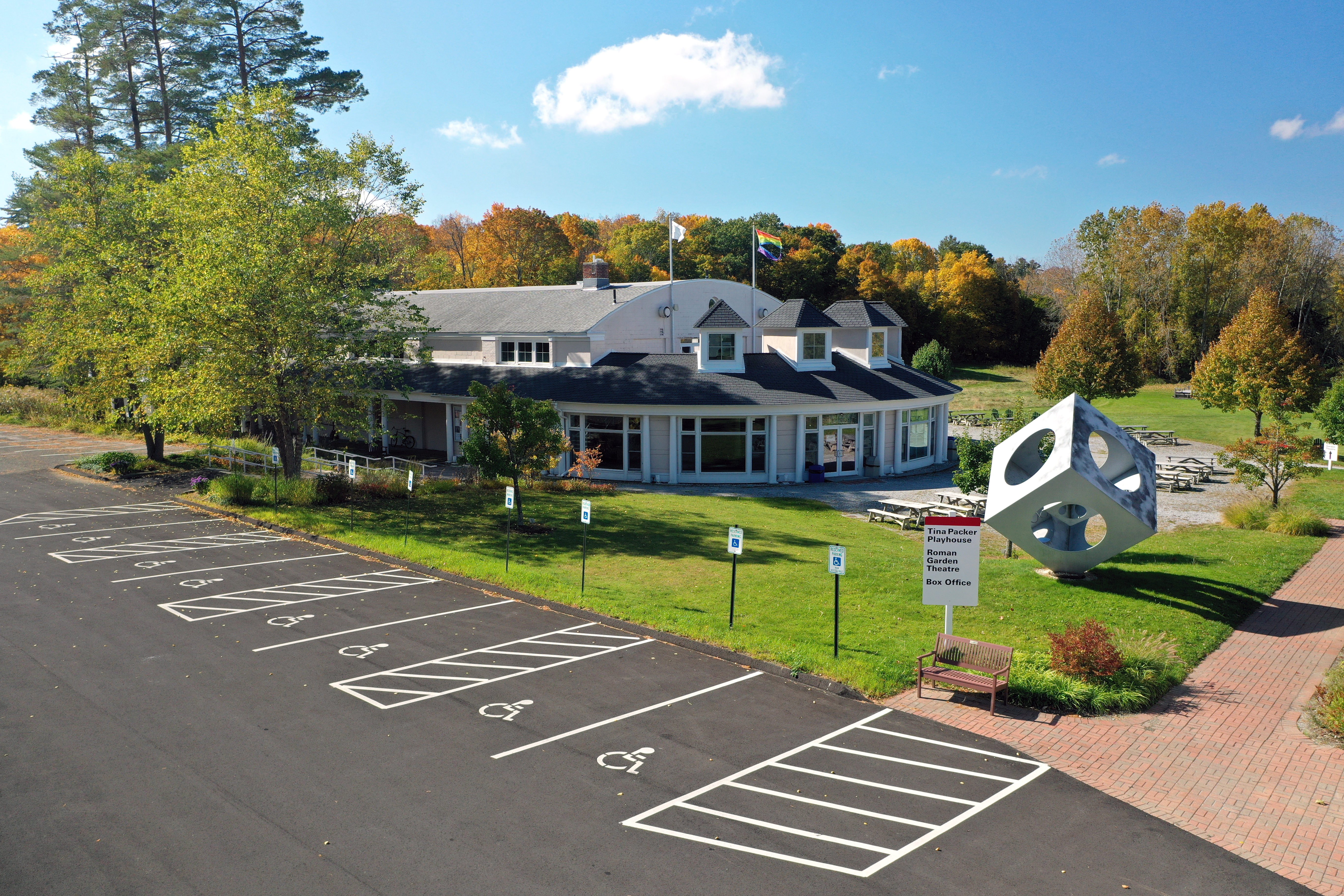 (Lenox, MA) –  Shakespeare & Company is excited to announce its 2020 summer season, May 21 – October 18, 2020. Under the theme “The Labyrinth of Love” the season includes Shakespeare titles: King Lear, Much Ado About Nothing, The Comedy of Errors, and, in a special workshop production, Measure for Measure. The contemporary plays this season are The Lifespan of a Fact by Jeremy Kareken, David Murrell, and Gordon Farrell; What Rhymes With America, by the Obie Award-winning playwright Melissa James Gibson; Row After Row by Jessica Dickey; Susan Smith Blackburn Award and Obie Award winner My Left Breast by Susan Miller; and Laurence Olivier Award winner Betrayal by Harold Pinter.

“We’re eager to dig into the stories we have planned for this summer,” said Artistic Director Allyn Burrows. “It’s a great honor to welcome Christopher Lloyd to our mainstage in the title role of King Lear, directed by the wonderful Nicole Ricciardi. We pop into the Roman Garden Theatre with Much Ado About Nothing, directed by the talented Kelly Galvin, and are excited for the Comedy of Errors, directed by the master of clown, Michael F. Toomey.”

“The Labyrinth of Love is the overarching theme of the season, as just about every show explores some aspect of love—the hope for it, the sting of it, the joy of it, the ache of it,” continued Burrows. “The modern plays continue in that vein with the accomplished James Warwick directing The Lifespan of a Fact, the estimable Tina Packer directing Row After Row, and the amazing Regge Life directing Pinter’s classic, Betrayal. We’ll present the sublime What Rhymes with America directed by the  gifted Normi Noel, and are thrilled to have the superb Alice Reagan back to direct a workshop of Measure for Measure, as well as the brilliant Nela Wagman to direct a reading of the powerful piece, My Left Breast.”

“The Lifespan of a Fact engaged me immediately,” said Warwick. “Even with a discerning ear and analytical eye on all the news that we get fed every day, how do we know what to trust? What are the facts, and how are they distilled, spun, and marketed—to sell, engage, and entertain? This play asks all this and more, with dialogue that is funny, thought-provoking, and incredibly current.”

“Row After Row is a multi-layered play that looks at our desire to exalt in the past and perhaps understand our present, as we fumble our way to the future,” said Founding Artistic Director Tina Packer. “Set in this present moment in time, we get flung back into the Civil War and struggle to understand not just the mentality that makes us want to fight, but how we might possibly find a way to peace, unity, and a desire to be with people we are suspicious about.”

“I’m thrilled to be taking on this piece by fellow Canadian, Melissa James Gibson,” said Noel. “Her writing evokes Samuel Becket for me, nuanced, funny, aching to make connection.”

“Betrayal is a favorite of mine,” said Life. “I saw the original production on Broadway and was fascinated by the twist in the storytelling that starts with the end and unpacks the story in reverse. Marriage is a bond, a bond consummated by vows—vows of fidelity, honesty and trust. Partners share and celebrate their love, but what about that primal energy that can drive us beyond these bonds—lust. There is a ‘law of attraction’ that cannot be resisted, a law that creates secrets and lies. Betrayal is about these primal feelings where we betray not only the ones we love, but also ourselves.”

“In Measure for Measure, young people are thrust into positions of power for which they are ill-equipped, with disturbing and violent result,” said Reagan. “Angelo is suddenly appointed sovereign of a chaotic and debauched city. He restores order with repressive laws and an iron fist of justice. Isabella, one of the most interesting and complex women Shakespeare created, is given a brutal choice: to save her brother’s life she must give up her body, and consequently, her soul. When sex becomes the ultimate tool of manipulation, relations between women and men become twisted, perverse—and trust disappears on both sides.”

“I have had the privilege to direct Susan Miller’s play My Left Breast since it’s first developmental workshop, its premiere at Actors’ Theatre of Louisville, and it’s Obie-winning Watermark Theater production in New York City,” said Wagman. “This astonishing play continues to inspire me with its wry, often laugh-out-loud humor, courage, and insight. A contemplation of love, loss, self-acceptance, and survival, the play charts a journey that speaks to everyone, men and women, lovers and friends, parents and children.”

In this blistering comedy an exacting fact checker takes a famous writer to task for bending the reality of a tragic incident to serve the art of his narrative in the retelling of it. The survival of a prominent magazine depends on the article being a success. Sparks fly and a deadline looms as the editor referees a pitched battle between accuracy and the truth, and who’s to say what that is?

Courage takes many forms. An intrepid woman’s humorous and moving encounters with relationships, parenthood, cancer, and her ever-changing self are charted in this searingly honest solo piece.

As he struggles to stay connected with his daughter, Hank’s life seems to be unraveling in a most persistent manner. In this poignant and touching portrait of the trials of modern American life, Obie Award winner Melissa James Gibson offers a compassionate sketch of how to hold on. Who do you turn to when the ground starts to give way under your feet? At the end of the day, maybe a sense of humor is your best friend.

Beatrice and Benedick can’t stand each other, or so they would have everyone believe. Those who know them know better, and hatch a hysterical plot to have the true feelings of these reluctant lovers revealed. At the same time, young love blossoms between Benedick’s friend Claudio and the governor’s daughter Hero. But when their love is undermined by an act of treachery, lives and relationships in Messina may be ruined forever. Who will be able to see the truth? And who will have the courage to speak it? A spirited celebration of true love and friendship, Much Ado About Nothing features some of Shakespeare’s most satisfying language—and two of his most beloved characters, Beatrice and Benedick, whose wit and vulnerability make us laugh and remind us what it means to entrust our hearts to one another.

Generously sponsored by The Dr. Gerald and Roberta Friedman Foundation.

Two Civil War reenactors walk into a bar…When they encounter Leah at their usual table after the annual battle of Gettysburg, Tom and Cal get knocked out of their comfort zone, back and forth in time, and into a search for meaning. The toll of sacrifice is the backdrop of this humorous journey for these three to find themselves and their small but significant place in history and the world.

When Angelo is abruptly appointed to rule over a chaotic and debauched city, he restores order with repressive laws and an iron fist over licentiousness. The object of his own twisted desire is a young nun, whom he puts in an unthinkable position. “To whom shall I complain?” is all that young Isabella can utter when she finds herself the target of his abuse of power. Justice can never come soon enough.

In this Olivier Award-winning classic, Harold Pinter brings his savagely tight dialogue and powerful pauses to every interaction these intertwined souls share.  Jerry and Emma carry on a seven year affair under the nose of Emma’s husband and Jerry’s best friend, Robert, only to discover, with poetic precision, the fallout of deception.

Tickets
3-Show and 6-Show FLEXpasses are on sale now. FLEXpass advantages include: Up to 40% off regular ticket prices, ability to book shows and seats one week earlier than the general public, and a waiver of the exchange fees.

Shakespeare & Company will once again offer a 40% discount to full-time, year-round Berkshire County residents (excludes Saturday nights, opening nights, and previews). The Company also continues its commitment to the EBT Card to Culture Program, offering a $5 performance ticket to all EBT Cardholders. The discounted tickets can be reserved over the phone, online, and in-person at the Box Office. Cardholders will be required to show their card at the Box Office when picking up tickets, and processing fees will also be waived.The Tina Packer Playhouse, Roman Garden Theatre, and the Elayne P. Bernstein Theatre are wheelchair accessible. For more information on our summer performance season or our year-round programming, call the Box Office at (413) 637-3353 or visit www.shakespeare.org.

2020 GALA: Honoring Co-founder & Director of Education Kevin G. Coleman
Shakespeare & Company’s 2020 Gala will be held Saturday, June 27, 2020.  This year the Company salutes Co-founder and Director of Education, Kevin G. Coleman, for the indelible impact he has made on The Berkshires’ cultural community through his work as an actor, director, and visionary of The Education Program at Shakespeare & Company. Following cocktails and special performances, guests will join Shakespeare & Company artists for a delectable catered dinner and spirited dance party under the gala tent. For 2020 Gala information or to reserve your seats, please click here or call Natalie Johnsonius Neubert at 413-637-1199 ext. 180.