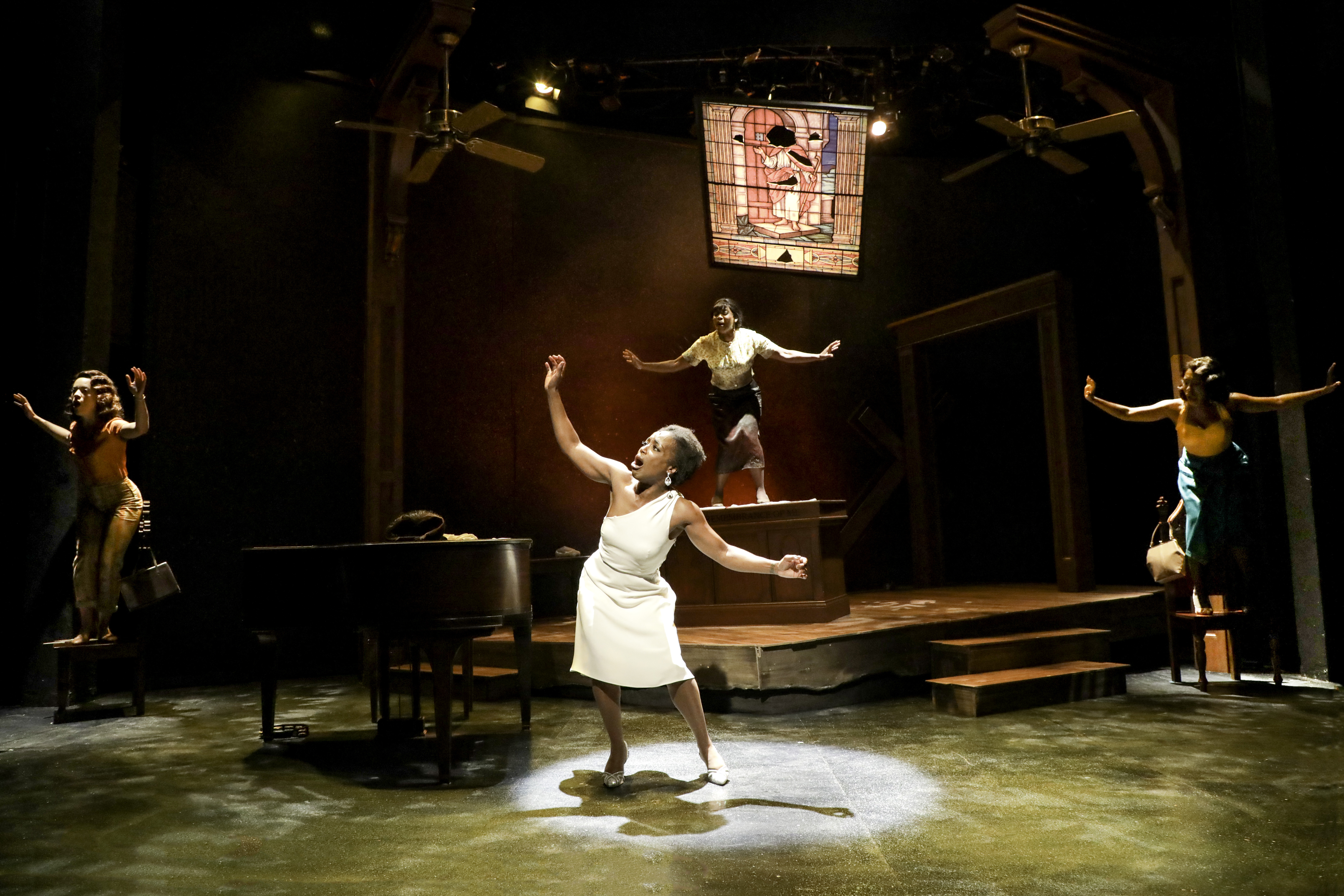 Nina Simone was an iconic singer during the 1960’s through ‘80’s specializing in pop, rock, soul and R&B, what she called Black classical music.  Nina Simone: Four Women by Christina Ham currently at Berkshire Theatre Group’s Unicorn Theatre in Stockbridge, Massachusetts, is a biographical play with music that examines Simone’s conversion to activism after the bombing of the Birmingham, Alabama, 16th Street Baptist Church that killed four young black girls.

We learn that Simone struggled through her childhood while showing signs of musical brilliance.  Her ambition to be the first black female classical musician was thwarted when she was denied a scholarship to a music school due to her color.  That compelled her to perform in nightclubs, which her preacher-mother described as “being in the fires of hell.”  But she persisted through the popular music world to become an international success.  The bombing of the church in 1963 redirected her passions.

The play ostensibly takes place in the ruins of that church where Simone (Felicia Curry) is composing one of her major songs… “Mississippi Goddam.”  She is visited by three black women: Aunt Sarah (Darlecia Cearcy,) a housemaid, Sephronia (Sasha Hutchings,) a teacher, and Sweet Thing (Najah Netzberger,) a hooker.  It is not a surprise that each character is named in Simone’s song “Four Women;” each one represents a female African-American stereotype.  Simone wrote and recorded the song in the 1960’s.  Much of the women’s conversation and argument concerns not only the civil rights crusades of the ‘60’s – including the assassination of Medgar Evers, the march on Washington and, more importantly to them, the marginal role of women in Black society.

The script is problematic. Every right-thinking person in our country empathizes and sympathizes with the oppressive conditions imposed upon African-Americans; however, the play focuses on these issues with repetition and redundancy lending the work a certain amount of tedium.  A number of the various characters’ speeches, especially Simone’s, are preachy and self-indulgent.

The performances are, for the most part, dynamic, though Cearcy’s vocal projection occasionally falters.  She has, however, a magnificent singing voice.  Curry’s Simone is a powerhouse who drives the production with inexhaustible energy and nuanced line delivery. In contrast, Hutchings’ Sephronia is generally much more controlled and intellectually directed given her career as an educator.  She does have a superficially drawn conflict with Sweet Thing over a man that goes nowhere.  Netzberger’s prostitute is sketchily drawn and virtually stereotypical.

Gerry McIntyre has directed the production and choreographed it as well which is the major strength of the play.  He designs the numbers as movement pieces rather than dancing performances giving texture and vitality to the various numbers.

The songs are from Simone’s music history starting with the Gershwins’  “I Loves You Porgy” going on to gospel numbers like “His Eye is On the Sparrow” and a reinterpretation of Bert Williams’ “Nobody.”  Simone wrote a song with Lorraine Hansberry, “To Be Young Gifted and Black,” for Hansberry’s unfinished play of the same name.  At  the play’s ending Four Women becomes a celebration of the lives of the young female victims of the blast.

Randall Parson’s set of a space in the church appears to be too neat for a building that has suffered a bomb blast.  The design does employ different levels giving an interesting depth to the stage.  The lighting of Matthew E. Adelson is very dramatic enhancing the conflicts and scenic tones throughout the play.  The costumes by Sarafina Bush suggest the daily role of each woman.

The show is effective for its performances, thematic statements and music, but the script needs editing; otherwise, it just bounces from one history lesson to the next.

There is, onstage at the Berkshire Theatre Group’s Unicorn Theatre, an astonishing tribute that is explosive, regal, heart-rending, and awe-inspiring. Nina Simone: Four Women, written by Christina Ham, offers an impressionistic exploration of what propelled the iconic musician to a life and career devoted to civil rights activism.

Four Women is the title of a song Simone composed and sang in tribute to the four girls murdered in 16th Street Baptist Church bombing in 1963. Most of the play takes place on that very day. Initially, the stage reveals Nina Simone (Felicia Curry) singing “I Loves You Porgy,” the first hit single that established her nationally as a singer in 1958. Curry’s voice and delivery are remarkably similar to Simone’s, yet her performance is indelibly her own, full of depth and fire. In short order we find ourselves on the day of the bombing, as the lights come up to reveal a church basement with a grand piano. A second, third, and fourth woman join her onstage. Each woman represents one of the four Black women Simone describes in her song, “Four Women“: Aunt Sarah (Darlesia Cearcy); Sephronia (Sasha Hutchings); and Sweet Thing (Naja Hetsberger).

According to information supplied by the Berkshire Theatre Group, “Scholar and artist Thulani Davis called the song ‘an instantly accessible analysis of the damning legacy of slavery, that made iconographic the real women we knew and would become.’”

Cearcy, Hutchings, and Hetsberger have burnished, compelling, distinctive voices, and hearing them sing, individually or together, is an exhilarating experience. Director/Choreographer Gerry McIntyre’s work suits the impressionistic work with skill, grace, and a clear understanding of Simone’s accomplishments. The play never ceases to be visually appealing, thanks also to Randell Parsons’ scenic design and Sarafina Bush’s fine costumes. Danté Harrell’s music direction is imaginatively rich and on point.

Integral to this production are the unusually powerful effects of light (designed by Matthew E. Adelson) and sound (designed by Kaique “Kai” DeSouza). The entire theater vibrates as we hear a nearby bomb go off, killing four girls. The flashing lights are as startling as the sound of the explosion.

Nina Simone’s music, compelling and moving, is lovingly represented in the show. Most of the songs we hear were written and composed by Simone herself; she recorded all of them. I have heard recordings of “Mississippi Goddam”, but watching Curry perform it, bursting with rage and sorrow, was utterly arresting.

McIntyre writes, “At a time when people are feeling the need to do something in our hurting world but don’t know how to start, this production is an incredible reminder that you just need to take the first step…” I agree. Nina Simone had a difficult life. Her devotion to civil rights was unquestionable, even though as her activism increased, her success in the music industry declined, most likely because she was unapologetically outspoken about racism and her opposition to the Vietnam War. She made people uncomfortable. It’s a testament to her genius that 18 years after her death, she still does.