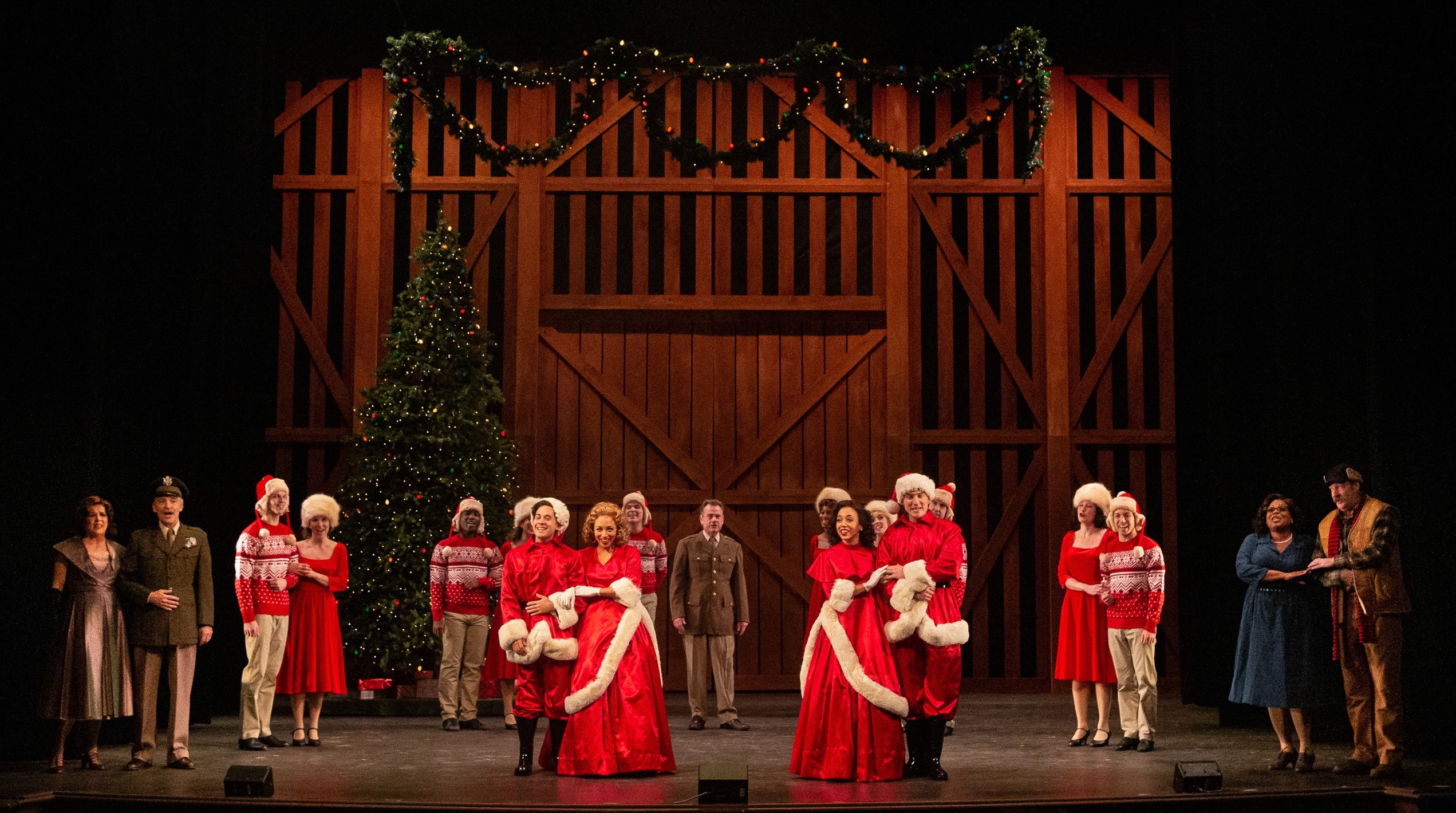 If you are looking for a night out to immerse yourself in the Christmas spirit, Irving Berlin’s White Christmas, the Musical is sure to do just that. The Berkshire Theatre Group has just the ticket—a sweet and nostalgic, toe-tapping, all-around fun night at the theatre.

There is probably little need to review the plot of this 2004 musical version, as it is based on the Paramount Picture movie that is a staple of the Christmas season. With the unforgettable music of Irving Berlin, David Ives and Paul Blake have creatively adapted the film classic by Norman Krasna, Norman Panama, and Melvin Frank. The writers have simplified and tightened up the plot and expanded at least one major supporting role to give the show sustained momentum and verve. The adaptation makes the plot easy to follow so you can enjoy the romance and thrilling song and dance.

The scene begins on the Western front during World War II, Christmas eve, 1944. We meet three army buddies, Bob, Phil, and Sheldrake and General Waverly as the GIs attempt to cheer up the troops on the battlefield. Scene 2 fast forwards ten years to 1954 in a happier post-war America. Bob and Phil are now a big song-and-dance team appearing on the Ed Sullivan show. After a show-stopping performance of “Let Yourself Go,” the guys meet two sisters, Betty and Judy, who are an aspiring “sister act,” heading off to a remote inn in Vermont for their next gig. In short order, the guys join the pretty girls on the train.

Upon arrival in Vermont, the couples find that everyone has left the inn because there is no snow. Also, they learn their dear General Waverly is the owner of the failing inn. Bob and Phil decide to ensure that Betty and Judy keep their job and turn around the General’s fortunes by producing a big Christmas show and inviting the GIs in their unit to come up to see it. Rehearsals and romance ensue as the somewhat cheesy plot is bolstered by three love stories: Bob and Betty, Judy and Phil, and the General and Martha. Martha is the General’s factotum at the inn (a character that is expanded and enriched in this version of the story.)

The Berlin songs are delightful, offering nostalgia, catchy lyrics, and singable music. How charming to be able to understand the words and come away humming multiple melodies. This relatively new musical is in the mold of a classical book musical.

BTG has assembled a top-notch cast and they are effectively staged by Director Gregg Edelman. Michael Wartella stars as Bob and he definitively makes the role his own. He is an excellent song stylist and perfectly at ease as the sensitive one of the male duo. Standing in the shadow of Bing Crosby, who played Bob in the film, Wartella totally captures the 1950s song-and-dance man. Michael Starr takes on the role of Phil (played by Danny Kaye in the movie) with equal success. He is funny, debonair, and, like Wartella, a terrific singer and dancer.

The “sister act” of Betty and Judy is performed by two actual (and amazingly talented) sisters, Claire and Alanna Saunders. Claire plays Betty—the hard-to-get blonde (a role originated by Rosemary Clooney) and Alanna plays Judy—the ready-to-settle-down sister (originated by Vera-Ellen). They are beautiful and fabulous performers, whether singing, dancing, or acting. A twin triple-threat!

In case you are wondering if these actors are as good or similar to the movie stars, I suggest you set those preconceptions and expectations aside. Fortunately, there is no attempt to create a stage version of a movie here and there is no need to. White Christmas, the Musical stands on its own merits and is best enjoyed on its own terms.

The headliners are well supported by a young and energetic ensemble and supporting roles. David Adkins is perfectly believable as Henry Waverly, the avuncular and beloved general. Allison Briner Dardenne is a standout out as Martha, the housekeeper at the inn. In this version of the story, she is a former stage star in the mold of Ethel Merman. Her song “Let Me Sing and I Am Happy” is a showstopper. Madison Cyrulik is adorable as Susan, the granddaughter of the general. Her duet with Bob of “Count Your Blessings Instead of Sheep,” set against a starry sky, is totally charming and emotionally moving.

White Christmas is chocked full of great song and dance, from the splashy Ed Sullivan Show extravaganza of “Let Yourself Go,” to the nostalgic “I Love a Piano” to the really big finish of “White Christmas.” Berlin’s score entertains, amuses, and warms the heart. The choreography of Gerry McIntyre and Bryan Thomas Hunt is a energetic and appropriate to the period. Most of the dances are tap dance – an inevitably happy dance. The 7-piece orchestra, directed by Ross Patterson, gives it their all, playing with gusto, although the overall sound at times lacks force.

The setting (Randall Parsons) and lighting (Matthew E. Adelson) are serviceable. But the standout designer here is Elivia Bovenzi Blitz who brings to the stage some of the most colorful and glitzy Christmas costumes imaginable. The green satin jackets of the song-and-dance men, the beautiful gowns for the dances, and a “wow!” slinky black beaded gown for Betty’s solo at the Regency Room—are all amazing. The final all-out production number of “White Christmas” fills the stage with Santa suits and red satin dresses – a feast for the eye. With a cast of 20 and new costumes almost every entrance, Blitz does a magnificent job.

White Christmas, the Musical is a tremendously entertaining evening to be enjoyed by all. The opening night audience quickly rose to give a well-deserved standing ovation for this old fashioned and happy show, sure to please audiences of all ages.

IRVING BERLIN’S WHITE CHRISTMAS THE MUSICAL runs Saturday, December 4 through Thursday, December 23. Matinees are at 2:00 p.m. Evening performances are at 7:00 p.m. Check the website for specific performance dates. A sensory-friendly performance will be Tuesday, December 14th at 7 p.m. Tickets may be purchased online at www.BerkshireTheatreGroup.org or by calling (413) 997-4444. Check with the theatre regarding Covid restrictions.