REVIEW: “The Approach” at Shakespeare & Company 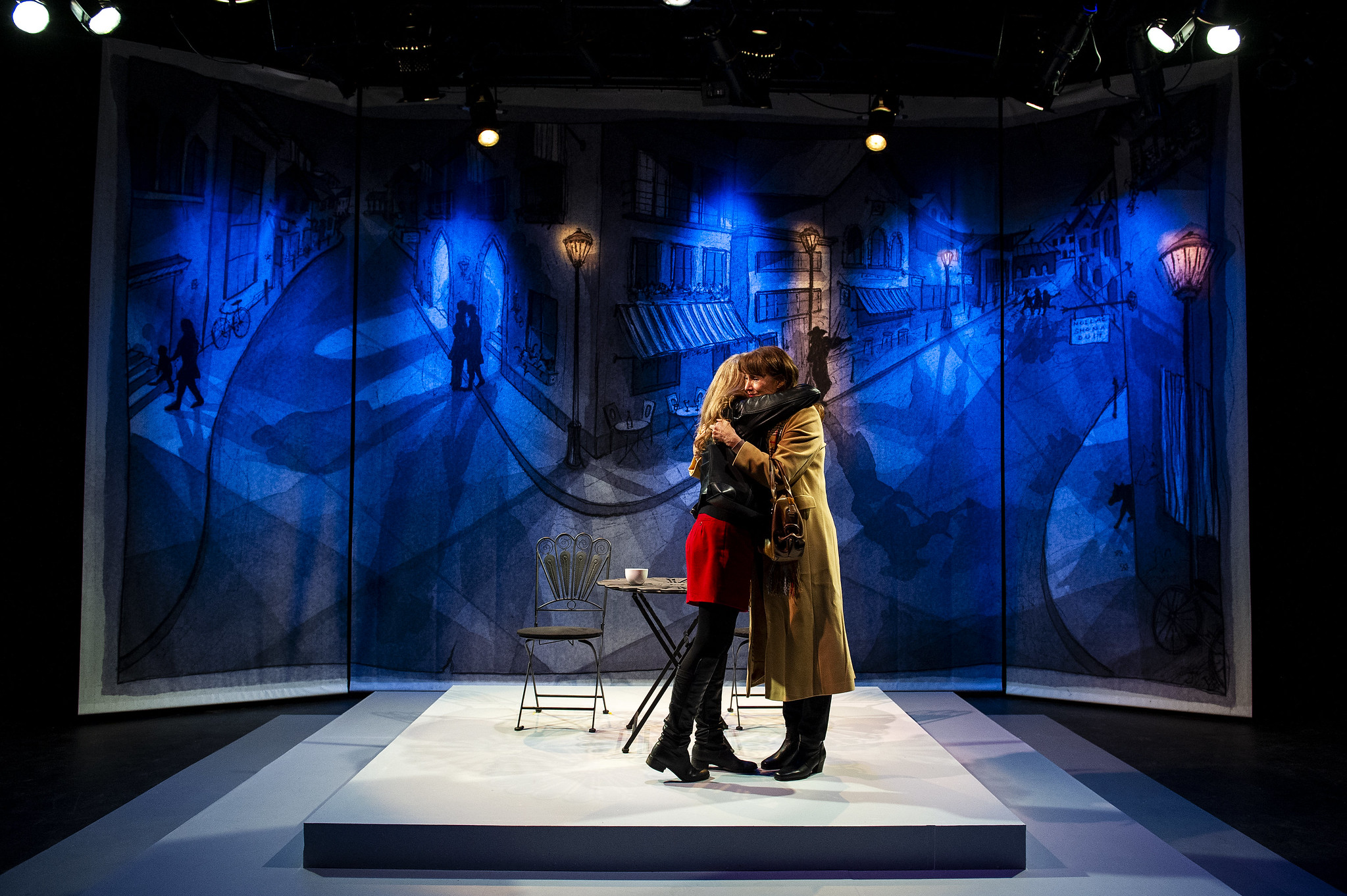 REVIEW: “The Approach” at Shakespeare & Company

“Mark O’Rowe’s play, The Approach, is a riddle….The story is told by what is not being said.”

–from the Directors’ Notes by Mark Farrell and Tina Packer

Onstage, at a cafe table, before an aptly expressionist backdrop depicting a bustling, shadowy Dublin street, we witness a series of dialogues between alternating pairings of women. The three actors who make up the cast of The Approach (Nicole Ansari as Cora; Elizabeth Aspenlieder as Denise; and Michelle Joyner as Anna) are riveting, even as the spoken language is at turns cryptic and disjointed. The full emotional investment of each player is unquestionable.

O’Rowe’s play, riddled with subtext, examines betrayal and connection. As good as the cast is, and they are VERY good, they cannot transmit so much subtext. I was fortunate enough to see the show when they had a talkback afterward, with the cast and the directors answering audience questions, and the three women generously describing their creations of backstories, or character histories. (There will be additional talkbacks with the cast and directors on Thursday, May 12, after the 7:30 pm show; Saturday, May 14, 7:30 pm show; Sunday, May 15, 3 pm show; Thursday,May 19, 7:30 pm show; Sunday, May 22, 3 pm show; Saturday, May 28, 7:30 pm show; and Thursday, May 26, 7:30 pm show.) I love a good talkback, but in this case I don’t think the play is accessible enough to stand on its own. I know that my experience of this particular show would not have been as fulfilling without it.

The direction is smooth and well-paced. Jim Youngerman’s set design, including the shadowy backdrop I previously mentioned, enhances the play in a way that’s both graceful and jolting. Katie Ward’s lighting marries wonderfully with the set, as does Brendan F. Doyle’s sound design. Govane Lohbaur’s costumes neatly augment the specificity of time and place in which The Approach is set.

But as to the aforementioned specificity of time and place, we are told the action is set in present-day Dublin. The three women, whom I would guess are meant to be in their late 30s, seem educated and intelligent. Why is so much of their dialogue, indeed their angst, connected to one man? I can’t help but feel that the playwright has a retrograde view of the psyche of adult women. Still, I recommend that you see the play and experience this stellar acting yourself. If you’re able, see one of the shows that has a scheduled talkback.

The Approach runs at Shakespeare & Company’s Elayne P. Bernstein Theatre through May 29. The show is approximately 1 hour and 40 minutes without an intermission. As the production contains subject matter about domestic violence and suicide, and therefore is not suitable for young children.