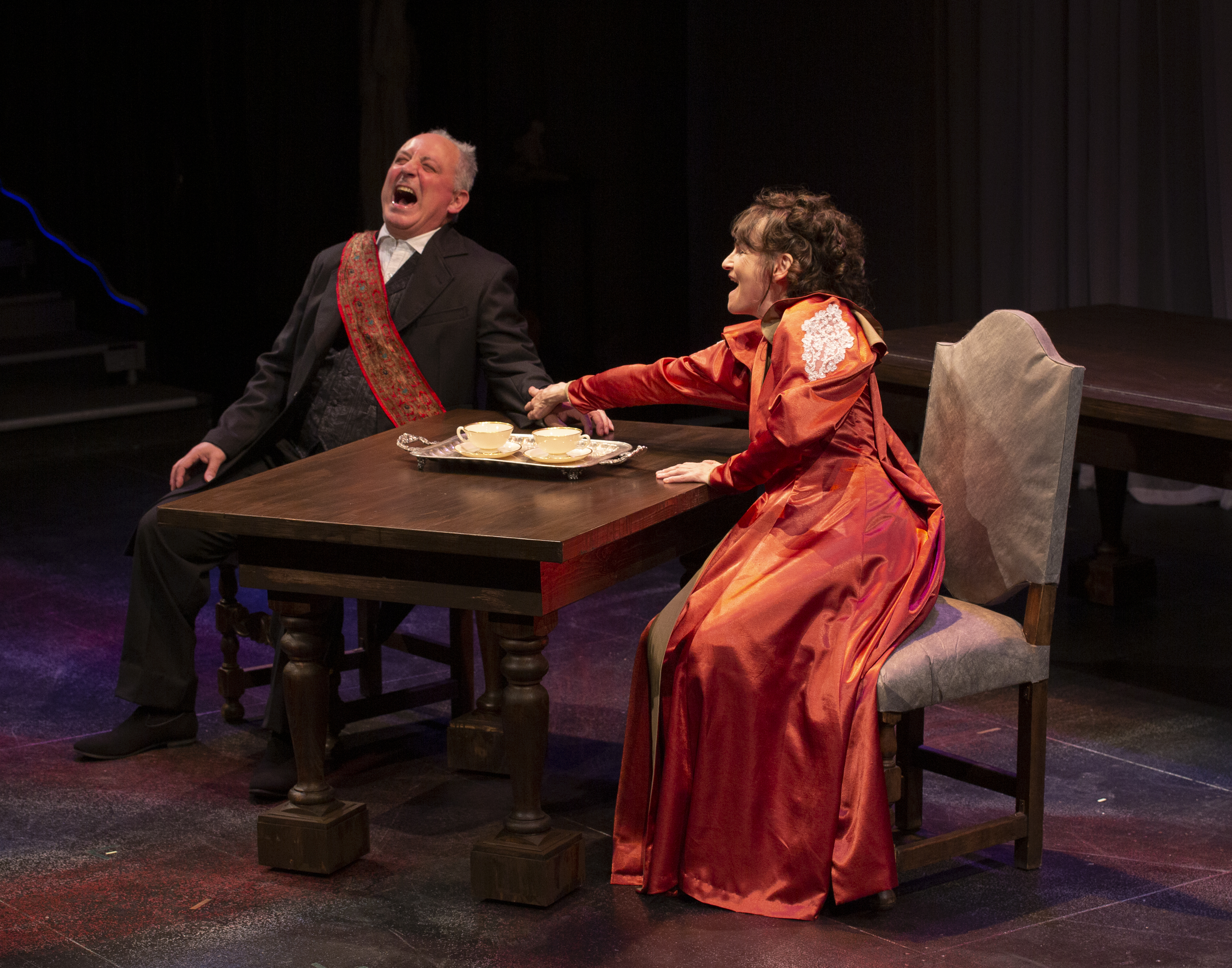 It has been said that a play is merely a blueprint until it receives a full production. Lady Randy, by Anne Undeland, is a perfect example of how a biographical play about Jennie Jerome, the mother of Winston Churchill, becomes an extraordinary theatrical event.

Undeland’s witty and well-researched play details Jerome’s life and lovers from 1859 to 1895, framed by her death in 1921.  She was one of the first “dollar princesses”–young American women of means who married British lords in order to gain a title:  Lady Randolph Churchill.  Undeland, a wonderful actress who developed Lady Randy as a member of the Berkshire Playwrights Lab Writer’s Group, originally intended the play to be a monologue for herself to perform.  Director Jim Frangione, founder and co-artistic director of the BPL, has worked with Undeland over several years, many readings, and numerous script revisions, to arrive at the play now being given a full production by WAM Theatre.

It was Frangione’s idea to introduce another actor who would bring to life twelve characters in Jerome’s story, including both males and females, young and old.  This tour-de-force performance by Mark Zeisler, using only slight costume changes, is nothing short of astonishing.  Much of the enjoyment of the play is the fun of watching Zeisler modifying his  voice and physical presence to embody each character.  Undeland portrays Jennie at various ages, throwing herself into the fray with energy and commitment.  With scarcely any breathing time to prepare for the introduction of Zeisler’s new personae, Undeland immediately adapts.

Frangione has assembled a team of talented designers, whose boundless creativity lifts this play from the page into every nook and cranny of Shakespeare & Company’s Bernstein Theatre.  Undeland characterizes her play as a “fever dream,” with transitions that should be “theatrical and otherworldly, with music, interesting lighting, billowy fabrics, and other stage magic.” How would the director and designers accomplish all this?  Set designer Juliana Von Haubrich has supplied a table that ingeniously morphs into a bed, adding two other, smaller tables that could easily be moved or lined up together.  Sometimes props are lowered from the ceiling for the use of the actors. Two onstage sliding screens help define each scene, and together with gauzy curtains lining the upper portion of three sides of the theatre create spaces for designer Lianne Arnold to project everything from a ship’s smokestacks, to Blenheim Palace, to Parliament, landscapes, maps, and even revolving stars.  Costume designer Brittany Belz provides hats, canes, and robes for Zeisler, using two onstage racks, and gorgeous gowns for Undeland, who is assisted in full view of the audience by a very effective female dresser/maidservant/set mover played by assistant stage manager Sadie Clouser.  Sound designer Tom Shread has chosen appropriate mood music (often classical or opera selections) as well as synchronized sound cues such as clocks ticking and crowds shouting.  Lighting Designer Lara Dubin fine tunes each scene with atmospheric lighting and also illuminates the steps of the aisles on either side of the center section, as Undeland’s Jennie occasionally races up and down them.

Frangione’s remarkable direction profits from his longtime collaboration with Undeland.  He welcomed the opportunity for the playwright/actress to be part of the rehearsal process, having developed a special shorthand to communicate their thoughts and ideas. The play’s intermissionless ninety minutes fly by, in spite of the onstage changes of character, set, and costume.  Deftly directing the comedic (often sexual) as well as the more dramatic scenes, Frangione is adept at using movement to tell the story (Kim Stauffer is listed as a Movement Consultant).

Lady Randy is a good fit for WAM Theatre’s mission to “focus on women theatre artists and/or stories of women and girls.”  Written by a local female playwright, this play sheds light upon an overlooked but intriguing Victorian woman, often in her own words.  Larger-than-life and ahead of her time, Jerome served as a sort of campaign manager for the careers of her husband and son, while openly engaging in affairs with counts and princes (including Edward, Prince of Wales, who became King Edward VII).  As always, WAM will donate a portion of its proceeds to organizations benefiting women and girls:  in this case Tapestry in Berkshire County and The MoonCatcher Project globally.

In celebration of their 10th Anniversary Season, WAM will offer ten $10 tickets at every single Mainstage performance during the 2019 season on a first-come, first-serve basis.