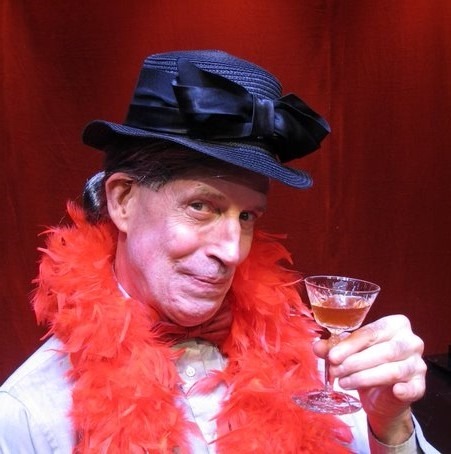 Bridge Street Theatre in Catskill, New York, has discovered a lovely way to re-emerge from the hiatus imposed upon the arts by Covid-19, selecting as their 2021 season theme: “American Roots—Re-awakened.”  And what is more American than THE WIZARD OF OZ?  Their first offering of the new season is a tour-de-force, 70 minute intermissionless performance by actor Steven Patterson (accompanied by the sublime Tom Judson on the piano), playing Almira Gulch—yes, the mean, bicycle-riding woman who intends to destroy Dorothy’s precious little pooch:  Toto—in an original musical called MISS GULCH RETURNS! by Fred Barton.

Patterson, playing both a male cabaret singer and Almira, asks why we would be interested in spending an evening with this unpleasant character.  Well, she’s “a part of our cultural heritage” and a “national symbol,” but most of all, if we don’t watch out, “she is what all of us are going to become.” Seeing the world through Miss Gulch’s eyes, as she faces constant disappointment in her search for love (what could someone who was “born on a bike in West Topeka on an afternoon in nineteen two” have expected?), Patterson reveals the human being underneath the symbol.

Almira’s journey, in song and story, lead us from her unhappy childhood, to her Hollywood failures (she claims they cut her big song in THE WIZARD OF OZ), to her career as a singer in a male piano bar, whose customers are only interested in each other.  But the lyrics are so clever and funny, employing outrageous rhyme schemes, referencing Broadway shows and all sorts of cultural associations, that it takes a master performer like Patterson to bring us from laughter one moment, to a recognition of our own painful insecurities in the next.

This is indeed why Barton wrote the play.  In a program note, he bemoans the disappearance of the mostly homosexual, “male pianist/singer performing witty songs and patter,” songwriting traditions made famous by the likes of Cole Porter and Noel Coward, that should never have gone out of style.  Not only was the playwright interested in reviving this tradition, but also in creating a metaphor “for the sexually and romantically alienated across all categories.”

Having written the book, music and lyrics for MISS GULCH RETURNS!, Barton performed the show in cities throughout the country, winning a Back Stage Bistro Award.  Patterson and his partner and co-producer John Sowle saw and admired his performance in Greenwich Village in 1985.  Barton’s musical talents are prodigious:  his symphonic arrangements are regularly played by the New York Pops at Carnegie Hall and major symphonies nationwide; among the many Broadway shows he has conducted are ZORBA, CABARET, CITY OF ANGELS, and CAMELOT; he was the original Arranger-Musical Director for FORBIDDEN BROADWAY and SPAMILTON, and has arranged music for and accompanied dozens of major stars.

Barton’s set is the cabaret stage where Almira/Patterson performs, beautifully designed and lit by John Sowle, who also directed this production.  Bright red curtains line the upstage wall and are pulled back at the sides to reveal Judson at the black baby grand piano stage right, in front of which is a chair and microphone.  Stage left is a small round table with cocktails, and two high chairs facing each other.  Slung over the back of the chair facing upstage is a woman’s skirt, on the chair is her black hat (costume designer Michelle Rogers constructs the perfect garments), underneath is a wicker picnic basket, and a bicycle is prominently displayed in the stage left corner.

After Patterson, dressed in a tuxedo jacket, white shirt and red bow tie, modestly and charmingly tries and fails to seduce the unresponsive, invisible Almira, he gives up, dons her clothing and becomes the woman herself.  This is not a female impersonation a la Dustin Hoffman in TOOTSIE or Robin Williams in MRS. DOUBTFIRE.  Through the use of gestures and movement, Patterson locates the feminine side of this character without overdoing or mocking his alter ego.  Raising his pitch a bit when speaking, the actor sings full-out in his own voice, putting over the songs with panache and style, never allowing those sparkling (and sometimes raunchy) lyrics to be lost or garbled. They range from quiet ballads delivered seated in a chair, to torch songs, to big production numbers, with Patterson pulling out all the stops, singing Louis Armstrong-type jazz riffs and luxuriating in gravelly-voiced vocalizations.  His transitions from speaking to singing are smooth and natural, almost conversational, and his obvious rapport with Judson adds to the fun.  Sowle directs the actor to use different areas of the stage for each number, varying his approach as he moves from spectacle to confession, from humor to vulnerability—always holding the audience in the palm of his hand.

Fortunately, Bridge Street Theatre will give us another opportunity to enjoy Miss Gulch in December, when Jean Tafler performs in her husband John Ahlin’s one-woman play:  My Witch:  The Margaret Hamilton Stories.

MISS GULCH RETURNS! runs from September 9—19, Thursdays, Fridays & Saturdays at 7:30 pm; Sundays at 2:00 at the Bridge Street Theatre, 44 West Bridge Street in the village of Catskill, NY.  For tickets call 518-943-3894 or visit gulch21.brownpapertickets.com

ALL ATTENDEES ARE REQUIRED TO PRESENT PROOF OF VACCINATION (OR A RECENT NEGATIVE COVID TEST), ID, AND REMAIN MASKED THROUGHOUT THE PERFORMANCE. Complete COVID rules HERE.