REVIEW: “A Chorus Line” at the Mac-Haydn Theatre 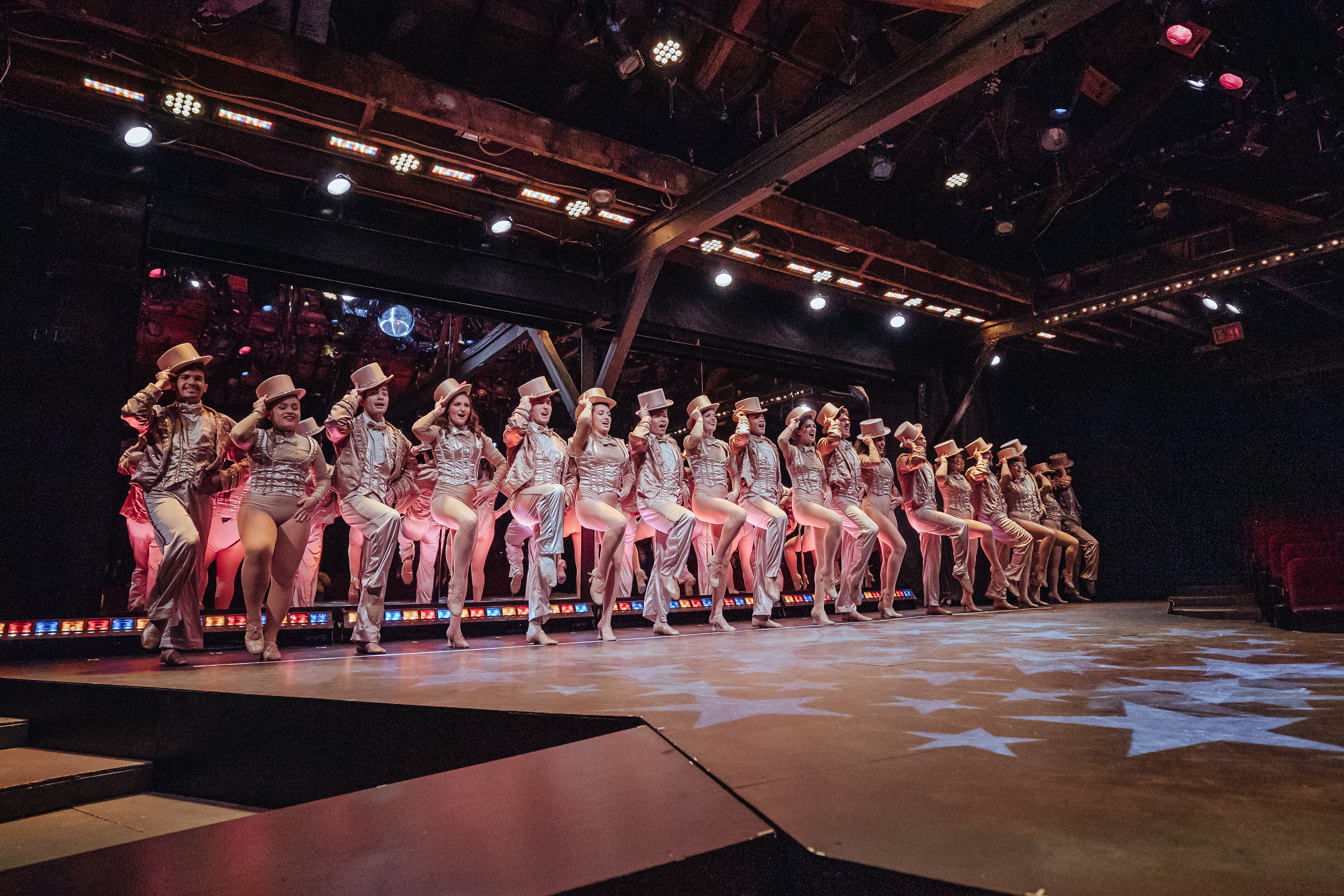 REVIEW: “A Chorus Line” at the Mac-Haydn Theatre

“A Chorus Line” definitely holds a soft spot in my heart. To this day, it remains the first, last, and only show I have ever actually seen in its native habitat on Broadway. In 1977, as a freshman in college, on a bus trip during Winter Term, returning to campus just as the Blizzard of ’77 decided to 5-6-7-8- kick, step, pivot, walk, walk, walk its way up,over, and across the East coast. Since then I’ve called cues for more than one performance of the always-show-stopping finale of “One”, as well as having stage-managed a full-scale production, where my claim to fame may be the 22 second full costume change of Mac-Haydn alum Darren French, who had the admirable task of leading the entire company into the top-hatted, gold-spangled costume, high-kicking finale.

But I digress. The Mac-Haydn has chosen “A Chorus Line” to open its 2022 season, and it is a nothing less than a glorious addition to the many fine productions of this seminal, ground-breaking and enduring musical love letter to, and by, the dancers known as the gypsies of the the musical theater world. Opening on Broadway in 1975 and running until 1990, and winning 9 Tony awards out of 12 nominations along the way, A Chorus Line held the record for longest running production in Broadway history, until “surpawsed” by “Cats” in 1997. Under the direction of Eddie Gutierrez, in his directorial debut at the Mac, the cast shines as brightly as the traditional golden finale costumes.

The majority of the cast are newcomers to the Mac-Haydn stage this season, which makes A Chorus Line the perfect vehicle for their debuts, as they strut their stuff and one by one bare their souls under the unforgiving spotlights. This is a cast clearly brimming with a love of theater, hope, joy, passion for dance, and not just a little nervousness. And that is just as it should be. While their collective vocals may not be their strongest talent, there is no mistaking the sincerity and commitment with which they deliver their performances. As a corps, they bring a palpable enthusiasm and dedication to their roles. That vocal veracity lends a lovely touch of realism to this season opener, as clearly Art has imitated Life, showcasing these new, and justifiably proud, members of this year’s company who survived the arduous audition process and made the final cut.

The cast truly shines in the ensemble numbers, particularly the “practice” number “One” which begins to set the stage for the reprise that ends the show. This is possibly the best demonstration of the stunning choreography on display through the production. The progression from sloppy, hesitant missteps to a coalesced dance number is beautifully performed, and visually arresting.

Cast in a rare non-vocal role, Gabe Belyeu turns in a finely-nuanced performance as Zach, the director who needs to cull “ 4 and 4”—4 girls,4 boys—from the eager cattle-call crowd of hoofers gathered for auditions. As the disembodied voice coming from a darkened house, he puts the dancers through their emotional paces with as much iron-hand in velvet glove finesse as he demands from their dance steps. Rather than deciding their fates solely on the basis of their terpsichorean abilities, Zach begins the process of extracting from each dancer the story of the journeys that have brought them to the day’s auditions. One by one, they step forward into their own moment,,literally in the spotlight, and guided by Zach’s probing questions and razor-sharp comments, begin to lay bare their lives. Belyeu is a master of layered characterization, imbuing Zach with equal measures of compassion and disdain, impatience and tolerance, understanding and skepticism as he extracts their their stories. His scenes with Cassie, ex-lover and once-star-turn dancer now desperately just seeking a job, any job, that will let her dance, are intensely personal and reveal another layer of the character—the driven director, determined to go from good to better to best, at the expense of personal relationship.

Some of the beauty of A Chorus Line lies in “celebrating” the faceless, nameless anonymity of the “gypsies” who travel on through the Broadway world, the dancers looking for that next, or that first, or perhaps even the last, place in a chorus line of a show, any show that will have them. The anonymity initially on display as the auditions begin will eventually reemerge in the grand finale, where the dancers appear almost as a single centipede-like unit, their previous reveals now forgotten or at least tucked away until the next audition calls them out. Yet, as the opening number concludes with the iconic presentation of head shots of each character desperately praying “I hope I get it”, it begins to become clear that there is a name, and a face, and a life, and a story,for each pair of feet hopefully working the combinations called out by exacting director Zach.

While the choreography definitely takes center stage for much of the production, the stories extracted from each of the featured characters offer their own potential moments to shine, and there are several in this production deserving of particular notice. Isabella Vargas, as Diana, may be the break-out star of the season. In her Mac-Haydn debut, she moves effortlessly from feisty to reflective, with a strong, true voice bringing more than “Nothing” to her defiant, determined, funny and ultimately regretful description of her days in Mr. Carp’s acting class. She delivers “ What I did for Love,” the show’s iconic and signature anthem to the life of a gypsy dancer with a beautiful poignancy that will resonate with anyone who has ever wondered or worried if they will regret the life they have chosen, or the dreams they have followed,wherever that may have taken them, Perhaps we should all heed the call to not forget and not regret what we all do for love…..

Returning veteran of the Mac stage, Kylan Ross adds a welcome touch of experience as Al, the protective husband and voice of his tone-deaf, but shower-power worthy, wife Kristina, The number “Sing” can be especially difficult to carry off, both in terms of timing and pitch, but both Ross and Julia Hajjar manage it with great aplomb.

Anthony Velez, returning after last year’s triumphant Sancho in Man of LaMancha, and the hapless but ultimately fulfilled Arpad in She Loves Me, gives the audience a moving, heartfelt and crowd-hushing moment with Paul’s lengthy soliloquy of his journey to this moment and this audition.

As Cassie,Holly Lauren Dayton does full justice to both her character and to her character’s signature number “The Music and the Mirror”, with on-point choreography performed to perfection. This has never been a favorite number of mine; to me it’s akin to what I consider the gratuitous ballet sequence in Oklahoma, but under Guitierrez’s direction, and with Dayton’s flawless execution, it becomes what it should be…a dancer’s journey. Dayton literally moves from a sense of desperation at her current situation, to finding and reclaiming the joy of the dance where she first knew “I’m a dance. A dancer dances.” Only slightly marred by what might be considered an unfortunate lighting choice of orange hues, Dayton and her movements reflected in the wall-to-wall mirror held the audience until the last note died away and the last step stilled.

Lighting by Mac-Haydn veteran Andrew Gmoser is, for the most part, spot on, pun most certainly intended. Featuring primarily stark,white, bright theater lighting, with the occasional injection of color at pivotal moments, the star of the lighting is the spotlights which highlight each character as they take their turn, literally, in those spotlights. Overall, Gmoser creates the perfect atmosphere of a theater in use for auditions. One caveat to be mentioned is the superfluous use of strobe lighting interjected at seemingly random moments. Simply because the technology is available doesn’t necessarily justify its use. A similar comment on the Mac’s apparent love for the use of a hazing effect. This a show about auditions for a Broadway show; it is not necessary to create the atmosphere of a road company production of Brigadoon.

Kevin Gleason’s scenic design is virtually already in place for him. With dancer’s bags scattered haphazardly across the floor, a white toe line, and a black backdrop which rises periodically to reveal a wall-length mirror, the Mac stage is the classic representation of a theatre literally set for the auditions, and revelations, about to take place within its walls. You can almost hear whispers and echoes of auditions past rising from the wooden boards as feet dance across the boards.

This is the perfect show to open the summer season. At times joyous, heartbreaking, defiant, funny, insightful, ironic, and poignant, A Chorus Line at Mac-Haydn touches the heart of anyone who has ever pursued a life’s dream, on or off a stage.

“A Chorus Line” runs 2 hours and 30 minutes, including intermission. COVID protocols are in place. Proof of vaccination is required, and masks are required inside the theatre for all audience members.