REVIEW: “Kiss Me, Kate” at the Mac-Haydn 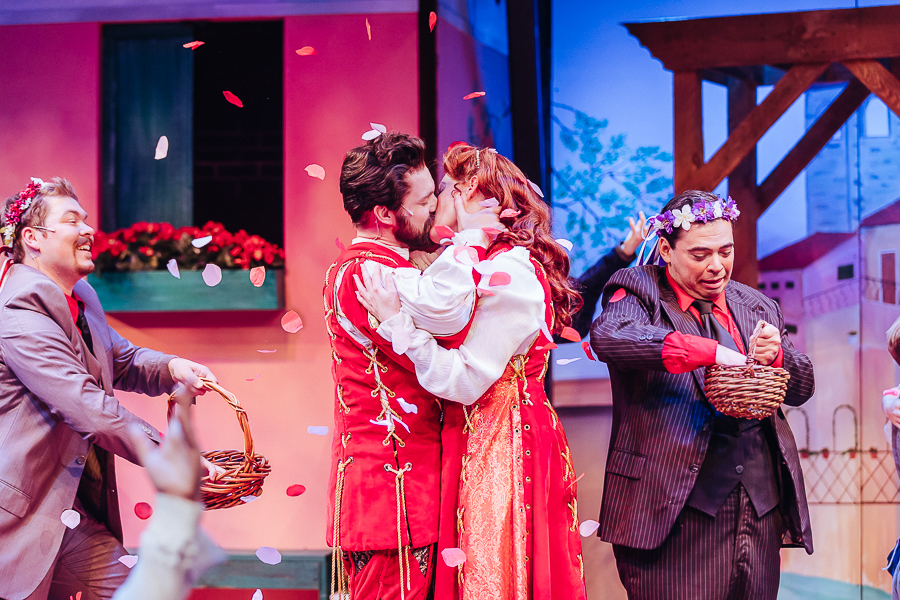 REVIEW: “Kiss Me, Kate” at the Mac-Haydn

[EDITOR’S NOTE: Due to a combination of a recent illness and the extreme heat on the date he attended, Mr. Levin was only able to see the first act. His many years in the theatre and familiarity with this classic work enable him to write knowledgeably about it, and to share with you his impressions of this particular production.]

Cole Porter has written a plethora of songs to be found in America’s Songbook.  He is also one of the premier composer/lyricists for several Broadway shows including Anything Goes, Can-Can, Silk Stockings and his most celebrated Kiss Me, Kate, which won the first Tony for a musical in 1949.    It boasts such standards as “Why Can’t you Behave” “Wunderbar” “So in Love” “Too Darn Hot” and many more.  This classic show is currently at the MacHaydn Theatre in Chatham, New York.

Lilli Vanessi (Meredith Lustig) is returning to the stage after an unsuccessful movie career; her ex-husband Fred Graham (Michael Axtell) is directing and playing opposite her in Shakespeare’s The Taming of the Shrew, much of which is incorporated into the show. Their antagonism pervades their relationship offstage and on as they both pursue others.  Add the sub-plot concerning the two secondary leads in Shrew, and the comic leads of …Kate – Lois Lane (Lucy Rhoades) and Bill Calhoun (Harrison Asher Smith) – and the turmoil grows into comic misunderstandings and near catastrophe until all is right by play’s end.  A common element for both couples is that they still love each other.

To complicate matters, Bill, who is an inveterate gambler, has signed Fred’s name on an IOU for ten thousand dollars.  Fred is visited by two goons demanding payment.  This touchy situation produces a number of laughs as the two gangsters become involved in the production.

The show as directed by Erin Spears Ledford is big and broad, though it lacks Porter’s sophisticated style.  This does not minimize its entertainment value.  Her staging, especially on MacHaydn’s small acting space, is more than exuberant thanks to the energetic cast.  The songs are pleasantly sung and the choreography by Bryan Knowlton is brisk and rollicking.

Lustig as Lilli has a beautiful voice which serves her and the production well especially for “So in Love.”  Her acting is both expressive and subtle lending varying levels to her character.  Fred Graham has been played by Alfred Drake, Howard Keel, and Brian Stokes Mitchell.  Though Axtell does not have the physical stature of his predecessors, his work, including his voice, satisfy the various qualities of the character and enhances the show’s performance.

Rhoades and Smith add immeasurably with their voices, comic timing and dancing as seen in “Why Can’t You Behave.”

The various sets designed by Erin Kiernan are brilliant, especially the one for Shrew.  The transformation from the backstage scenes to the set for Shrew, given the amount of set pieces that have to be removed and setting up the new set, takes only seconds maintaining the momentum.  Andrew Gmoser’s lighting complements the spirit of the show.  The seven-piece orchestra led by Emily Croome brings life to the myriad musical numbers.

The second act, which I unfortunately could not see, features several wonderful songs including “Always True To You in My Fashion” and the wonderfully comic “Brush Up Your Shakespeare.”

MacHaydn does terrific work and this is a terrific show, especially to introduce younger audiences to a true American classic.