REVIEW: “Xanadu” at the Mac-Haydn Theatre 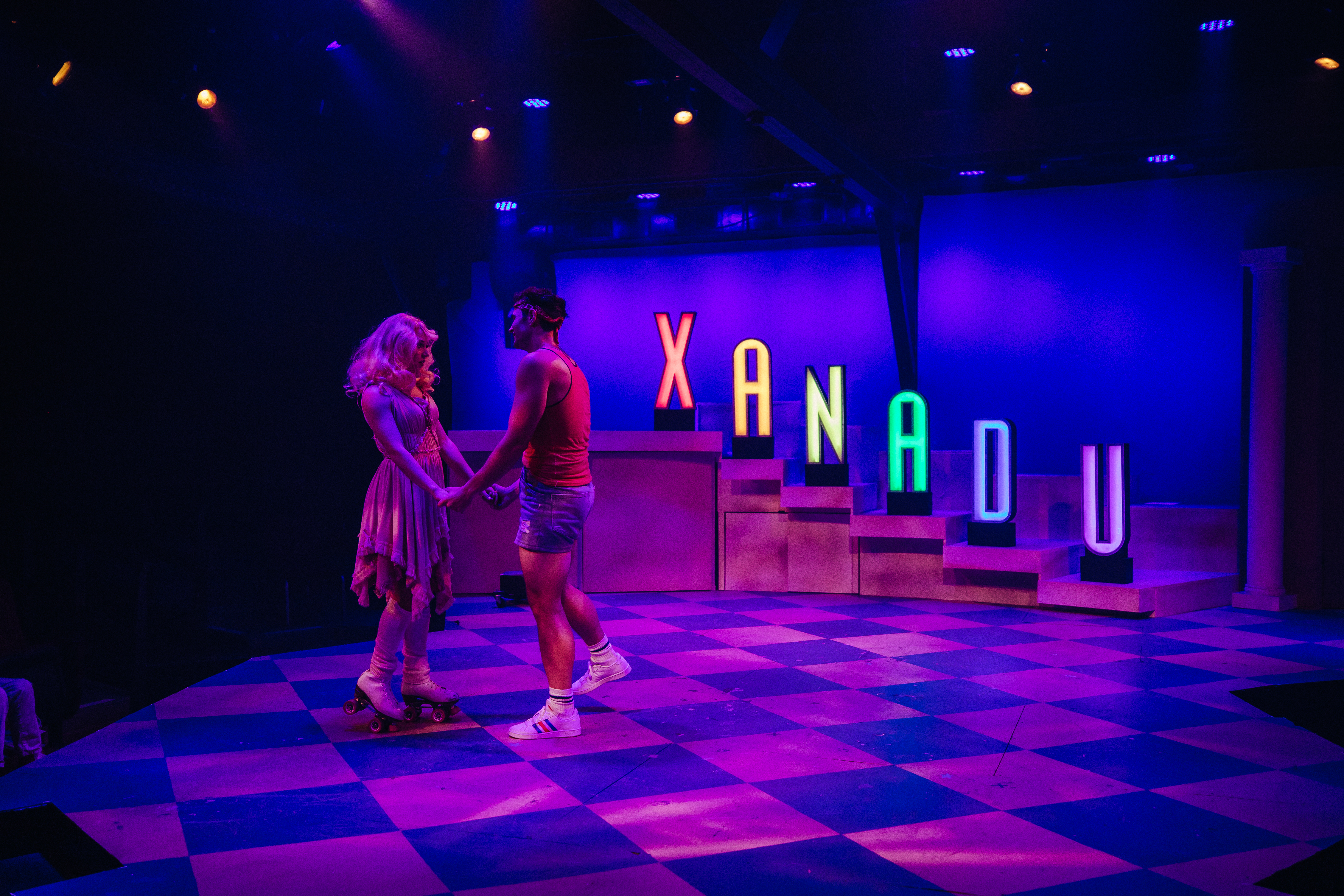 REVIEW: “Xanadu” at the Mac-Haydn Theatre

Picture a musical consisting of seven of the nine Greek Muses, daughters of Zeus (supposedly the other two are in the band), two of whom are males, whose leader (Clio, the Muse of History) wears roller skates, changes her name, and speaks with a bizarre Australian accent to disguise her identity in 1980 L.A. With its ridiculous plot, outrageous costumes, and high octane, over-the-top, self-mocking performers, Xanadu is just what the doctor ordered in this time of pandemics, wars, and terrorism.

The play is based on a film that was universally panned.  Christopher Isherwood, in his 2007 review of the Broadway production, asks:  “Why, you may wonder, would anyone deem it necessary, or even worthwhile, to pay lavish mock homage to a dreadful movie by exhuming it for exhibition onstage?” To which Zeus, ruler of the Gods, replies, in one of the funniest lines in the musical:  “Creativity shall remain stymied for decades.  The theatre?  They’ll just take some stinkeroo movie or some songwriter’s catalog, throw it on a stage and call it a show.”

No one can mock Xanadu more cleverly or with more wit than its own book writer, Douglas Carter Beane, who won the Drama Desk Award for Outstanding Book of a Musical and was nominated for a Tony Award for Best Book of a Musical for this show, which also won an Outer Critics’ Circle Award and Tony nomination for Best Musical.  Beane won many other nominations and awards for his plays and musicals, including As Bees in Honey Drown, The Little Dog Laughed, Lysistrata Jones, and Sister Act.

Xanadu is a love story between a muse, Clio (Lucy Rhoades) and an L.A. artist, Sonny (Andrew Burton Kelley), badly in need of inspiration.  Once Clio and her sisters jump out of the mural Sonny has painted of them (he “did a ton of research.  I took a book out of the library and everything”), Clio disguises herself as Kira and dedicates herself to helping Sonny achieve his artistic goal:  creating the world’s first roller disco.  Unfortunately, in doing so she commits two crimes that offend Zeus:  she falls in love with a mortal, and she takes an active role in the creation of his dream.  What sort of punishment does Zeus have in store for her? Kira also faces obstacles in the form of two muses who, out of jealousy, curse her by making her fall in love with Sonny, and they bribe Danny Maguire (Tezz Yancey), a landlord, to tear down his unused club (Xanadu) and build condos instead of allowing Sonny to use the space for his roller disco. Will Sonny and Kira ever reach Xanadu? (both the name of the Emperor Kublai Kahn’s pleasure palace as described in the poem by Samuel Taylor Coleridge, and an honor sought by the muses:  a “gift so grand that none of us truly knows what it is”).

What fun it is to be able to avoid judging this crazy, contrived plot, knowing that the writer, director, designers and cast are all as aware as we are of its inanity and actually celebrate it!  Director Robin Campbell and her cast must have had a wonderful time rehearsing this production.  Campbell seems to have been a muse to these performers, encouraging them to make all sorts of wild, comic choices in their characterizations.  And choreographer David Tankersley blends 1980s dances with goofball gestures and poses that are funny and surprising, in addition to choreographing a Rockettes-style dance with actors on roller skates. Tankersley is also involved with props (with Emily Allen), among which are Pegasus, the immortal white-winged horse in Greek mythology, who flies Kira to Mount Olympus; a centaur (the head of a man and body of a horse); huge feathered fans for a dance with the daughters of Melpomene; a large phone booth; Medusa with her snakes, and on and on. . .  Bravo to Angela Carstensen, Costume Designer, and Andrew Gmoser, Lighting Designer, for their incredible creations and effects and to Music Director Bobby McCoy and his wonderful band, who keep the pop music going.

Though every cast member goes all out for this show, special mention should be given to the following performers:  Julie Galorenzo, a terrific singer and comedienne, who plays Melpomene, Muse of Tragedy—one of the two evil women who place that curse on Kira; Andrew Burton Kelley as Sonny:  a tall, handsome hunk wearing short shorts, not very bright (he thinks Mt. Olympus is “The Clash of the Titans” and the gods and goddesses are actors “slumming for bucks”) with a powerful voice and the ability to move well in sneakers as well as roller skates;  Clio/Kira, played by Lucy Rhoades, blond and bouncy with a lovely voice and a looney Australian accent; Terpsicore, one of the two male muses, a fabulous dancer/singer—a real Broadway gypsy with comic talent as well; and Calliope/Aphrodite played by Rachel Pantazis, evil partner of Melpomene, whose gestures and accents are priceless.  Tazz Yancey makes up for what he lacks in vocal skills by tap dancing with both verve and energy.

If you find yourself in need of a pick-me-up go see Xanadu at the Mac-Haydn and you’re guaranteed to feel better.

XANADU runs in tandem with FOREVER PLAID from September 9—October 2 at the Mac-Haydn Theatre.  Tickets may be purchased by calling 518-392-9292 or online at www.machaydntheatre.org.