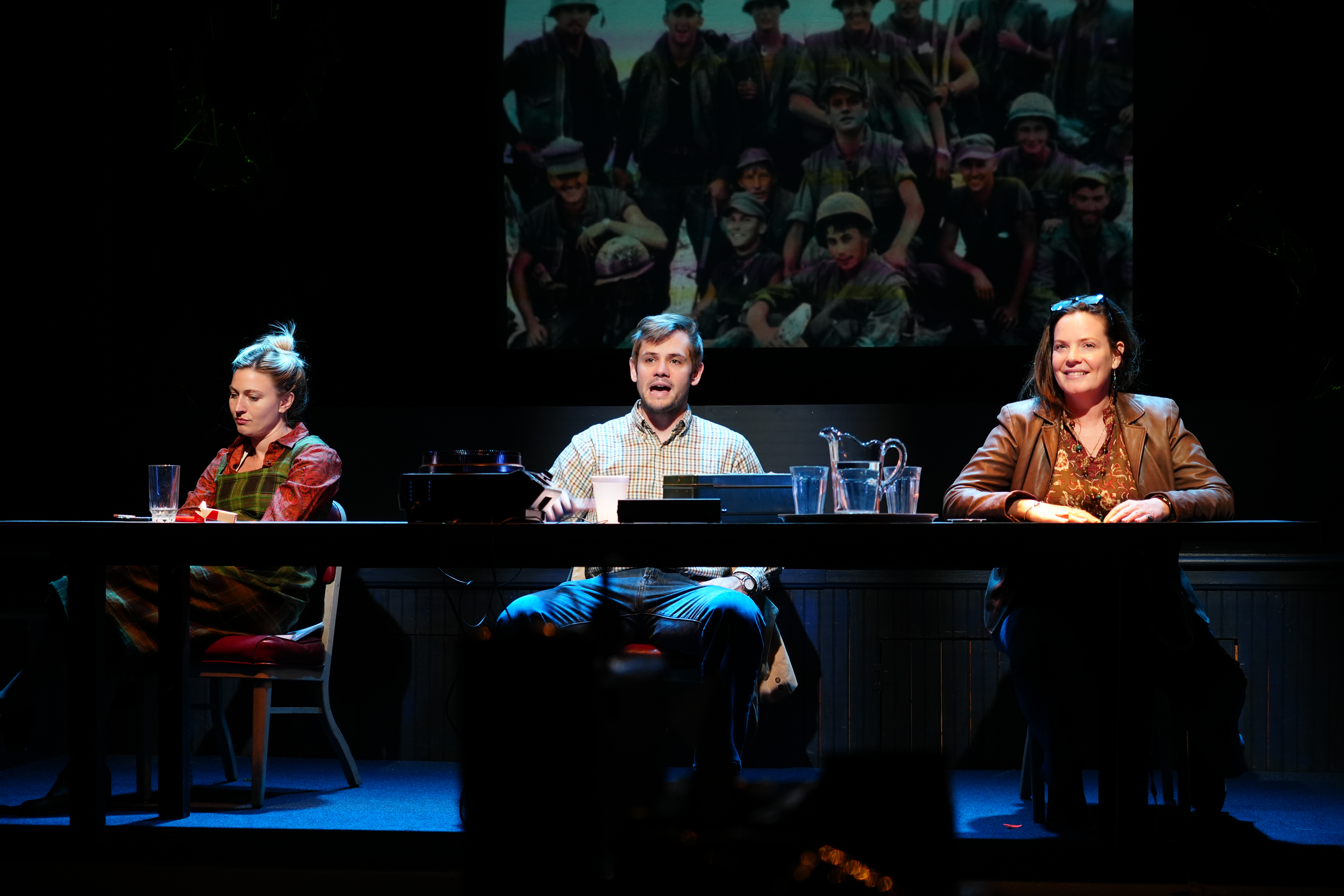 STILL LIFE, by Emily Mann, opened September 30th at the Ancram Opera House. A collaboration with Playhouse Creatures Theatre Company, this drama is an emotional and gut-wrenching play. Audience members are advised in advance with this content warning: “Please be advised that the content in this performance may be upsetting for some audience members. STILL LIFE contains depiction of war and references mental illness and domestic violence.” The warning is appropriate and significant.

Mann’s play is described as “a documentary play about the immediate aftermath of the Vietnam conflict.” The playwright based her story on interviews and merges the amalgamated stories into the fictional drama of Mark (a former Marine), his wife Cheryl, and his mistress Nadine. This is dense and disturbing material and is told in the most direct, simple way.

The set design by Sara Edkins consists a long black table and three utilitarian chairs. Are we at a trial, a tribunal, a lecture? We don’t know. Behind the characters at the table is a black picture frame and a secondary projection screen behind that. Suspended between the frame and screen are shards of “glass”—a visual metaphor for the broken lives of these three people. Ayumu “Poe” Saegusa created the beautiful and effectively layered lighting design. Backed by the stark and disturbing images of war in the projections by Takaaki Ando, the world we are in is that of a shattered American Dream.

Although the characters relate to each other a few times, most often they are talking directly to us. They reveal their imperfect lives and admit to guilt and regret. The major dramatic question is, given the horrors of sending a young Marine into the hell of war, what was the event that broke Mark into pieces? What cannot be forgiven or healed?

For those of us who were young in the 1970s, this is a play that may bring back bitter memories and anger and also a script that resonates today. So, it is a terrific emotional challenge for both the audience and the actors. Under the capable direction of Jade King Carroll, the tightly-knit ensemble confronts the pain of the three characters head on.

Juilliard graduate Piper Patterson plays Cheryl, Mark’s wife. Her performance is spot-on, effectively capturing the surreal stasis of a damaged young wife and mother, pregnant with a second child, and trapped in a hellish marriage of abuse and neglect. Patterson finds nuance and depth to what could be a one-note character.

Nadine, Mark’s mistress, is nothing like Cheryl—she is a divorcee in her early 40’s who romanticizes her relationship with Mark, unable to see who he really is. As portrayed by Danielle Skraastad, she is an intriguing character but played with little variation in physical or emotional arc.

The most demanding role is that of Mark. Doug Harris turns in a super intense and emotional performance of the ticking timebomb of a man relentlessly haunted by his personal demons. As he relates his evolution from idealistic young American hero to post-war vet, drug dealer, and wife abuser, he reveals a nervous, edgy and dangerous young man whose life has been decimated by the horrors of war. Harris’s portrayal is at times too fraught and it lacks an arc—he is on the ledge about to jump from the get go and just stays there. But he definitely captures the dark depths of his charater.

STILL LIFE is most effective and realizing the author’s intent to show the price we pay for the violence of war. It is an imperfect piece, however. It is essentially static – there is no emotional arc or insights that can free these three people from their personal traumas. While they acknowledge their missteps in life, Mark and Cheryl cannot see a way forward. They are condemned to go on with no hope for a better future without pain and estrangement. Nadine is a survivor and you feel she might transcend the present situation, but it is unclear how.

All in all, this is gripping theatre that attempts to convey a painful time in American history. Yet it presents a bleak and unclear scenario with no insights into how we can stop the violence or redeem this dark past. (The play has moments that are reminiscent of Sartre’s NO EXIT or Beckett’s WAITING FOR GODOT). In an interview, Mann declared that “I have no answer to the questions I raise in the play, but I think the questions are worth asking.” Still, we cannot help coming away wishing some answers had been offered, and some hope for moving past our violent and painful history.

Covid policies are on the website at this link: https://www.ancramoperahouse.org/covid-guidelines.