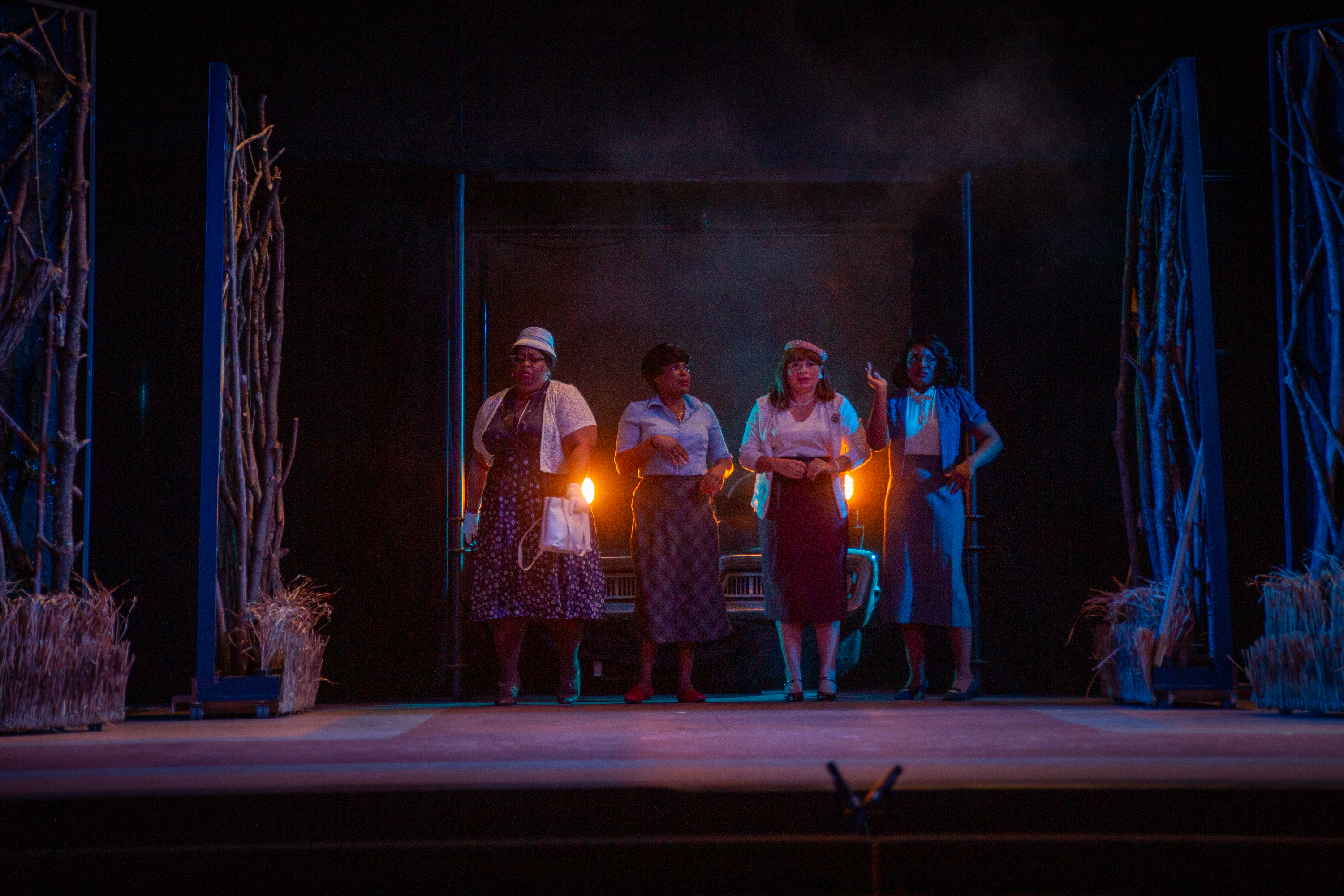 The WAM Theatre is a remarkable company in the Berkshires and in the country. With a devout mission to create “a place of groundbreaking theatrical stories, female empowerment, and transformative action,” the theater does just that. The company’s newest work, CADILLAC CREW, now playing at Shakespeare & Company, meets that challenge head on.

In this remarkable play by playwright Tori Sampson, we are asked to consider “what happens when Black women refuse to be written out of history?” We are introduced to four young women in Virginia in 1963 in a dilapidated basement office where they are working for the Civil Rights Movement. Outside we hear the voices of protest and within this office we hear the impassioned arguments of the women, who are ready to make change in their world. The play will examine the issues and difficulties (both personal and philosophical) that these women faced then and now. The leader of the group, Rachel, has been inspired by the “Cadillac Crews” – teams of two Black and two White women driving Cadillac cars to places throughout the deep South to meet in small groups and to educate women about what they can do to fight segregation and racism. What is amazing is that this actually happened and it seems to be a postscript in history that was, until now, forgotten. When Rachel’s plan to have Rosa Parks speak for a conference is subverted by the male leaders, her anger propels her into action, taking her colleagues along with her.

The second section of the play tells the story of the women through their journals, written while on the road as a Cadillac Crew. Here we learn more about their personal lives and choices and a backstory of Rachel and Sarah that explains what drives them together and apart.

Just when we are engrossed and fully emotionally connected to the four characters, the play shifts in time and tone to the present day and the Black Lives Matter Movement. In a radio podcast, a journalist (also called Sarah) interviews Alicia Garza, Patrisse Cullors, and Opal Tometi—three radical Black activists who created “a Black-centered political will and movement building project…in response to the acquittal of Trayvon Martin’s murderer, George Zimmerman.”  The interviewer invites each woman to explain the story of how that movement started and what it means today.

The play then shifts again into a somewhat surreal section that teeters on the edge of proselytizing, even as it steers us to imagine a better, more hopeful future. Sampson’s story is an important one to tell and it is sure to motivate the spectator to delve more deeply into history and to examine one’s commitment to confronting and putting a stop to racism and demonization of others. She asks the big questions and spurs us to be active and accountable for the world we live in.

The cast of four are both individually strong and engaging in their passionate characters—each one described in the script as “a powerhouse of a young woman.” Together they are a formidable ensemble that work together like a well-oiled machine—possibly the best we will see in area theatres this year. The leader of the group is Abby, a proud and dedicated Black woman portrayed with ardor and total commitment by Cate Alston. Her energy and fire never diminish and it is Abby’s voice that stretches across time in this story to challenge us today. Kyra Davis brings elegance and great humor to the role of Rachel, a 22-year-old Black woman driven to make her mark in the world. The indomitable McConnia Chesser plays Dee, a Black, 35-year-old mother who reluctantly joins the Cadillac Crew. Chesser is remarkably funny and manages to carefully delineate the complicated character who aims to be an inspiration for her young daughter. Alston, Davis, and Chesser double in the roles of the Black Lives Matter activists later in the play. Alicia M.P. Nelson effectively plays Sarah, the sole White woman of the group. Nelson affectively captures both the confidence in herself and the deep faith in her cause.

Director taneisha duggan stages CADILLAC CREW with a sure hand, especially in her direction of the realistic scenes. When passions run high, the quartet of actors are in danger of shouting too much, but the energy and dynamic relationships are highly effective and emotionally moving. Duggan uses the space well and creates a believable world in the office scenes and on the road. She nicely solves the staging of some potentially difficult scenes—especially with a most convincing, steaming Cadillac that is broken down on the country road. Once the play moves out of its realistic framework, however, the staging is confusing. As the text veers into an imagined future, the final speeches are presented in a disjointed manner, interspersed with dance and lighting which does not clearly bring closure or understanding of the message of the play is. The text is compelling, but the staging seems more improvised than clearly visualized.

CADILLAC CREW demands a lot of its cast and creative team. Fortunately, duggan’s capable direction is supported by interesting set and lighting designs, masterful costuming, and solid sound design. Juliana von Haubrich’s scenic design is inventive and serves the play at every turn. Samuel J. Biondelillo, created the effective lighting and projection design. A sound design and music by YM further enhances the production. (And a shout out to the excellent timing on the tricky sound cues of crowd noises jumping in and out of the first scene). Calypso Michelet’s costumes are excellent, providing a clear sense of period and personality for the four distinctively different women. Ericka N. Hanger’s hair and makeup design is equally effective, especially in the contemporary interview scene where the actors appear as real people.

We must recognize the other efforts of this company to educate and entertain. There are informative lobby displays, brochures on African American Heritage, and study guides available. Moreover, the theatre is offering childcare for children 5 to 12 at the theatre for the October 23rd matinee performance plus home babysitting care subsidies for any of the performances. Additionally, there is an array of community engagement activities related to the play.

WAM Theatre is to be highly commended for staging this important story—it is history that needs to be shared. The two hours in the theatre teaches us and entertains us—provoking laughter, anger, and audience interaction. Theatre is a means to challenge us through stories and emotional dramatization and CADILLAC CREW does this remarkably well. This writer hopes this play will draw a large audience and recognition and support for its mission.