A remarkably relevant “Camping With Henry and Tom” at Barrington Stage 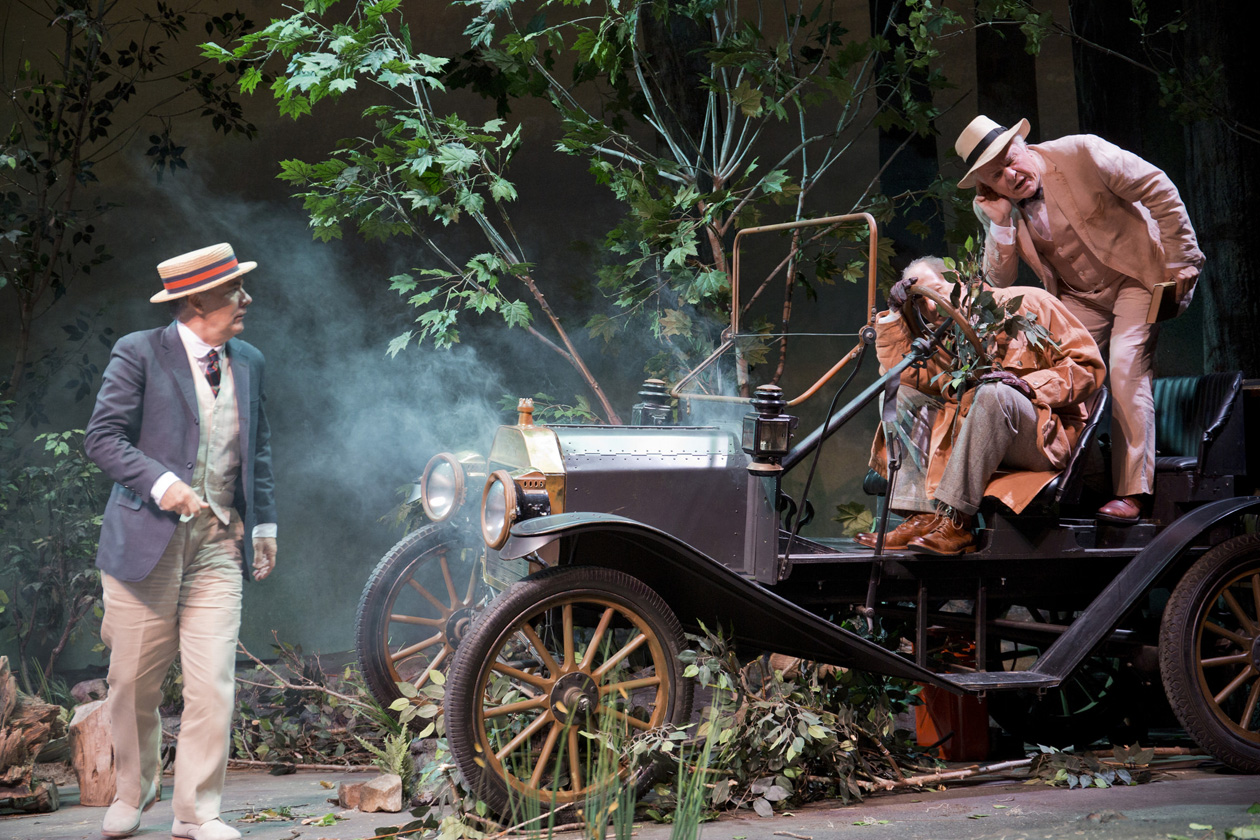 A remarkably relevant “Camping With Henry and Tom” at Barrington Stage

Camping with Henry and Tom
Theatre Review by Macey Levin

At the opening night of Mark St. Germain’s play Camping with Henry and Tom, Julianne Boyd, artistic director of Barrington Stage Company, declared for this season’s finale that she and her staff didn’t realize the relevance of the play when it was originally selected. Though first produced at the Berkshire Theatre Festival in 1993 when Ms. Boyd was artistic director there, the play could have been written last night with lines from the past week’s newscasts.

Some of the issues, personalities and catch-phrases that have been involved in the current presidential election are in this flawed but intriguing play. The characters – Thomas Alva Edison, Henry Ford and President Warren G. Harding – argue over corruption in government, the need for an outsider to be elected, sexual escapades of elected officials, immigration (Ford has an extensive speech in which he says, “First get rid of the Jews,) and “Let’s make America great again,” amongst other comments.

The premise of the play is partially based on an actual incident. Ford and Edison used to go camping together; St. Germain fictionalized their last trip, in 1921, by including Harding. They decide to leave the fictional campsite where their aides and the press have surrounded them to seek a quiet time. Ford, driving a Model T, veers to miss a deer on a mountainous road, disabling his car by running into a tree. Their first and continuing argument is what to do about the injured deer. Their attitude and decisions toward it mirror the development of the conflicts. While they wait to be rescued their various aspirations and personalities are revealed.

Ford’s idea to “escape” was to bargain with Harding about acquiring the Muscle Shoals, Alabama development project with its potential electricity-producing energy for a dirt cheap price. As leverage, he uses Harding’s relationship with his mistress, Nan Britton, with whom he had a child. Ford lacerates Harding and his weakness as president by declaring that he is the only one who can bring America to its rightful pace in the world.

Harding, for his part, reveals that he hates the position and the responsibility he that goes with it. He says he accepted the nomination as a favor to his political friends never believing he could win. He yearns for the day when he will return to his home in Blooming Grove, Ohio, with or, preferably, without his wife.

Edison’s function in the play is that of a sometimes mediator. St. Germain employs him to throw out humorous one-liners, that aren’t always humorous, with an occasional observation of folksy wisdom.

After a relatively slow expository sequence the play gathers energy as the protagonists commiserate with or challenge each other. The three of them have strong personalities tempered by their egos and frustrations. The conversations are fictional but have been interpreted by the nature of the era and the men’s documented writings.

Henry Ford is a man you love to hate. His haughtiness and arrogance are the dominant elements of his character and Patrick Husted gives him every inch of that. His physical carriage and force of personality surge through everything the manufacturing tycoon says and does. You know he is not a man to antagonize!

Kevin O’Rourke’s Warren G. Harding invokes our empathy as we hear his anguish while discussing his reluctance to be the leader of an emerging world power. There is a gentleness that exudes from him when he talks about he much he treasured his past life as a senator and his home in Ohio. Yet, there are moments when he uses the power of his office to make demands of the secret service agent (Fisher Neal) who comes to rescue them.

Thomas Alva Edison was very much like the character in the play – a cracker-barrel cynic. He didn’t suffer fools but did not enter into the fray. PJ Benjamin is very likable as Edison and is a comforting contrast to his companions. Occasionally he is difficult to hear but he is a hovering presence on the stage.

David M. Barber’s set of a small glade in a forest is atmospheric. The trees and rocks surrounding the area form a makeshift arena for the Ford and Harding confrontations. Scott Pinkney’s lighting, especially the sunset, is evocative and contributes to the development of the conflict as the night deepens. The costumes by Charlotte Palmer-Lane help to place the play in its historical context.

Director Christopher Innvar keeps the play moving at a sharp pace after that slowly-scripted expository scene. There are times when he has his actors come to the apron of the stage where they tend to take a declamatory pose though the intention may be that they are looking at the forest surrounding them. Conversely, there are moments when the actors are speaking upstage. On the whole, he makes the play work. The audience was rapt with occasional gasps as they recognized that what was being spoken in 1921 has been recycled in the 2016 campaign.

This is one of St. Germain’s earlier plays but it speaks to us regardless of the era.

Camping with Tom and Henry runs through October 23 at Barrington Stage’s Boyd-Quinson Mainstage on Union St. In Pittsfield, MA.