Art, faith and forgery at the heart of WAM Theatre’s “Bakelite Masterpiece” 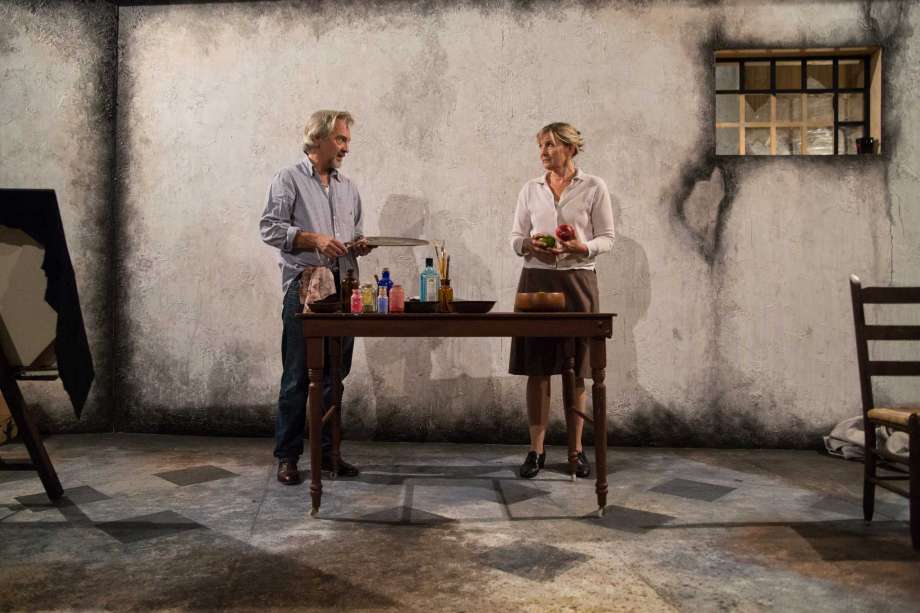 Art, faith and forgery at the heart of WAM Theatre’s “Bakelite Masterpiece”

Under what circumstances would a convicted art forger gain his freedom by forging another masterpiece? The current production of The Bakelite Masterpiece by Kate Cayley, jointly produced by WAM Theatre and Berkshire Theatre Group at the Unicorn Theatre in Stockbridge, Massachusetts, explores an historical incident in the Netherlands during the late stages of World War Two.

Han van Meegeren (David Adkins) has been sentenced to be executed for having sold an original painting by Dutch Master Johannes Vermeer to Nazi leader Hermann Goering. His defense is that the painting was his forgery. The prosecutor Geert Piller, (Corinna May) an art historian and resistance fighter, conducts one last interview demanding Meegeren sign a prepared confession. He refuses citing the fact that the painting was not the original. To prove his facility at forgery he requests that he be allowed to demonstrate his ability to recreate another Vermeer. Out of curiosity, Piller agrees.

He tells her he will reproduce Christ and the Woman Taken in Adultery, the “long-lost” painting he sold to Goering, if she will pose for him in a blue dress. Reluctantly, she agrees. Instead he paints an interpretation of Vermeer’s Woman in a Blue Dress. Both are attempting to define their respective version of the truth; he to demonstrate the validity of his claim; she to reinforce the case against him. As van Meergeren starts to paint he and his watchdog develop a relationship of mutual respect. After feinting and parrying through several conversations each becomes concerned for the other.

Adkins and May, married in real life, bring an honesty to the evolving relationship, which isn’t romantic but rather an understanding and appreciation for the other. He sometimes borders on the melodramatic but quickly moves into a defensive intensity as he battles for his life. In her first scenes May is all business. She demands he sign the trumped-up confession, but she slowly softens, with some restraint, as she becomes directly involved in his attempt to prove his innocence.

Cayley’s dialogue is replete with philosophical comments regarding art, responsibility for one’s actions, and faith. The arguments sometimes border on didacticism undermining the pace of the play. This is more a problem of the script than the direction by WAM artistic director Kristen van Ginhoven which is otherwise sharp and fluid. Though working with only two actors, she creates fascinating stage pictures, especially with the creative lighting design by Lily Fossner. Juliana Von Haubrich’s set is fittingly grimy and spare placing the focus on the artist’s easel and paints.

The play offers conflicting concepts as it unfolds on its way to the resolution between the two enigmatic characters. It is a work that allows you to muse about life’s obstacles and opportunities.