REVIEW: “Anything Goes” at the Sharon Playhouse 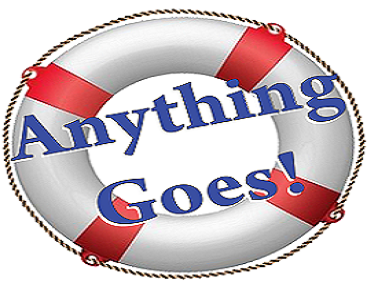 REVIEW: “Anything Goes” at the Sharon Playhouse

Cole Porter’s music has been part of the American Song Book since 1915 beginning with a little-known show Hands Up.  His breakthrough came in 1929 with Fifty Milllion Frenchmen but his place in the American Musical Theatre was guaranteed with Anything Goes in 1934 which brought stardom to Ethel Merman in the role of the iconic Reno Sweeney.  There have been revivals in 1987 with Patti LuPone and 2011 with Sutton Foster and Joel Grey as Moonface Martin.  A movie produced in 1936 starred Merman and Bing Crosby.  It is a perennial favorite in regional theatres, community theatres, colleges and high schools.  The opening production at Sharon Playhouse is an entertaining and energetic celebration of Broadway’s enduring appeal.

What makes the show special is the music and, in this revival, terrific performances.   The list of songs is a litany of hits:  “I Get a Kick Out of You,” “You’re the Top,” “Friendship,” “It’s De-Lovely,” “Blow, Gabriel, Blow,” “All Through the Night,” and, of course, “Anything Goes.”  Though the orchestra is somewhat weak at times, especially with the overture, their accompaniment of the vocalists is on the mark.

The plot, which takes place on the cruise ship American, involves two romances, several misadventures, mistaken identities, and stereotypes, is lighter than fluff, typical of early 20th century musicals.  The most famous character to come from the show is Reno Sweeney, a canny, wry and sexy nightclub singer, but the primary plot centers on Billy Crocker’s attempts to persuade heiress Hope Harcourt to marry him instead of her fiance, the stodgy British nobleman Lord Evelyn Oakleigh.  Billy, a good-hearted but ineffectual assistant to Wall Street banker Elisha Whitney, boards the ship without a ticket or passport and has to assume several disguises to avoid being discovered.  He is abetted by Moonface Martin, Public Enemy #13, who, accompanied by Public Enemy #1’s girl friend, Erma, has arrived on the ship in the guise of a minister.  Reno becomes involved in the machinations of all the characters as they attempt to solve their conflicts.

Caleb Albert’s Billy Crocker is the open-hearted innocent who gets caught in awkward situations while he fights for the woman he loves.  His “Easy to Love” is charming as is Amara Haaksman’s Hope Harcourt.  She endows the heiress with a strong sense of responsibility underlined by a humorous and sparkling personality.  This Reno (Amanda Lea Lavergne) is a dynamic force who acts, sings and dances with a delicious panache.  The comic lead Paul Kreppel as Moonface throws out rapid one-liners often matched by Erma (Seana Nicol) who is saucy, fun-loving and loveably clueless complete with a New Jersey accent.  Edward Miskie’s Evelyn is suitably pompous and unlikeable until he meets his true love when he becomes a lovesick puppy, speaking of which, there is a dog in the show who upstages the other actors attesting to W.C. Fields’ famous line: “Never work with children or animals.!” Everyone in the cast contributes to the spirit of comic and romantic mayhem in this altered script by Timothy Crouse and John Weidman.

Jason Myron Wright’s set design is dominated by a realistic multi-leveled shipboard with various inserts that roll in from the wings.  Scene changes take mere moments to ensure the pace of the production does not falter.  The lighting by Zach Pizza creates diverse tones to complement the music.  The costumes, designed by Keith Schneider, are exquisite and specifically represent the era.

Choreographer Justin Boccitto’s dance numbers are beautifully staged and perfectly timed.  The dancers are obviously well-rehearsed, including the actors who are not part of the main dancing ensemble.  Alan L-M Wager’s direction is firm and economical.  His stage pictures are well-conceived and maintain the style of the show.  He has gotten strong performances from his local cast (of which there are quite a few,) as well as the professional cast.

On opening night there was even intermission entertainment as a crescent moon and Venus overhead seemed portentous of a new era at Sharon, which is that Sharon Playhouse is doing what it does best: high-level entertainment for the community.   Anything Goes is the first production under the aegis of Alan L-M Wager (Artistic Director) and Robert Levinstein (Production Manager.)   The Anything Goes example of their approach to theatre should be supported so that the tri-state area can once again look at the Playhouse with the love and respect it enjoyed in the past.