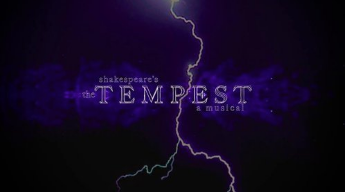 Several of William Shakespeare’s plays have been made into musicals or operas… namely. The Comedy of Errors became Rodgers and Hart’s The Boys from Syracuse, The Taming of the Shrew became Cole Porter’s Kiss Me, Kate, Othello became Verdi’s Otello.  A musical version of The Tempest is now on stage by the newly created Ghostlit Repertory Theatre Company at St. James Place in Great Barrington, Massachusetts, in a production that is provocatively far from the normal expectation but that is bursting with terrific staging, a dynamic original score and energetic acting.

Adapted by Amanda Wallace, Corey Potter and Jackson Teeley, the plot has not been changed and the lyrics come directly from Shakespeare’s dialogue.  The music by Teeley, who also directed the play with his sister Caitlin, has rock, comic, romantic and even Broadway sounds.  The staging is imaginative utilizing St. James’ small stage, the pit and the theatre’s aisles.  All the tech work is creative from the costumes to the props all brought together under the inventive direction of the Teeley siblings.  Their approach produces stage pictures and movement that are theatrically impressive.

Virtually everything is white and/or black creating a sense of neutrality of time and place.  Two lengthy stretches of diaphanous material suspended from either side of the upstage ceiling reaches down into the seating area.  These pieces and several other shorter ones are initially used to create the storm in the opening scene.  Many other Asian influenced-theatrical touches help to make this production visually exciting.  The costumes are predominantly white cotton blouses and pants with an occasional touch or item of color.  The four members of the ensemble (Austin Lombardi, Alexandra Keane, Charles Kerzner and Taylor Slonaker) also have streaks of black makeup on their faces, bare arms and legs.  The monster Caliban (Ali Louis Bourzqui) is in all black with his hands and face painted white.

The major set pieces are a huge white wooden box and an aluminum ladder on wheels; both items serve multi-purposes .  In the pit against the stage is white detritus… umbrellas (which are used as swords,) a sofa, a television set and other props that are utilized throughout the production.  A white smartphone is used by the young Ferdinand (Aiden Chalfonte) and Miranda (Brianna Nicola).

The cast are all relatively young except for Jolyn Unruh who teaches drama, acting and directing at Monument Mountain Regional High School which the Teeleys and other production personnel attended.  This is Unruh’s first stage appearance in nineteen years and though a bit rusty, she delivers intelligent line readings but does not bring Prospero’s violent anger and vocal power to the characterization.

Caroline Fairweather’s Ariel is stronger than her character is often played, following her master’s orders and fulfilling his need for revenge.  Ali Louis Bourzgui’s Caliban is a fine combination of the vengeful monster and the playful inebriate.  Miranda and Ferdinand are at first fittingly tentative and then charming when in the throes of love.  The comics Trinculo (Harrison Lang) and Stephano (Cody Lee Miller) add the strong farcical elements of the play along with their foil Caiban.  Prospero’s brother Antonio (David Bertoldi,) who stole the throne of Milan and his aide Sebastian (Connor McNinch) are suitably evil and then repentant.  Olivia Wilcox delivers a broad and almost goofy Gonzala.  Alonso, the brother of the sinister Sebastian who assisted in overthrowing Prospero and is now consumed with guilt, is played by a strong Dana M. Harrison.  The bulk of the work… moving set pieces, setting and distributing props, racing across the stage and through the pit to balance and enhance stage pictures… is done by the vigorous and athletic ensemble.

All the singers have strong voices, but the accompaniment often drowns them out and at times when in their high registers they cannot be understood.  They all use body mikes which may  distort the sound.  It may also be their energy that often causes some of the cast to deliver their lines in a hurried fashion.  Still, the plot can be followed and the characters given substance.

This is Ghostlit’s first production to be followed by Fun Home at The Barn in Egremont where members of the company performed three shows last summer and fall.  If they continue with the creative spirit, vitality and risk-taking evident in The Tempest they should grow to become a valuable addition to the Berkshires’ theatre scene.