REVIEW: “Cabaret” at the Mac-Haydn Theatre 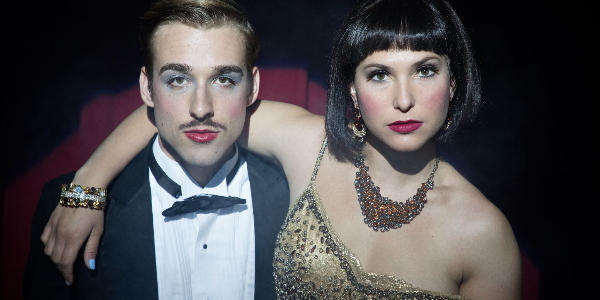 REVIEW: “Cabaret” at the Mac-Haydn Theatre

Cabaret, first produced in 1966, is set in 1929-1930 as the Nazi Party under the leadership of Adolf Hitler is growing into a major political/social force in Berlin.  This musical by John Kander (music,) Fred Ebb (lyrics) and Joe Masteroff (book) based on the play , was the Tony Award winner for best musical.  Currently playing at the Mac-Haydn Theatre in Chatham, New York, the 1998 version of the show is a gritty piece of theatre.

The opening moments set the tone as the Emcee (Pat Moran) makes his entrance, followed by a spotlight as he climbs a spiral staircase; his face hit by the light, he leers at the audience in an  erie other-worldly pose which mocks our bourgeois comfort.  We find ourselves in the Kit Kat Club, a seedy bistro whose entertainers are young men and young women of speculative sexuality.  The main plot line centers on Cliff Bradshaw (Dakota Dutcher,) a struggling American novelist just arriving in Berlin and Sally Bowles (Emily Kron,) the headliner at the Kit Kat.  Through the aid of an acquaintance, Ernst Ludwig (Nathaniel Dolquist,) Cliff finds a room in the boarding house of Fraulein Schneider (Liz Gurland) who has a gentleman friend, Herr Schultz (Fred Frabotta,) a Jew.  When Sally is fired she moves in with Cliff.  As the year progresses, the impending power grab by the Nazis becomes more and more evident.  It affects the relationship of both couples and Berlin’s social structure.

After his opening entrance Pat Moran is very different from past Broadway and film Emcees – Joel Grey and Alan Cumming.  He is more ethereal and watches the others and the events with a distant eye which belies the Emcee’s role as the guide to the moral decadence and impending disaster of Nazi Germany.  His predecessors were charmingly evil.  The impact of the Emcee’s presence should be an admonition to be mindful of what may be around the corner.  Emily Kron, last year’s Mrs. Lovett in Sweeney Todd, for which she won a Berkshire Theatre Critics Association (BTCA) award for Outstanding Actress in a Musical, brings texture to Sally, but in her upbeat moments she is sometimes over-the-top.  Still, her energy and vivacity demand attention. Her rendering of “Cabaret” is deeply emotional and internalized.

Cliff is struggling with his novel and his place in life.  He is enthralled by Berlin and tends to play more than he works.  Dutcher’s transitions are well-developed as he traverses an emotional landscape. When Sally moves in, their lives undergo tremendous changes, but the two of them are fervent in their attitudes creating conflicts that are exacerbated by the political atmosphere.  The older couple, Schneider and Schultz, contrasted with Sally and Cliff, have a simpler, more comfortable relationship but this falls victim to the times and the place.  Gurland’s early bitterness over Germany’s decline is mitigated by Frabotta’s kindness and gentility.  Their duets, “It Couldn’t Please Me More” and “Married,” are charming and beautifully sung.  Nathaniel Dolquist’s Ernst Ludwig, who befriends Cliff on the train, soon exudes the kind of slimy presence Moran’s Emcee needs.

Much of the score is theme-driven.  Fraulein Schneider’s “So What” suggests that since no one knows what tomorrow will bring, we should live now.  It also emphasizes and limns the mental state of a defeated Germany and its economic ruin which will give rise to even further horrors.  Most Germans were not cognizant of the imminent catastrophe they were facing.  The frightful “Tomorrow Belongs to Me” is first sung by the Emcee and Lulu and in a reprise by Fraulein Kost (Shannon Cunningham,) Ludwig and the company, foreshadowing the rise in perverse jingoism.  The Emcee and the company perform a sardonic “Money” defining the coming regime’s motivations.  After making a painful choice to protect herself, as happened to many sensitive German citizens, Schneider sings “What Would You Do?”  The Emcee performs “If You Could See Her” accompanied by his “girlfriend” which shows how committed Germany was to becoming anti-Semitic.

Director John Saunders also received a BTCA award last season for Mac-Haydn’s production of Hello, Dolly.  He obviously allows his actors the freedom to build their characters through his exuberant and precise staging.  Sebastiani Romagnola’s (another BTCA winner for Dolly) dazzling choreography complements and completes Saunders’ work.  In this beautifully executed show the staging and choreography readily blend together

This is a heavily costumed show; the tawdry Kit Kat costumes, complete with torn fishnet stockings for both men and women, designed by Angela Cartensen underline the desperate economic and moral diminution of Germany’s culture.  Sally’s clothes when on the Kit Kat stage support the nature of her songs whether licentiously comic as in “Don’t Tell Mama” or the wrenching “Cabaret.”  All the clothing is redolent of the early 1930’s.  Andrew Gmoser’s lighting design is akin to being a character in the play.  The subtle tones and the sudden transitions keep attention focused on the evolving situations.

If you’ve seen the original production be prepared for major changes that reflect the era (1998) in which it was revised.  There is much more licentiousness and, in the choreography especially, more sexually, almost explicit, contact along with the use of hard drugs which seems to suggest how desperately people attempt to deaden the pain.

However, despite the flaws, this is a fascinating production.