REVIEW: “The Road to Mecca” at Silverthorne Theater 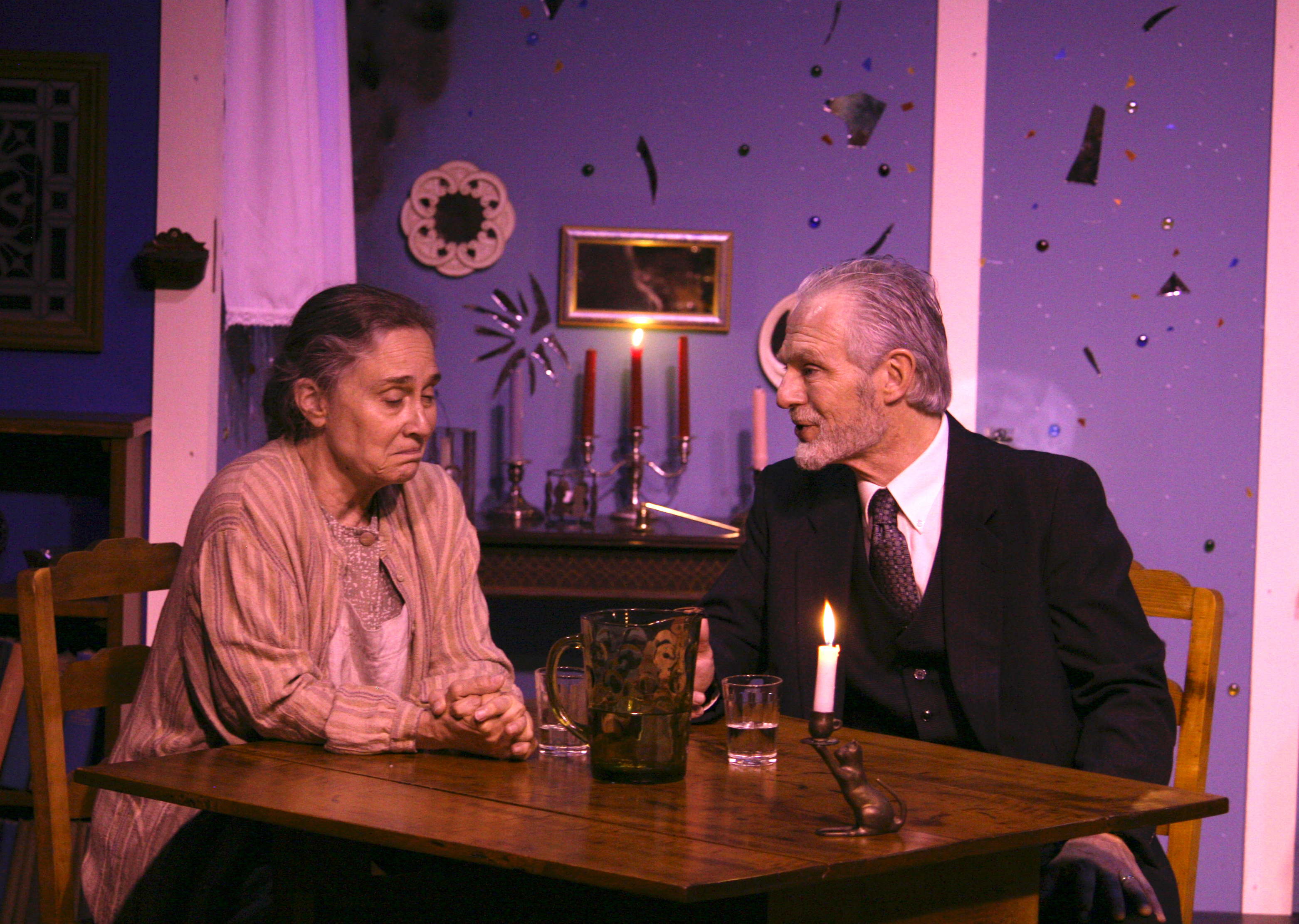 REVIEW: “The Road to Mecca” at Silverthorne Theater

The Road to Mecca, South African playwright Athol Fugard’s 1984 play about an elderly artist in a remote desert town, is being given a rich, thoughtful production at the Silverthorne Theater in Greenfield.

Elsa Barlow, a young school-teacher in Cape Town, has driven 12 hours to the desert region of Karoo, to visit her elderly friend Miss Helen, who has sent her an alarming letter. The apparently somewhat dotty Miss Helen, disheveled and flustered, bustles about with the tea kettle, begging Elsa to stay more than just a night, as the somewhat prickly Elsa unspools tales about her troubles: she has encouraged her students at the “colored” school to write essays protesting apartheid, and is in danger of getting fired.

Helen, it turns out, is in some trouble herself. She is an artist who has populated her yard with owls and mermaids, camels and  wise men, all looking to the east, towards Mecca. This profusion of imagination has discomfited the villagers–children throw rocks at her sculptures, and few people visit her anymore. Most concerned is her old friend Marius, the church pastor. Convinced that she is no longer able to care for herself, he is pressuring her to leave her home for confines of the Sunshine Home for Our Aged and, lonely and depressed, Helen is almost ready to sign the papers.

The play unspools as a series of lengthy, sometimes stagy monologues laying out Fugard’s themes and preoccupations: the political–the horrors of apartheid and its toll on the bodies and souls of South Africans, both black and white; and the personal– the intense pressures to conform in a small town,  the overarching drive of an artist to create, no matter the cost. Fugard is not a subtle playwright and the metaphors — lighting candles to beat back the darkness, for example — can be heavy-handed. But in the hands of an actress like Jeannine Haas, who plays Helen with luminous passion, Fugard’s graceful language and deep empathy for his characters are both absorbing and immensely affecting.

The first act sometimes drags, as Elsa and Helen explain their relationship to each other. The younger woman’s insistence that Helen must beat back Marius’s plot to put her away in a home is gradually undermined by creeping doubts about Helen’s ability to care for herself — Helen has burns on her hands and there are mysterious smoke stains on the wallpaper.

Marius’s arrival at the end of Act 1 give the play a welcome jolt.  The second act is structured as a battle between Elsa and Marius, each trying in turn to convince Helen that they have her best interests at heart. Marius initially seems like a moralistic scold, horrified that Helen has stopped going to church, practically nauseated by the heretical imagery of her art, seemingly unaware that if children were throwing rocks, they were probably encouraged to do so by the adults around them. Elsa is even more doctrinaire, even harsh, haranguing Helen to hold up Elsa’s own vision of a woman’s independence. Helen, for long stretches, listens silently, unable to get a word in about what she wants for herself.

There is no simple good guy/bad guy here: Marius, especially in Chris Devine’s nuanced and sensitive portrayal, believes to his core that he is acting out of love and concern for his old friend. As Elsa, Mo Mosley (a South African actress who also coached the other two in their mostly very convincing accents) comes off as abrasive and self-absorbed even though she adores Helen. It is Haas, as she finally reveals Helen’s vision of the glittering lights of Mecca, who cuts through the verbiage to movingly reveal how she is driven to create a landscape of glittering light.

Rebecca Hall’s staging is unshowy and effective, with the characters allowed to simply sit or stand still, putting the emphasis on the words. Occasionally the actors are caught for long stretches standing awkwardly behind the ornate blue velvet sofa that takes up much of the downstage area – I found myself mentally trying to reorganize the furniture to make it less obtrusive and give the actors more room to roam. The house itself, by set designer Molly Hall, feels like a creative person lives there: the walls are aqua and purple, with worn rugs layered on top of each other, objets d’art and candelabras on every surface. The ground-up glass Miss Helen embeds in the walls as part of her drive to bring light into the darkness is here, disturbingly, shards of broken mirrors attached to the walls, as if to indicate the broken state of Helen’s psyche. We never see the garden – it lives in Helen’s imagination, from whence it sprang.

The Road to Mecca by Athol Fugard, directed by Rebecca Daniels,  presented by the Silverthorne Theater Company, is playing at the Hawks & Reed Performing Arts Center, 289 Main Street in Greenfield, through June 30.  Tickets are $18 and $20, and are available at http://www.silverthornetheater.org or by calling 413-768-7514. Run time including intermission approximately 2 hours 30 minutes.