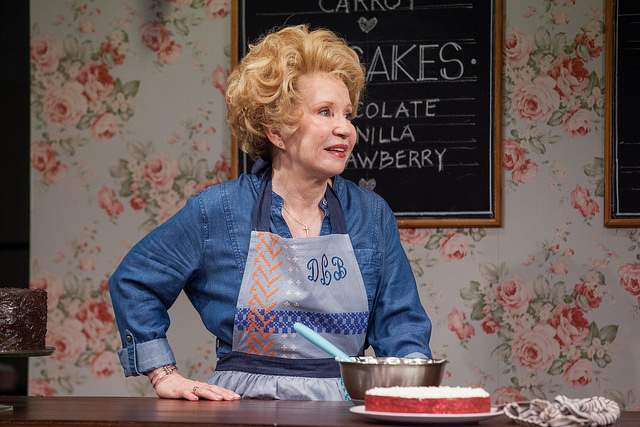 Directions for a perfect production of The Cake:   start with a brilliant, sensitive and brave playwright (Bekah Brunstetter), add a director who understands the playwright’s message and translates it beautifully from page to stage (Jennifer Chambers), throw in a multi-talented actress who can embody the inner life of a baker in her every look, word, or movement while frosting a cake (Debra Jo Rupp), and mix in a surprisingly versatile set (designed by Tim Mackabee) and a terrific ensemble cast.

It becomes clear early on that this Barrington Stage offering is not a typical summer production limited by a short rehearsal process.  The Cake has had a chance to find its legs beginning with the World Premiere at The Echo Theater in Los Angeles (also directed by Chambers), with subsequent productions at the La Jolla Playhouse and The Alley Theatre in Houston; an upcoming run is slated for the Manhattan Theatre Club in New York City in March, 2019.

Brunstetter is not a newcomer to the theatre nor to television, where she writes for Starz’s American Gods and is a writer/producer for NBC’s hit series This is Us. Rupp, a BSC Associate Artist, is not new to this play, having won L.A. Stage Ovation and L.A. Drama Critics Circle Awards for her role as Della.  The Cake arrives at Barrington Stage Company with a long and well-deserved pedigree.

The play follows the journey of Della, who owns a bakery in Winston-Salem, North Carolina.   A deeply religious woman, she knows the importance of accurately following directions, both in her cake recipes and in her life.   But when Jen (Virginia Vale), the daughter of her deceased childhood friend, visits the bakery requesting that Della create a cake for her lesbian wedding, the baker’s whole belief system is thrown into disarray.

In an article by Daryl H. Miller in the L.A. Times (June, 2017), Brunstetter explains that she was raised as a Southern Baptist in Winston-Salem but as an adult moved to New York and then Los Angeles.  As a result, she has always felt split between the two worlds.  This is the predicament of Jen, whose heart is set on getting married in the town of her birth with the money her Mom left her for a fancy wedding, though she lives in New York with her fiancée, Macy (Nemuna Ceesay), a smart black woman who warns against the bigotry she has been fighting all her life.

What Brunstetter has done in this miraculous play, both comic and moving, is to create absolutely human characters faced with the need to adapt to a changing world.  Della is a lovable conservative frightened at the thought of altering her views:   “the world’s gonna change and we cannot.  We must follow the directions til’ we die.  Right?”  As we watch her wrestling with her emotions we realize that we cannot expect her to throw out everything she believes without a struggle any more than gluten-free, sugar-free Macy can force herself to eat a piece of cake.

Amplifying Della’s struggles is the unseen George (Morrison Keddie), whom she describes as a handsome British judge with a “voice like a king” on the Great American Baking Show, where Della is scheduled to be a contestant.  Thanks to the lighting and sound designers (Matthew Richards and Alexander Sovronsky, respectively) George’s resonant voice interrupts scenes, ostensibly giving Della instructions about what she needs to bake in order to win the contest.  But gradually he becomes darker, serving as a sort of conscience, accusing and threatening her with failure on the show.

Mackabee’s set, a charming, authentic-looking bakery with two tables, chairs and a refrigerator in the rear, is filled with shelves displaying gorgeous cakes (from Simply Sweet Berkshires).  Two of the bakery walls revolve to delineate bedrooms, complete with double beds.  These set changes are accompanied by evocative piano music supplied by composer Sovronsky.  Moving from the bakery to the bedrooms is accomplished quickly and easily—a tribute to the recently expanded St. Germain Stage.

Vale and Ceesay are excellent as the two brides whose commitment must be strong enough to override their divergent backgrounds and the powerful connection between Jen and Della.  Douglas Rees as Della’s loving husband, a plumber, is fine as he tries to meet the challenges posed by his wife’s sometimes unusual demands.

But this play belongs to Debra Jo Rupp, who registers each line and pause with pulsing life, like the notes on the scale of a musical instrument.  Brunstetter, through Rupp’s glorious performance, has helped us to find a way in these difficult times to look into each other’s hearts and view the humanity we all share.