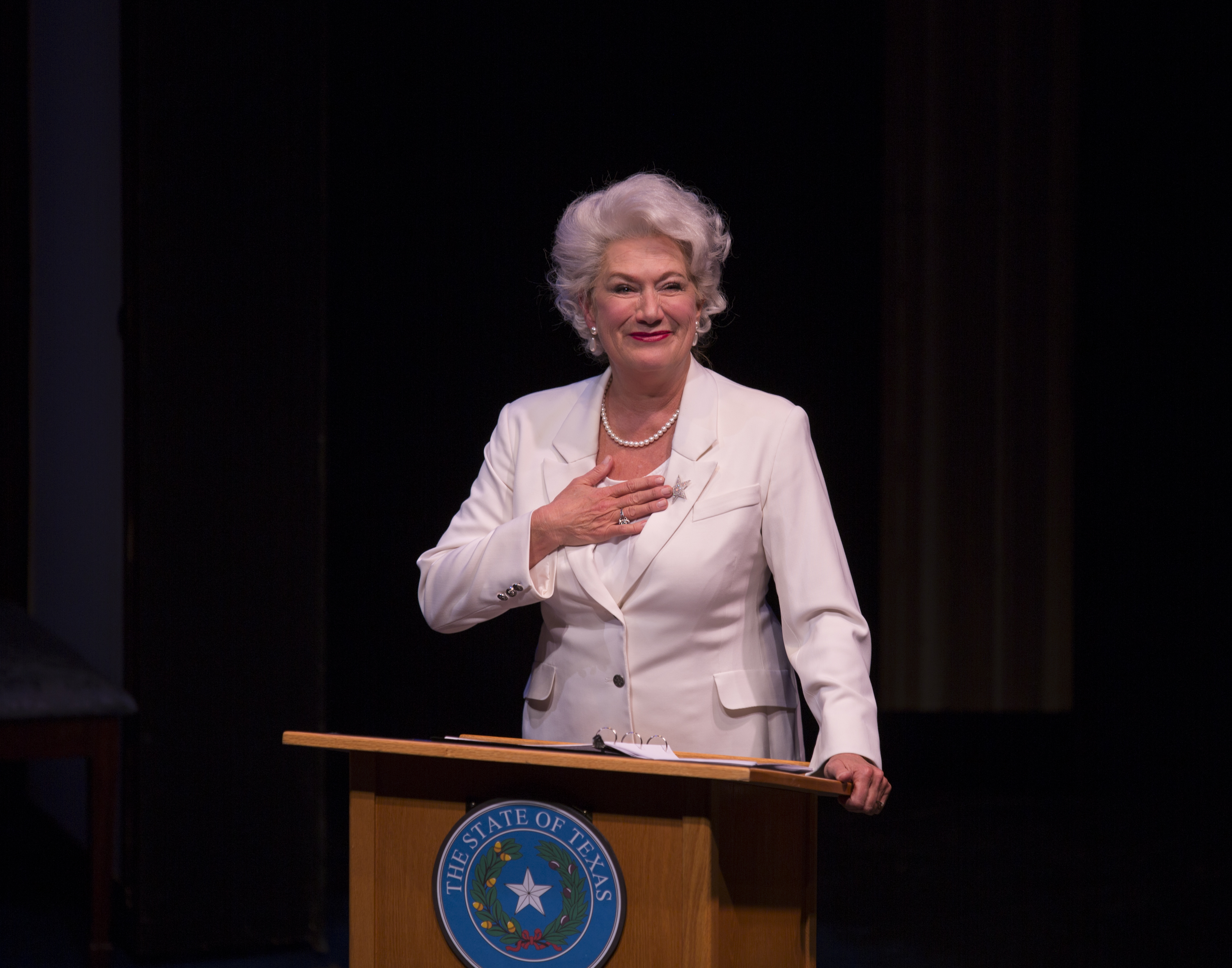 Ann Richards has become an almost legendary character in a relatively short amount of time.  She was the second female governor of Texas, serving from 1991-1995, as a Democrat in a highly conservative state.  Her colorful life has been brought to the stage by playwright Holland Taylor and is being performed in a one-woman show, Ann, by Jayne Atkinson, produced by WAM Theatre at Shakespeare & Company’s Tina Packer Theatre, Lenox, MA.

The play begins with excerpts from her keynote speech at the Democratic Convention in Atlanta, Georgia, in 1988 which introduced her to the rest of the country.  The play then shifts to her delivering a commencement speech at an unnamed college.  She reviews her early life with a multitude of humorous anecdotes and an occasional aphorism as advice to the students.  She tells us (the audience are the graduates) about her childhood, her marriage which ends in divorce, her alcoholism and gratitude to AA, her four children, her entrance into politics as the county chairman and then state treasurer before becoming governor.

With a change of scenery she takes office and a change of personality as we watch a day in her life as the state’s chief executive.  Through this day she has conversations and arguments with staff members concerning serious issues: a woman’s right to choose, gun control, diversity, capital punishment, gay rights and more.  Integrated with politics and government is a series of telephone calls involving a family outing which has caused conflict among her children.

After she is defeated by George W. Bush in her attempt at reelection, Ann takes a position in New York where she continues to fight for those issues that are important to her.

Though there is a multitude of wry one-liners, playwright Holland also depicts Richards’ spirit, intensity and compassion.  Richards says she has never run away from a fight, and we can believe her.  There are some preachy lines such as, “Life isn’t fair, but government should be.”  Her language is colorful.  She talks about a time when, at a gathering of young people of all nationalities and races, she says it was “…a confetti of kids.”  Toward the end of the play she tells the students they have the responsibility to vote.  Along with insightful comments, however, there is an abundance of cliches.  But they work because they are what politicians often say.

Atkinson, directed by WAM artistic director Kristen van Ginhoven, has captured Richards’ mannerisms and the flow of her Texas speech pattern.  There is a resemblance between the two women, not only physically but in the way Atkinson carries herself and delivers her lines.  Though Richards had a giant personality, Atkinson has not made her a caricature; rather, she has given life to the governor’s charisma in a strong performance.

Van Ginhoven maintains the pace of the play by respecting the texture of the writing and by making smooth transitions from wit to sardonic comments to moments of sensitivity and passion.  Solo performances can be static, but here there is variety in the  staging abetted by the artful sets designed by Juliana von Haubrich which change seamlessly from the commencement stage to the governor’s office, the New York office and back to the graduation site.

The lighting design by Andi Lyons is unobtrusive and enhances the tone of the play while M. L. Dogg’s sound enriches various scenes.

WAM Theatre focuses on plays about women and girls and whose staff is predominantly female.  More importantly, however, is the fact that they give a percentage of their gross income to deserving organizations around the world that direct their services to women and girls.

Ann is an entertaining play that studies the daily workings of government as it reflects on the character and accomplishments of an American icon.