REVIEW: “Now Circa Then” at the Chester Theatre Company 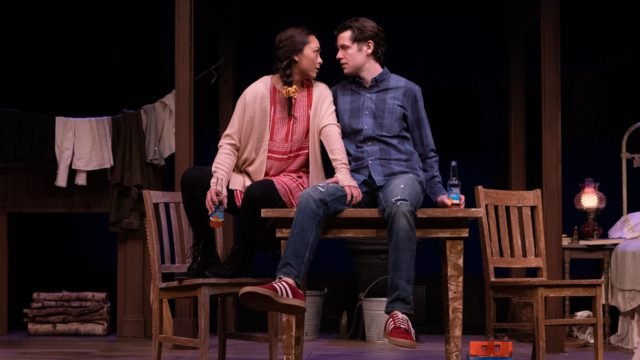 REVIEW: “Now Circa Then” at the Chester Theatre Company

The audience at Chester Theatre Company is greeted by Julian and Josephine Glockner as they introduce a re-enactment at a tenement museum in the Lower East Side of Manhattan.   Something does not ring quite true since Julian has an Eastern European accent and Josephine is very American though the actual Glockners came to America in the late 19th century.  This is the initial setup in Chester’s disarming production of Carly Mensch’s Now Circa Then.

Gideon (Luke Hofmaier,) with his passion for history, has participated in myriad re-enactments while Margie (Lilli Hokama,) a Japanese-American who has just arrived in New York from Michigan, is in a re-enactment for the first time.  He is dedicated to the accurate portrayal of the characters portrays.  The manual they receive containing the details of the lives of the Glockners is sacrosanct to Gideon and cannot be altered.  Margie is participating simply because she needs a job.  The odd pairing is attributed to the lackadaisical curator of the museum, Roberta, who never appears on stage.

Gideon has erected a wall around himself so that he doesn’t have to confront the earlier part of his life, in particular his mother whom he describes as a virtual saint.  He has emotionally closed himself off and confesses to Margie that he has never had a girl friend.  She is more open  as she admits that she had a relationship back home but now she needs to find herself and fulfill her aspiration to do something important in life.

The play is something of a romantic comedy as the two develop a personal connection that is soon reflected in the lives of Julian and Josephine.  The relationship inside and out of the re-enactment, however, is not always loving.  This leads to some comic and conflicting moments in the lives of both the historical and contemporary characters.  The end of the play has a few twists as the two re-evaluate their lives.

The two leads are charming and their performances are tightly controlled.  Hofmaier is personable as Julian but becomes pedantic when he returns to Gideon.  He is lanky and handsome, though his Julian is somewhat goofy-looking especially when he interacts with the audience which occurs several times.  He becomes more introspective revealing a part of Gideon we have never seen.  Margie is a young woman unable to identify herself.  Her confusion and then the journey to self-realization is neatly evolved by Hokama as she takes hold of herself and realizes what life can offer her.  Both actors play the comedy with verve and the disagreements with authority.

Though the script is of the romcom nature, serious human difficulties are confronted and genuinely portrayed through Mensch’s dialogue.  The development of character and conflicts occur naturally lending verisimilitude to Margie and Gideon’s story.  She has created likable people who demand our empathy but are also open to our criticism.

Directed by Sean Christopher Lewis, the play is nicely staged.  Amidst the tenement apartment beautifully designed by David Towlun with its tin ceiling, clotheslines and authentic-looking furniture, Lewis uses the space and furnishings to compose interesting pictures.  There are a number of scenes, some only a minute or two long, that flow smoothly with out hampering the pace,  The comic scenes are played straight without descending into buffoonery while the serious moments are emotionally touching.  Margie and Gideon could be grating but Lewis gives them a warm side that the audience embraces.

In addition to Towlun’s realistic set, the contemporary clothing by Heather Crocker Aulenback is obviously in contrast with the authentic turn of the 20th century costumes.  Lara Dubin’s lighting and Tom Shread’s sound enhance the tone of the varied scenes.  The production qualities at Chester are always well-designed.

This is a warm, sweet play beautifully acted and staged.  It is a treat to see Now Circa Then.