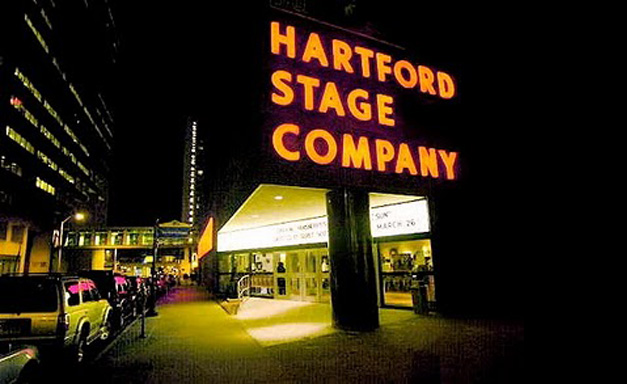 Tickets are also on sale for the 22nd season of the family holiday favorite, A Christmas Carol–A Ghost Story of Christmas – directed by Hartford Stage Artistic Associate Rachel Alderman.

Directed by KJ Sanchez
A reimagining of Don Quixote by Miguel de Cervantes
Quixote Nuevo is produced in association with Huntington Theatre Company and Alley Theatre.

Quixote Nuevo is set in the fictional modern-day border town of La Plancha, Texas, where Don Quixote loses himself in stories of chivalrous escapades and embarks upon a quest of imagination, adventure, and Tejano music. Along the way he recruits a hapless but trusty sidekick in his search for lost love. As the community wrestles with containing Quixote’s fantasies, he, his family and friends discover the joys and perils of being the hero of your own story.

An ode to modern-day motherhood, Cry it Out peers into the lives of four new parents with nothing in common except sleep deprivation, unreliable childcare and the notion of “having it all.” The darkly funny comedy takes a smart and honest look at the power of female friendship, the dilemma of going back to work after being home with a newborn, and the effect social class has on parenthood in America.

The magic of Charles Dickens’ heartwarming classic will return for its 22nd season. Come see Connecticut’s favorite family holiday tradition and spend some time with Ebenezer Scrooge, Tiny Tim, Bob Cratchit, Jacob Marley and the ghosts of Christmas Past, Present and Future as they bring A Christmas Carol to life on stage.

Written and Performed by Nilaja Sun
Directed by Ron Russell

In Pike St., Sun vividly brings to life three generations of a Puerto Rican family on New York’s Lower East Side. Evelyn, a mother struggling to hold her life together with both grace and humor as she cares for her immobilized daughter and supports her womanizing father, relies on money from her brother who is serving abroad in Afghanistan. When he comes home, suffering from PTSD, Evelyn fights for her family’s healing, redemption and survival in the face of a threatening storm – both natural and man-made.

By Charlotte Brontë
Adapted and Directed by Elizabeth Williamson

Brontë’s beloved tale of courage, sacrifice and self-respect features one of literature’s greatest heroines. Orphaned as a child, Jane takes a position working as governess at Thornfield Hall for the brooding Edward Rochester. The strong-willed Jane falls in love with her mysterious employer, but the discovery of a dark secret and its devastating aftermath forces the young governess to make a heart-wrenching decision that changes their lives forever. Williamson’s adaptation will be intimate and intense, focusing on Jane’s integrity and inner strength.

With international war looming, England’s King George V dies, leaving the Crown and the crisis to his youngest son Bertie. Shy, fragile and afflicted with a profound stammer, Bertie is ill-equipped to inspire and lead a people now instantaneously informed by a new invention: the wireless radio. He seeks help from Harley Street doctor, Lionel Logue, and finds an unexpected friendship. But can Logue actually cure the King? Their success or failure as therapist and patient will seal their destiny, the destiny of England and, perhaps, the world. The King’s Speech premiered at the Yvonne Arnaud Theatre in the UK before debuting on the West End. The film that followed the play won four Academy Awards, including Best Picture, Best Director, Best Actor and Best Original Screenplay for David Seidler.

Ah, Wilderness! takes place in a picturesque Connecticut town at the turn of the 20th century and paints a nostalgic portrait of small-town values, teenage growing pains, and young love. The warm-hearted play centers on teenaged Richard Miller, an aspiring poet who falls in love with the “girl-next-door.” His love letters and ensuing adventures lead his parents to recall their own romance and youth. Bensussen’s adaptation of O’Neill’s only comedy promises to be a joyous ode to Americana and the celebration of family, infused with period-appropriate live music.

Renowned for producing innovative revivals of classics, as well as provocative new plays and musicals,  Hartford Stage has earned many of the nation’s most prestigious awards, including the 1989 Tony Award for Outstanding Regional Theatre. Additional national recognition includes honors from the Outer Critics Circle, Drama Desk, American Theatre Wing (OBIE), and the New York Critics Circle.

Hartford Stage has produced over 80 world and North American premieres, including the new musical Anastasia, which enjoyed a two-year run on Broadway; A Gentleman’s Guide to Love and Murder, winner of four 2014 Tony Awards, including Best Musical and Best Direction of a Musical; and Quiara Alegría Hudes’ Water by the Spoonful, winner of the 2012 Pulitzer Prize for Drama. Other notable premieres include The Engagement Party by Samuel Baum; Make Believe by Bess Wohl; The Age of Innocence by Douglas McGrath; Seder by Sarah Gancher;Rear Window, adapted by Keith Reddin, and starring Kevin Bacon; An Opening in Time by Christopher Shinn; Reverberation by Matthew Lopez; Big Dance Theatre’s Man in a Case with Mikhail Baryshnikov; and Breath & Imagination by Daniel Beaty. Nationally-renowned titles include the New York transfers of Enchanted April; The Orphans’ Home Cycle; Resurrection(later retitled Through the Night); The Carpetbagger’s Children; and Tea at Five.The leading provider of theatre education programs in Connecticut, Hartford Stage’s offerings include student matinees, in-school theatre residencies, teen performance opportunities, theatre classes for students (ages 3-18) and adults, afterschool programs and professional development courses.