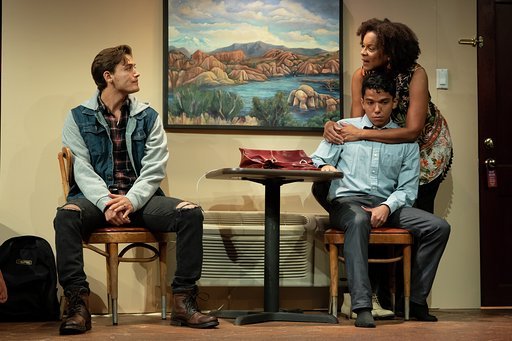 In a motel room in New Mexico a small group of relatives meet the night before they are to attend a funeral for another family member.  Rachel Bonds’ play Curve of Departure draws out the love these people have for each other as they touch upon sensitivities and apprehensions.  This funny and challenging production at the Chester Theatre Company in Chester, Massachusetts highlights the insight and intelligence of its cast.

Rudy (Raye Birk,) a crotchety old man with failing memory and his daughter-in-law Linda (Ami Brabson) have come to New Mexico from New York to observe the funeral of Rudy’s son Cyrus, Linda’s ex-husband.  Due to his illness, Linda, a teacher, has cared for Rudy through his declining years.  Their affection for each other is obvious as he recognizes what she has done and is doing for him and how she, in turn, feels responsible for the old curmudgeon.  They are waiting for Felix (Paul Pontrelli), Linda’s son and Rudy’s grandson, to arrive from Los Angeles with his life-partner Jackson (Jose Espinosa).

The three family members are not fond of Cyrus but have begrudgingly decided to attend the funeral.  He has been a disappointment to his father and late mother for abandoning Linda and Felix years before and entering into a new marriage.  Jackson, who is peripheral in this immediate situation, has a family problem of his own.  His drug-addicted sister with her abusive partner has a two-year old daughter that he is fostering with Felix.  A conflict between the two men arises when Jackson states he wants to adopt the child.  Felix, who has a lucrative profession, concerned about the costs of adoption and raising the baby, is apprehensive about his abilities to be a father given the negative role model presented by Cyrus.

The conversations amongst the four reveal elements of their pasts subtly without over-acted epiphanies.  As they wend their way through fond and hurtful memories tempered by laughter, their fears and their love are palpable.  This is to the credit of the cast and director Keira Naughton.  She has effortlessly moved her actors into moments of apprehension and comfort while maintaining underlying tensions.  Rudy’s digestive problems produce both laughter and compassion; Linda’s concern for the men in her now-extended family is always evident as she advises and shepherds them to acceptance of their various relationships.  Felix, though he loves Jackson, is self-protective and Jackson finds the determination to follow his familial instincts by choosing adoption of his niece with or without Felix.  All of these problems and their solutions are within the context of family life.  Birk, Brabson, Espinosa and Pontrelli play their scenes and emotions with truth and understanding.

Juliana von Haubrich’s set is redolent of a generic motel room with its two queen-size beds, rickety extra cot, television set, kitchenette and mini-refrigerator; the bland colors attempting to comport the guests.  The costumes designed by Stella Schwartz suggest the characters’ personalities and status.  Felix, for instance, is casually but nicely dressed while Jackson, who drifts from job to job, wears jeans with frayed holes at both knees.

Matthew Adelson’s lighting, in addition to the occasional car lights that come through the windows, also has the light from the off stage bathroom evident as people enter and exit the facility.  The sound by David Wiggall creates the sounds associated with this familiar location as well as the morning bird calls of the awakening desert.

In a moving monologue Rudy sums up life with simple profundity.  His lyrical thoughts create a play that is involved, comic and very human; it typifies the work this vital and vibrant theatre consistently offers.