REVIEW: “The Brothers Size” at the Ancram Opera House 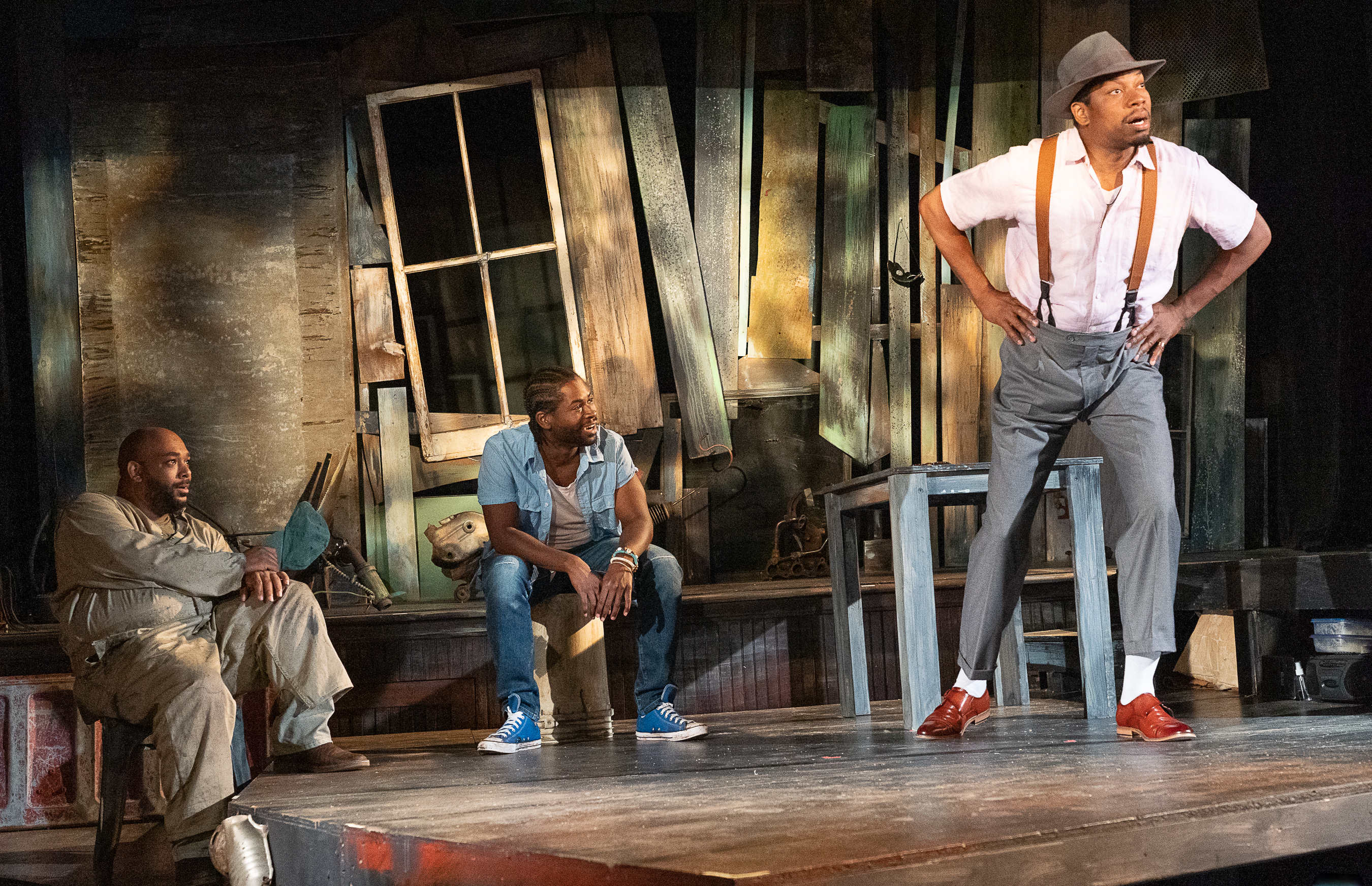 REVIEW: “The Brothers Size” at the Ancram Opera House

Nestled in the southeast corner of Columbia County is The Ancram Opera House, formerly a grange hall built in 1927.  Currently, according to co-directors Jeffrey Mousseau and Paul Ricciardi, one of the missions of this intimate performing space is to “showcase contemporary theatre and alternative cabaret” by “visionary theatre artists at the top of their field yet rarely seen in our region.” Another is “to foster an audience’s immersion with a performance to make it complete.”  Tarell Alvin McCraney’s The Brothers Size, now playing, embodies these goals beautifully.

McCraney, a Tony nominee for Choir Boy and Oscar winner for Moonlight, joins Taylor Mac and more recently Stew and Heidi Rodewald (award winners for Passing Strange) in a cutting-edge lineup of talent gracing the little town of Ancram.  The Brothers Size is part of McCraney’s trilogy, The Brother/Sister Plays, performed at the McCarter (Princeton), The Public (New York City), Steppenwolf (Chicago), and the Young Vic in London.  This play, set in Louisiana near the bayou, concerns the relationship between two brothers—the older Ogun (Geovonday Jones) and the younger Oshoosi (Jovan “Kofi” Davis) Size, reunited after Oshoosi’s release from prison–and the attempt by Elegba (Brian Demar Jones), who served time with Oshoosi, to insert himself between the brothers in a struggle for the younger man’s soul.

Yoruba culture—songs, histories, stories from Southwestern Nigeria– infuses The Brothers Size, including the very names of the characters.  Director Martine Kei Green-Rogers observes that “ritual and reality intertwine in [this] story that transcends culture and time.  The audience is at once the community, the witness and the judge.”  Indeed, the players often interact with the audience:  sitting next to patrons viewing the action, handing them food or props, and describing their characters’ activities, entrances, exits or emotions in the third person.  For example, Oshoosi announces:

He then proceeds to sing.

For Green-Rogers this meta-theatricality is a gift for us to treasure.  It is rarely seen onstage nowadays, though no less a luminary than Bertolt Brecht long ago suggested third person narration as a way for actors to achieve his alienation effect.

Green-Rogers proves to be adept at directing and choreographing both the ritualized and the realistic scenes in The Brothers Size.  The script is written in poetic form in the style and language of Shange’s For Colored Girls who have considered suicide/when the rainbow is enuf and Mason’s For Black Boys who have considered homicide/when the streets were too much, so that even in scenes with “realistic” dialogue, rhythm inflects every conversation.  Music, movement, masks, sounds, drumming, stomping, dancing, and singing enhance the ritualized scenes, making them powerful and compelling, often playing out as nightmarish dreams.

The actors do a fine job of presenting and portraying their characters, each distinctive and different from the others.  As in many of August Wilson’s plays, every character has his moment to shine in a monologue that reveals his inner self.  Geovonday Jones’s Ogun, a hard-working car mechanic, has had to bear the burden of caring for his irresponsible younger brother since their mother passed away years earlier. Jones forces us to feel Ogun’s pain, torn between bitter resentment at giving up his own dreams and heartbreaking devotion to his baby brother. Threatened by Elegba’s corrupting influence, Ogun strives desperately to save his brother.  The elegant Brian Demar Jones is electric in the role of Elegba, who refers to himself as Oshoosi’s brother.  Dressed like a pimp (by costume designer Caitlin Cisek) or a modern day serpent, he tempts Oshoosi emotionally and physically, literally wrapping him in his arms (Jones towers over Davis) as he wrenches his prey from Ogun.  One of Demar Jones’s most memorable scenes is his two way conversation with himself as he plays a black man confronted by the LAW, in a darkly comic passage.  Davis’s Oshoosi, vulnerable and perhaps a bit too passive, is the prize fought over by the other two.

Sarah Edkins, the set designer who also worked her magic in Homebody, has created a brilliant environment for actors and audience alike, with minimal set pieces used to maximum effect.  By using a thrust, protruding diagonally from the raised stage behind it, Edkins creates an unusual seating arrangement to its front and side.  The movable set pieces are a table, metal chair, and a pair of round, stacked plastic containers that serve as chairs as well as drums.  Stage left is a tall box, used as a bed for Oshoosi, who is eternally tired, with a storage area for props underneath. Yoruba artists, known for their bronze sculptures, are represented by two metal (perhaps copper) figures—one on stage left that looks like The Wizard of Oz’s tin man and the other shorter one stage right, appearing to be an animal (perhaps a pig?)– in addition to metal work along the walls of the theatre.  Lighting designer Jesse Portillo makes the most of the randomly placed wooden slats above the raised stage, between which we can distinguish day from night, and Sun Hee Kil provides the very effective mood music separating the scenes.  Utilizing every inch of the thrust, the area below it, in front of it, and even the theatre’s aisles, Green-Rogers’ staging is dynamic and exciting.

The Brothers Size offers its audience the kind of total theatrical experience, utterly surprising yet completely engaging, that we have come to expect from The Ancram Opera House.  Its patrons are in for another treat with McCraney’s play.

THE BROTHERS SIZE runs from August 8—25, Thursday through Saturday at 8pm and Sunday at 3pm.  Tickets may be purchased online at ancramoperahouse.org/the-brothers-size.