REVIEW: “The Merry Wives of Windsor” at Shakespeare & Company 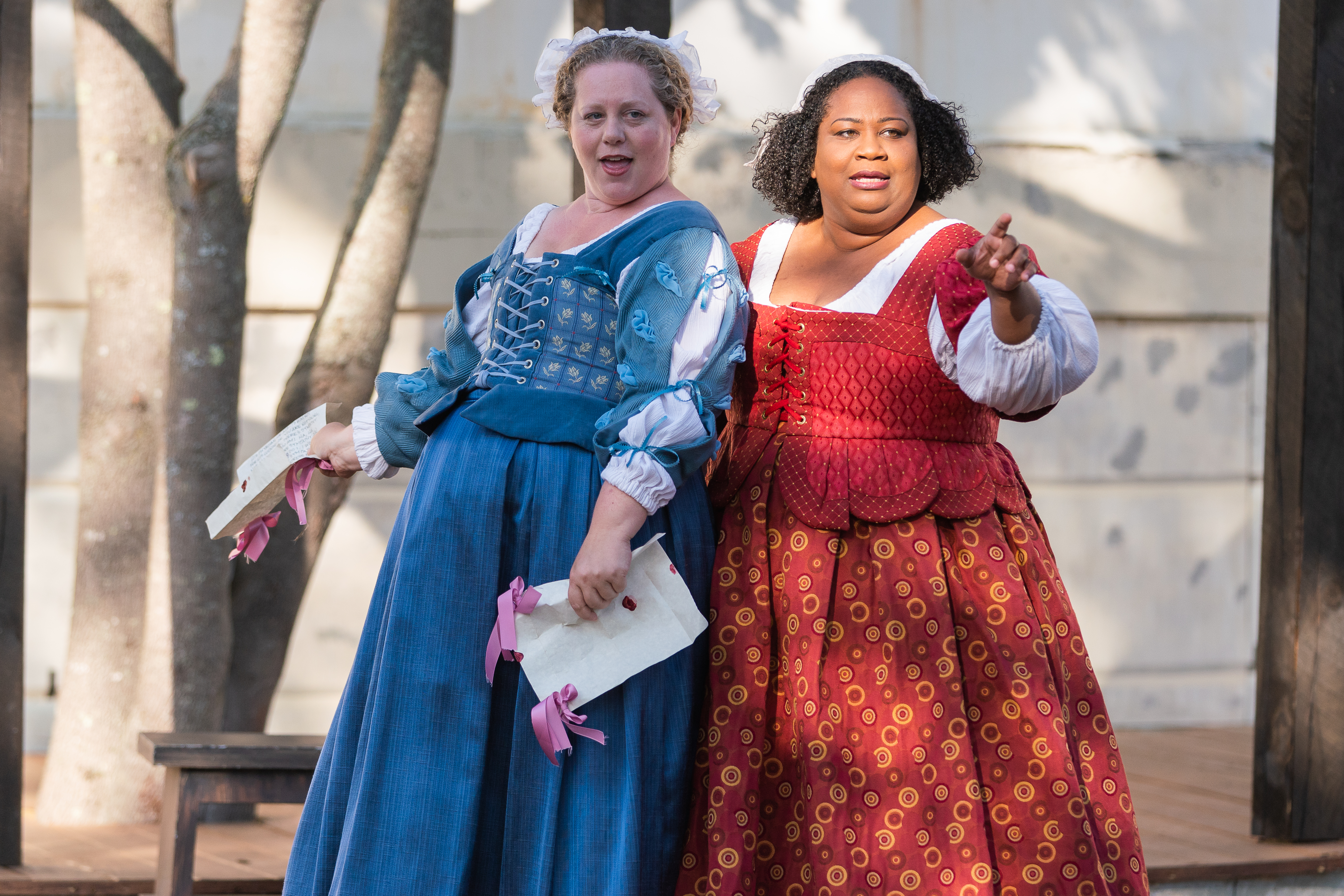 REVIEW: “The Merry Wives of Windsor” at Shakespeare & Company

Kevin G. Coleman, the Director of Education and founding member of Shakespeare & Company, and runner-up for the Tony Award for Excellence in Theatre Education (2016), believes that “The Merry Wives of Windsor is Shakespeare having fun.  Period.  No grand themes. No deep waters.”  And that’s what he provides in his direction of this farce, now playing at Shakespeare & Company’s outdoor Roman Garden Theatre.

This company has always set a premium on education, with its extensive outreach programs to teachers and students throughout the Northeast, including the annual Fall Festival of Shakespeare, which brings together ten high schools in nine-week workshops that culminate in a weekend of full productions (abbreviated) of several Shakespeare plays.  Over the summer the Riotous Youth programs of two-week sessions for students ages 7-15 offer an opportunity to perform on Friday afternoons, and school residencies of one day to ten weeks introduce students from elementary through high school to Shakespeare’s text, culminating in a community performance.  Their one month January intensive for actors is often the training ground for future company members.

In this way, Shakespeare & Company builds its own unique version of a repertory theatre, training future generations of actors who often return each season to perform in their productions.  In the present gender-crossing, age-crossing, exuberant production of The Merry Wives of Windsor, Coleman, a master teacher, has incorporated young people in combination with more experienced actors. The two youngest cast members are Tobias Goodman, 15 years old, and Mary Shalaby, a high school senior, who trained with the company in their schools, and are each admirably interpreting several distinct roles.

The convoluted plot, especially difficult to understand in the long first act, concerns itself with the comical, overweight Sir John Falstaff (Nigel Gore), a favorite character from the Henry IV plays.  It is said that Shakespeare wrote this in a hurry by royal command perhaps because Queen Elizabeth, according to an old tradition, expressed a wish to see Falstaff in love.  Here we find him wooing Mistress Ford (Jennie M. Jadow) and Mistress Page (MaConnia Chesser), the wives of the title.  Falstaff, driven by lust and greed (acquiring their husbands’ money), infuriates the jealous Master Ford (Martin Jason Asprey), and provides the wives, disgusted by his identical love letters to each of them, the opportunity for revenge.  Another plot involves the Welsh parson, Sir Hugh Evans (Bella Merlin), who is visited by Justice Shallow (Madeleine Rose Maggio) and his cousin Slender (Gregory Boover), both conned by Falstaff and consequently also seeking revenge.  Evans talks Slender into wooing the daughter of Mistress Page, Anne (Jordan Cobb), whose mother wants her to marry the French physician, Dr. Caius (an amusing Glenn Barrett), though she is in love with a gentleman named Fenton, played by the ubiquitous and endlessly inventive Boover.  Adding to the confusion is the doubling of cast members, despite the wonderful costumes (by Kiki Smith) that strive to distinguish the characters.

Coleman, a brilliant actor whose clowning onstage has entertained generations of patrons, encourages every cast member to play his/her character to the hilt—no choice is too outlandish or too anachronistic  for these performers or designers, including rock music between scenes and hilarious sound effects (by Amy Altadonna).  The second act is a marvel of comic antics as easy to understand as the first act is dense.  Two towering performances are Nigel Gore’s Falstaff and Martin Jason Asprey’s Ford.  Their many years of experience is obvious:  between them they have been with Shakespeare & Company for thirty-eight seasons (12 for Gore and 26 for Asprey, son of Tina Packer, founding Artistic Director).  Their scenes together are priceless, as Ford pretends to be Master Brook (unknown to Falstaff), who claims that his love for Mistress Ford will be requited only if the gullible Falstaff, well paid for his trouble, can demonstrate, by sleeping with her, that she is willing to be unfaithful to her husband.  Repeatedly Ford shows up just as Falstaff is about to make his move, depriving him of his desired evidence while causing injury and humiliation for Falstaff as he attempts to escape detection.  Ford’s subsequent soliloquies about the misery of being married are comic gems.  In the end, predictably, everyone is revenged on poor Falstaff while true love wins out, amid joyful song and dance.

The Rose Garden is a perfect setting to enjoy this production on a beautiful summer afternoon, with minimal props, a few small trees, a bench, two archways and a couple of fences (by set designer Jim Youngerman).  Read the play or check out a plot summary in advance in order to fully appreciate the work of this lively company of players.

THE MERRY WIVES OF WINDSOR runs from August 8—September 1.  Tickets may be purchased online at shakespeare.org or call 413-637-3353.