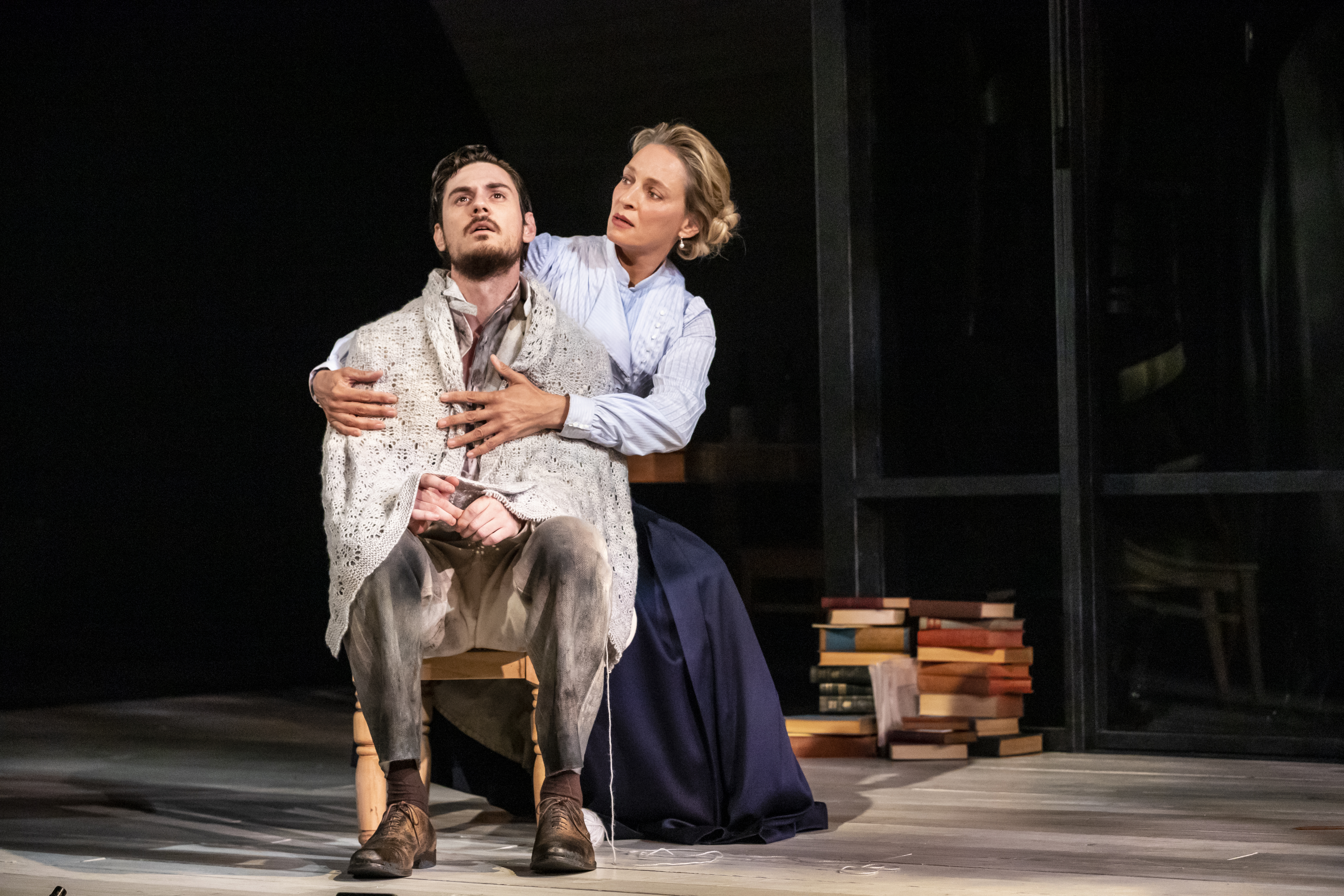 Henrik Ibsen (1828-1906), often referred to as the father of realism in modern theater, created a body of work that unflinchingly examined social mores (including marital roles), hypocrisy, religion, and ethics. In his day, theatergoers found themselves shocked and scandalized by the subject matter he explored as he continued to create what he termed the “drama of ideas.”

Now the Williamstown Theatre Festival is offering a laudable production (originally commissioned by the American Conservatory Theater in San Francisco) of what may have been Ibsen’s most scandalous play, Ghosts, in a new translation by Paul Walsh. First performed in Chicago by a Danish troupe in 1882, we can easily imagine how the play, with its exploration of religious hypocrisy, syphilis, incest, and euthanasia, ignited shock and controversy. As the esteemed scholar, critic, and playwright Maurice Valency wrote in his book, The Flower and the Castle: An Introduction to Modern Drama,  “Regular tragedy dealt mainly with the unhappy consequences of breaking the moral code. Ghosts, on the contrary, deals with the consequences of not breaking it.”

In her country estate near a great fjord in western Norway, Mrs. Helene Alving (Uma Thurman) welcomes her painter son Oswald (a dynamic Tom Pecinka) home after an extended stay abroad. We soon learn that Mrs. Alving had sent her son abroad in an attempt to protect him from being corrupted by his late father. Mrs. Alving, who felt trapped by the mores of her time, stayed in her marriage to an unrepentantly unfaithful husband. In an attempt to further protect Oswald, she has donated her inheritance to the building of an orphanage. She doesn’t want her son tainted by his father’s money, and she believes that using the money to fund the orphanage is a redemptive act. Family friend and advisor Pastor Manders (a perfectly dogmatic Bernard White), who had directed Mrs. Alving to remain with her husband despite her misery, is happily overseeing the project.

Oswald, ill and behaving erratically, is besotted with Regina, the family maid (a delicate yet strong-willed Catherine Combs), and his mother must find a way to separate them to avoid another ghastly inheritance. Mrs. Alving is regularly confronted with the unsavory man Regina believes to be her father, Jakob Engstrand (a cleverly duplicitous Thom Sesma), whom Regina refuses to see.

Uma Thurman’s nuanced portrayal of the tortured Mrs. Alving was a revelation to me. Often when celebrities known for their filmwork make the transition to the stage, the outcome is disappointing. Most movie actors lack the training and understanding of the differences between performing on film and on stage, and I anticipated being underwhelmed by Thurman’s performance. But her performance was luminous, solid, and sensitive, and she expertly embodied Mrs. Alving. Carey Perloff, who clearly grasps the significance of Ibsen’s play, skillfully selected and directed an excellent cast. I found myself emotionally exhausted at the end of this deeply disturbing drama; I’d been hanging on to their every word.

Well, almost every word. Mr Walsh’s translation occasionally veered into contemporary American vernacular: “Don’t try that crap on me” made me cringe (although I did research the evolution of the word “crap,” and learned that it became a synonym for “excrement” around 1898; Ghosts was written in 1881), and multiple references by Pastor Manders to a “higher power” rather than “God” seemed downright peculiar.

Composer David Coulter’s incidental music was a bit too ghostly for my taste. I don’t know whether Beth Lake’s sound design could have ameliorated what I perceive to be a problem. The eerie sounds begin suddenly and loudly, over-punctuating foreboding revelations and developments.

Dane Laffrey’s costumes were beautifully designed and did a fine job of underscoring each character’s personality and social status. Laffrey also designed the handsome set, and although I must admit that when I caught a gander of the imposing, diagonal thatched roof that framed it, I was expecting to find it distracting. I’m pleased to report that it worked exceedingly well, not only complementing the country setting, but enhancing the naturalism of the play, and serving as a subtle reminder of the inherent fragility of what we believe protects us.

James F. Ingalls’s lighting design was as crucial to the play as any character, and it was masterfully interwoven with the action onstage. One scene was less than satisfying for me: A fire erupts outside as the actors rush outside to tend to it, but I felt little if any sense of urgency, and the reflections of the blaze didn’t seem any more real than the actors’ responses to it.

On the whole, this production of Ghosts, with its exceedingly talented cast, is well worth seeing, and I recommend it without reservation.