REVIEW: “Nunsense” at the Sharon Playhouse 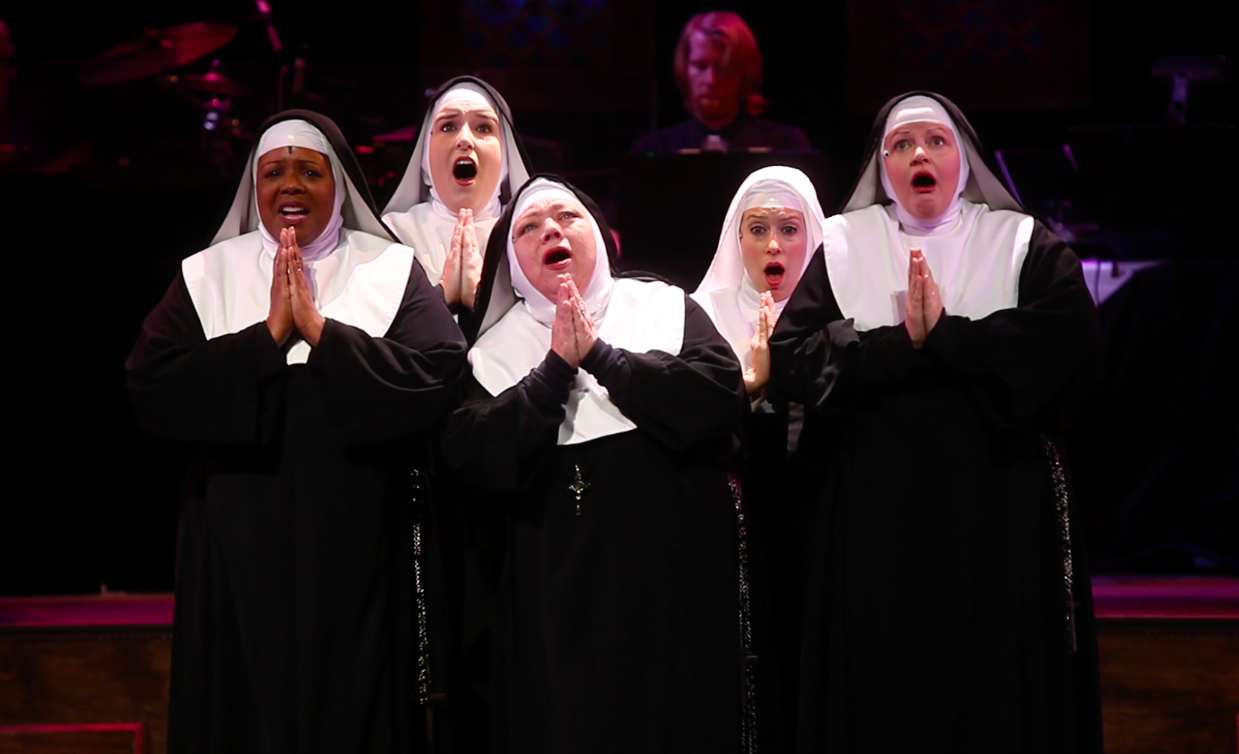 REVIEW: “Nunsense” at the Sharon Playhouse

Dan Goggin’s Nunsense is a theatre institution.  After debuting in 1985 and becoming the second longest running off-Broadway show (The Fantasticks being first) it has produced six sequels, the last Nunset Boulevard in 2009, and three spin-offs.  A swarm of actresses including Edie Adams, Kaye Ballard, Rue McClanahan and Sally Struthers have toured the show or appeared in a television version.  For almost thirty-five years it has been fodder for community and summer stock theatres.  It is now at Sharon Playhouse to close the summer season in a joyous romp.

Five of the nineteen surviving Little Sisters of Hoboken have learned that their cook, Sister Julia, accidentally killed fifty-two residents of the convent with botulism-laden vichyssoise. Able to bury only forty-eight of the victims, the other four have been stored in the freezer until money can be raised to inter them.  To achieve this they decide to put on a show in the convent’s auditorium.  Mother Superior Sister Mary Regina (Mary Stout) greets the audience and the other four nuns introduce themselves with the song “Nunsense is Habit-Forming” which gives you an idea of the tongue-in-cheek spirit of the show.  What follows is all in good fun.

In addition to eighteen songs, personal situations are revealed as each nun has her place in the spotlight.  Sister Mary Leo (Krista Kurtzberg) sings and dances about her aspirations to be the first ballet-nun in “Turn Up the Spotlight.”  “So You Want to be a Nun” is a duet with Sister Mary Amnesia (Jeanne Tinker) and an off-color spouting puppet. Sisters Mary Regina and Mary Hubert sing “Just a Coupl’a Sisters” declaring they have to work together in critical moments. All of the numbers but one, “I Just Want to be a Star” sung by Sister Robert Anne (Kimberly Chesser,) are kitschy.

The cast obviously enjoys bantering with one another as they prance and dance around the stage.  Stout’s Mother Superior is the central character, if there is one.  When reprimanding her charges she usually has either a slight smile or flashing eyes or both along with an endearing personality which, actually, describes all the nuns.  Sister Mary Amnesia is adorable as played by Ms. Tinker with a giggle that testifies to her innocence and her loss of memory.  The most empathetic character is Sister Robert Anne who always seems to be in second place; she is the understudy in the nuns’ play but does not receive the opportunity to perform.  Sister Mary Leo, a former dancer, is a novitiate who retains her secular exuberance especially in “Benedicite.”

“Holier than Thou,” a gospel number led by Sister Mary Hubert displays an ebullience the character has up till then restrained.

Directed and choreographed by Teri Gibson the show moves at a swift pace though the script’s opening expository moments are a bit slow.  She has provided the performers the flexibility to do some improvising as in a quiz of the audience by Mary Amnesia.  The dances are facile as they have to do them, especially a tap number, in their habits; not an easy task.

Eric Thomas Johnson’s three piece band is onstage, he being Father Eric when the nuns address him.  The accompaniment is well-modulated by sound designer Graham Stone so that the music does not overpower the singers.  Jamie Roderick’s light design is bright, complementing the nature of the show, with occasional atmospheric lighting depending on the song.

The show does not proselytize nor preach; there is an ecumenical moment when the nuns receive a good luck bouquet from a nearby synagogue.  It is intended to be an entertaining evening in the theatre.  Sharon’s production is certainly that.  Go and have a good time!

The Sharon Playhouse is located at Performances Thursdays at 2pm & 8pm; Fridays at 8pm; Saturdays at 2pm & 8pm; and Sundays at 3pm. Tickets $20-45. The Box Office is open six days a week during the summer and online anytime Call the Administrative office (860) 364-7469(ext. 200) https://www.sharonplayhouse.org/