REVIEW: “The Chalk Garden” at the Ghent Playhouse 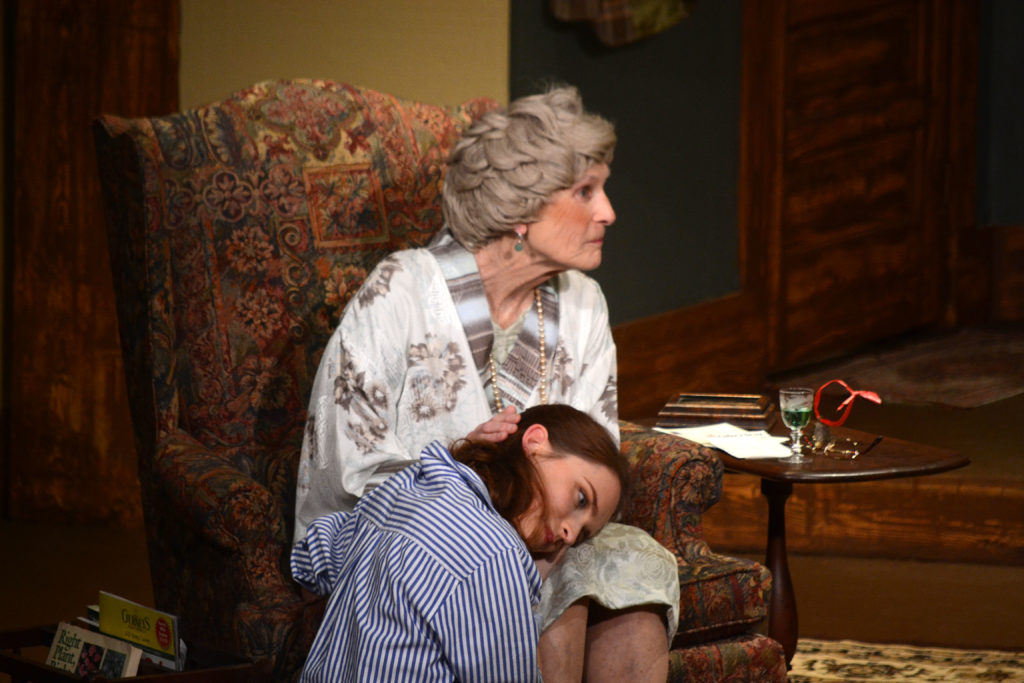 REVIEW: “The Chalk Garden” at the Ghent Playhouse

Every generation, it seems, must have its “Chalk Garden.” Major revivals pop up every decade or so like crocuses sprouting in spring. And then there’s the popularity the 1955 Enid Bagnold play enjoys in regional theater, perhaps owing to its meaty dialogue and eccentric characters.

Is it any wonder that the Ghent Playhouse’s new production of “The Chalk Garden,” under the direction of artistic director Cathy Lee-Visscher, took an exceedingly dark tone with this British dramedy? That’s about right for this #MeToo generation. But it’s a pity that some of Bagnold’s wit and satire couldn’t shine through more.

In actuality, “The Chalk Garden,” for all its actorly chops, fits awkwardly against contemporary America—both more relevant than ever and oddly disconnected—hailing from a time of nascent feminism in England weighted down by postwar norms and still viewing liberated women as upstarts and eccentrics. (Trigger warnings and spoilers ahead.)

The story revolves around a triangle of “troubled” women: Mrs. St. Maugham (Wendy Spielmann), who tends her country estate garden and looks after her granddaughter, Laurel (Elisheva Malfatto); and a mysterious governess, Miss Madrigal (Sally McCarthy), who answers an ad to take care of the teenager.

Each of them bears a kind of moral burden, though an ambiguous one: Mrs. St. Maugham may have driven away her daughter, Laurel’s mother Olivia (Lee-Visscher); Miss Madrigal may have murdered a stepsister; and Laurel may have been “violated” (Bagnold’s explicit term) as a preteen.

The heart of the drama turns on the question most often associated with #MeToo: whom do you believe? In 1955 England, the answers are complicated by other questions regarding women’s ability to distinguish truth from fiction and whether anyone can see through to their “true” natures.

Also hovering around for the unfolding events are Maitland (Steve King), a reluctant servant; an unseen, unwell butler living upstairs, named Pinkbell, who represents something like the old order; his nurse (Jewel Winant); and “The Judge” (George Filieau), a friend of Mrs. St. Maugham’s whose arrival for a visit sparks an unraveling of stories.

The Chalk Garden, incidentally, is a literal description of the estate’s garden, where the soil is limestone and everything planted by Mrs. St. Maugham, with advice from the unseen butler, dies. You would be hard-pressed to overlook the metaphorical meaning, just as Miss Madrigal’s healing touch with the garden symbolizes this play’s belief in second chances.

There was ample ramping up of tension as the third act’s confrontation between The Judge and Miss Madrigal drew near, and some riveting mother-daughter showdowns between Olivia and Mrs. St. Maugham, courtesy of some excellent acting by Lee-Visscher and Spielmann.

What was missing from this production of “The Chalk Garden” was the sense of hope and possibility, not to mention just plain carpe diem zaniness hidden underneath each character like a seed needing watering. The actor who came closest was Malfatto, the youngest, who imbued Laurel with a mischievous sparkle. Spielmann had moments of inspired battiness as called for by Mrs. St. Maugham’s character.

Unfortunately, as Miss Madrigal, the heart and soul of the play, McCarthy sustained an overly angry and emotional demeanor—though as I said at the outset, as a directorial choice it may not be entirely inappropriate to our time. It was also difficult to draw a bead on King’s Maitland; he too seemed alternately angry and confused. Filieau was fine as The Judge, if a little stiff, and Winant serviceable as the nurse in a part that is admittedly marginal.

Part of me feels like it’s time to retire old chestnuts like “The Chalk Garden,” and yet as long as there are literary and challenging plays like it, they will forever grow again in half-decent soil.