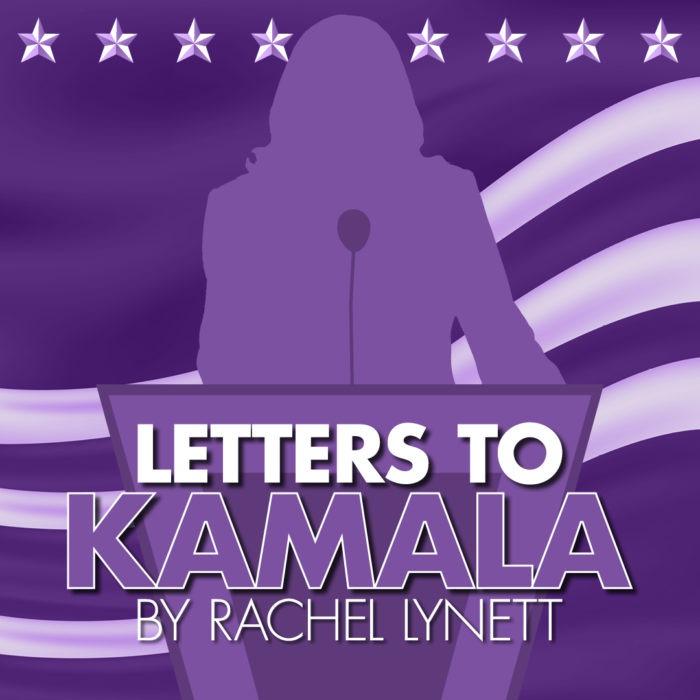 LENOX, MA (March 2, 2021) — WAM Theatre begins its 12th  season with an Online Fresh Takes Play Reading of  LETTERS TO KAMALA by Rachel Lynett, directed by Nicole Brewer, which will be available to stream from Sunday, March 14 to Sunday, March 21. Tickets are on sale now.

In the tense lead up to the 2020 presidential election, playwright Rachel Lynett conjures three female American political leaders of the past to share their wisdom, perspective, and wry humor with VP candidate Kamala Harris.

Playwright Rachel Lynett explained that following Harris’s nomination for Vice President: “I wanted to write a play that explored pride mixed in with caution, a play that questioned our cultural obsession with firsts but also made room for understanding the weight that being “first” carries. Who were the other firsts? What sacrifices did they have to make to get there and what can we ultimately never compromise on?”

Director Nicole Brewer echoed this sentiment saying: “”VP Harris has an impressive record filled with many firsts and what I appreciate about Lynett’s play is the central question of success at what cost and where does she go from here?”

Missing from our history books, our current Vice President is challenged and cheered on by three powerful women on whose shoulders she stands: Charlotta Bass (Shannon Lamb), the first Black woman candidate for vice president, Charlene Mitchell (Torie Wiggins), the first Black woman to run for president, and Patsy Matsu Takemoto Mink (Lilli Hokama), the first woman of color to be elected to the House of Representatives, first Asian-American woman to run in Congress and the first Asian-American to run for president.

All three actors are making their WAM debut. Lilli Hokama, who Berkshire audiences may remember from I and You at Chester Theatre, will be playing Patsy Matsu Takemoto Mink. Lilli has appeared in The Wolves at Lincoln Center Theatre, Little Women at the Dallas Theatre Center, and Amadeus at the Folger Theatre, where she will be returning post-pandemic to appear in A Midsummer Night’s Dream. Shannon Lamb, who will be playing Charlotta Bass, has performed as an actor and singer on stages across the country, from Arkansas Repertory Theatre to the Huntington Theatre in Boston. She sang the National Anthem at Madison Square Garden and played various roles in The Dave Chappelle Show on Comedy Central. And Torie Wiggins, who is playing Charlene Mitchell, is an actor, director, voiceover artist, playwright and professor. In addition to performing on many regional theatre stages,  she has co-adapted and performed a one-woman show, Your Negro Tour Guide, at various venues across the country.

The next Online Fresh Takes Play Reading of THE LIGHT by Loy A. Webb, directed by Colette Robert, will be available for streaming April 25-May 2. A surprise proposal gift puts the future of Genesis and Rashad’s relationship at risk when they are forced to confront a devastating secret from the past. The Light is a 70-minute, real-time rollercoaster ride of laughter, romance, and despair that uncovers how the power of radical love can be a healing beacon of light.

Tickets for LETTERS TO KAMALA and THE LIGHT are on sale now. Audiences can book a ticket to the virtual readings and view anytime during the week. WAM aims to make both readings as accessible as possible, while maintaining our commitment to providing artists opportunities that are equitable. Therefore, we invite patrons to pick their own ticket price, ranging from $15-$50. For more information or to reserve your tickets today, visit WAM online at wamtheatre.com or call 413.274.8122.

For tickets and more information about the 2021 Season and WAM Theatre’s programs, events, and artists, please visit www.WAMTheatre.com.

For more information about the 2021 Season and WAM Theatre’s programs, events, and artists, please visit www.WAMTheatre.com.

Consciousness that makes a life Community Engagement/Activist work:  Facilitator of Anti-Racist Theatre trainings, Membership/Affiliations:  artEquity Facilitator Alum, Freelance Artist Resource Producing Collective Awards/proudest achievements: I’m most proud of being a caregiver to some extraordinary children. Final word: What comes next is up to us…I’m encouraged that this time we may get it right. Connect: nicolembrewer.com IG: @antiracisttheatre FB: Conscientious Theatre Training

Lilli Hokama (she/her) is an Asian American actress from Colorado who is thrilled to be making her WAM debut as Patsy Matsu Takemoto Mink in Letters to Kamala. Selected Theatre Credits: The Wolves (Lincoln Center Theatre), Little Women (Dallas Theatre Center, The Old Globe) Amadeus (Folger Theatre), I and You and Now Circa Then (Chester Theatre), Matt and Ben (The Kitchen Theatre), Antigone (Baltimore Center Stage). TV credit: Prodigal Son. Coming Next: Depending upon the pandemic, she will hopefully be seen next at Folger Theatre in A Midsummer Night’s Dream. Creative inspiration: Lilli finds her inspiration in nature, through music, thoughtful conversations and heady podcasts that seek to unravel the inner world while keeping a hand on the pulse of society. Membership/Affiliations: Actors Equity Association Selected training: Bachelor of Science in Theatre Performance and Associates in psychology from the University of Evansville Awards/proudest achievements: Lilli was nominated for a Berkshire award for her work in Now Circa Then. Final word: Lilli hopes to never stop learning, always seek progress, and practice living with grace, gratitude and courage. Connect: @_ill_lil_

Shannon Lamb (she/her) is an accomplished actor and singer who’s been blessed to perform on various stages across the country. Current role with WAM: Debut as Charlotta Bass in Letters to Kamala. Selected Theatre Credits:  Elizabeth Eckford in It Happened in Little Rock and Millie Wilkinson in Because of Winn Dixie at Arkansas Repertory Theatre (both world premieres), Temptation in Pandemonium at Cherry Lane Theatre, NYC (world premiere); Gloria in Building The Wall at Academy of Music (rolling world premiere); Rachel Twymon, Sr. in Common Ground Revisited at Huntington Theatre; Maydee in Jar The Floor, Nella in Gee’s Bend, Mrs. Cory in Mary Poppins and Joanie in The Full Monty at Arkansas Repertory Theatre; Brenda in Smokey Joes Café, Ronnette in Little Shop of Horrors, and Mrs. Hannigan in Annie at Murray’s Dinner Playhouse. Selected Television and Film credits: Jeanie in Mighty Real, (dir. Djola Branner); Various Roles in The Dave Chappelle Show (Comedy Central), Receptionist in This Revolution (dir. Stephen Marshall), Imani in The Empty Hand (dir. Steven Watkins) and Sister Clarissa in Fight Knights (dir. Kevin Ladson). Career highlights include: Singing the National Anthem at Madison Square Garden and appearing on the cover of American Theatre Magazine for her role in the world premiere of It Happened in Little Rock. Creative inspiration: God, my fine husband, and our children Membership/Affiliations: Actors Equity Association Final word: My heart’s desire is to daily be a Light, to spread Joy and Love.

Torie Wiggins (she/her) is an actor, director, voiceover artist, playwright and professor based in Cincinnati, Ohio. WAM Theatre: debut as Charlene Mitchell in Letters to Kamala. Selected theatre credits: She has co-adapted and performed a one woman show, Your Negro Tour Guide, at various venues across the country. Collapse, Afghan Women Writers Project, Bloody Bloody Andrew Jackson (Know Theatre of Cincinnati); The Mountaintop, Violet and His Eye is on The Sparrow (Ensemble Theatre Cincinnati); Twilight: Los Angeles 1992 by Anna Deveare Smith (Diogenes Theatre Co); Mame, and Crowns (Human Race Theatre Co.) and A Raisin in the Sun and Fences (Cincinnati Shakespeare Co.) She appeared in To Kill a Mockingbird with both Cincinnati Shakespeare Company and Cincinnati Playhouse in the Park. Film work includes: A Christmas Melody, starring and directed by Mariah Carey; The Old Man and the Gun with Robert Redford and Danny Glover. Directing credits: We Are Proud to Present…and Good Kids at Miami University, Dreamgirls and Proof at The Carnegie Theater, and Blues for an Alabama Sky at Falcon Theatre. Selected training: graduate of the University of Cincinnati (CCM) with a BFA in Dramatic Performance. She has over 20 hours of training in Intimacy Choreography and is a member of SAG-AFTRA and AEA. Creative inspiration: She is inspired to continue to root her work in uplifting BIPOC voices, and building her company, WellArts Cincinnati, which combines wellness in pursuing development in the arts. Final Word: “Those that don’t got it, can’t show it. Those that got it, can’t hide it.” – Zora Neale Hurston. Connect: www.toriewiggins.com

In fulfillment of its philanthropic mission, WAM donates a portion of the proceeds from their Mainstage productions to carefully selected beneficiaries. Since WAM’s founding in 2010, they have donated more than $80,000 to 19 local and global organizations taking action for gender equity in areas such as girls education, teen pregnancy prevention, sexual trafficking awareness, midwife training, and more.