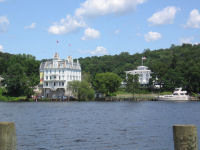 SOUTH PACIFIC DELAYED UNTIL THIS FALL AT THE GOODSPEED

GOODSPEED BY THE RIVER RETURNS WITH EXPANDED PROGRAMMING

EAST HADDAM, CT, March 24, 2021: Today, Goodspeed Musicals Artistic Director Donna Lynn Hilton and Managing Director David B. Byrd announced programming changes for the Tony Award-winning theater’s 2021 season. “Unfortunately, we will not able to get back into the theatre in June as we had originally planned.  Based on what we know now about the state of Connecticut reopening guidelines, the need for continued social distancing and the safety protocols required by the unions representing our artists, we will not be able to fully reopen indoors this summer.”  Mr. Byrd shared. “We are focused on ways to ensure that when we reopen, it will be as safe as possible for our audience, staff and performers” he added.

As a result, the much-anticipated production of Rodgers & Hammerstein’s South Pacific will be delayed and is projected to open in September.  The musical theater classic, based on James A. Michener’s Pulitzer Prize winning novel and featuring an extraordinary and irresistible score will be directed by Rob Ruggiero (Show Boat, Carousel, Oliver!). Performance dates for South Pacific to come. Anne of Green Gables will be moved to Goodspeed’s 2022 season.

The Goodspeed lawn will be bustling this summer under a big tent filled with several exciting events!    Programming details and a schedule of Goodspeed By the River events will be announced soon. “Imagine a warm summer evening outdoors at Goodspeed listening to show tunes and stories – old and new – and the joy of experiencing live performances and music once again” shared Ms. Hilton.

“We believe that performing outdoors will be the perfect bridge to getting all of us back into the theatre.  We will need to wait a little longer and use this time to have a glorious summer outdoors.  We hope you’ll join us.” she added.

Tickets will go on sale at a later date.

All current ticket holders will be contacted by email regarding their tickets and are asked not to call the Box Office due to very limited staffing. Due to the closures and reduced hours, tickets holders are asked to be patient as our staff attempts to contact everyone.

GOODSPEED MUSICALS has achieved international acclaim and is the first theatre in the nation to receive two Tony Awards for outstanding achievement in musical theatre. Under the leadership of Donna Lynn Hilton, Artistic Director and David B. Byrd, Managing Director, Goodspeed Musicals is dedicated to the celebration, development and advancement of musical theatre. Goodspeed creates powerful, world-class productions of enlightening new and established works to entertain and inspire audiences. From Goodspeed, 21 musicals have gone to Broadway (including Man of La Mancha, Annie and Shenandoah) and more than 90 new musicals have been launched.  Goodspeed’s Festival of New Musicals and the Johnny Mercer Writers Grove are distinguished cornerstones of the organization that highlight its commitment to nurture the talents of new and established artists and support the creative process. Goodspeed also maintains The Scherer Library of Musical Theatre and The Max Showalter Center for Education in Musical Theatre. Goodspeed gratefully acknowledges the support of its official audio sponsor, Sennheiser. The organization is supported in part by the National Endowment for the Arts and the Connecticut Department of Economic and Community Development, Office of the Arts