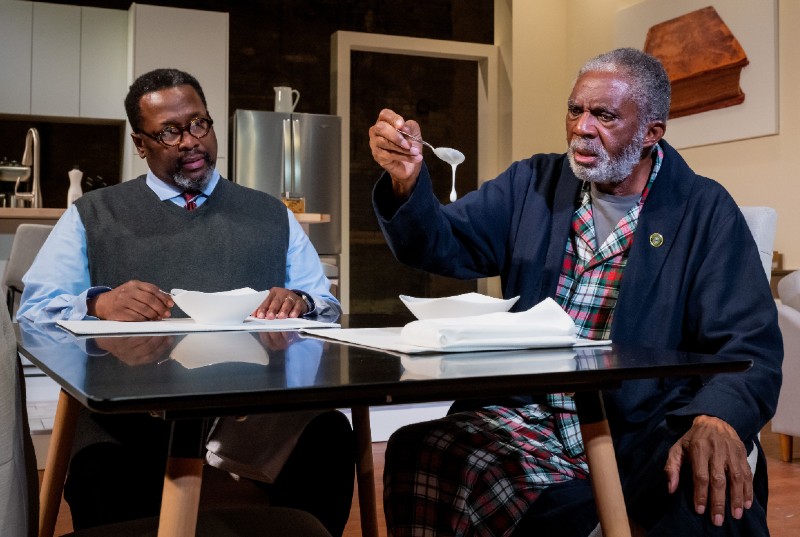 Great Barrington, Mass.—Berkshire Playwrights Lab (BPL) and the Mahaiwe Performing Arts Center will co-present a YouTube screening of James Anthony Tyler’s Some Old Black Man, starring Wendell Pierce and Charlie Robinson, on Saturday, April 24 at 3pm. The performance will be followed by a live conversation on YouTube with the actors, the playwright and director Joe Cacaci. The production is made available through the University Musical Society (UMS), in Ann Arbor, Mich.

Some Old Black Man was first produced by Berkshire Playwrights Lab in 2015 as a staged reading at the Mahaiwe. In 2017 BPL gave the play a full production at St. James Place, which was subsequently staged at 59E59 Theaters in New York City in 2018. The Guardian acclaimed the UMS-filmed version of the play as “a riveting drama, not only about all that is left unsaid in families, but also the intergenerational experiences of racism in America.” In another summary of the play, The New York Times called Wendell Pierce “one of the greatest actors of his generation.”

The play begins with an argument over what to eat for breakfast, then turns into a generational clash over race, opportunity, and a decision that Calvin made years ago. Donald’s grumpiness is peppered with disturbing outbursts, revealing bits of his past, informed by growing up Black and poor in the South. Donald believes that he isn’t seen by his gifted, accomplished son as being good enough, and Calvin resents Donald for being a self-righteous, relentlessly tough parent. Father-son strife escalates when their generational conflict is lensed through civil rights.“

This play bridges stage to screen with wonderful performances, wit, and family dilemmas that feel familiar and poignant,” says Mahaiwe Executive Director Janis Martinson. “We are pleased to bring Some Old Black Man back to Mahaiwe audiences in this beautifully-realized incarnation.”

“Some Old Black Man manages to be both timely and timeless, speaking with urgency and eloquence to how we live today,” say Berkshire Playwrights Lab Co-Artistic Directors Richard Dresser and Felicia Harden in a joint statement. “The adaptation to the screen of this intimate play is seamless and the performances are extraordinary. This not-to-be-missed work speaks to the very best of what we do at Berkshire Playwrights Lab.”

University Musical Society’s digital theater production is the first of its kind for this powerful work. The creative team quarantined and rehearsed in Ann Arbor for three weeks in fall 2020, subsequently filming in Detroit under strict coronavirus safety protocols.

The event is free but requires registration at either mahaiwe.org or berkshireplaywrightslab.org. Registrants will receive YouTube links for the play and post-show conversation.

About James Anthony Tyler, Co-Artistic Director, Berkshire Playwrights LabJames Anthony Tyler is the recipient of the 3rd Annual Horton Foote Playwriting Award and an inaugural playwright to receive a commission from Audible. His plays include Artney Jackson (World Premiere at Williamstown Theatre Festival, 2018 Edgerton Foundation New Play Award), Some Old Black Man (Berkshire Playwrights Lab at St. James Place and 59E59 Theaters), and Dolphins and Sharks (LAByrinth Theater Company and Finborough Theatre in London). He has an MFA in Film from Howard University and an MFA in Dramatic Writing from New York University. He is also a graduate of The Juilliard School’s Lila Acheson Wallace American Playwrights Program, and currently a staff writer for the new OWN Network show Cherish the Day created by Ava DuVernay.

About Joe Cacaci, Co-Artistic Director, Berkshire Playwrights Lab Joe Cacaci was the founding director of East Coast Arts, where he produced twenty world premiere plays over seven seasons, and the Producing Director, with Dan Lauria, of The Playwrights Kitchen Ensemble in L.A., where over 500 new plays were given staged readings. Joe co-produced David Mamet’s Obie-winning play Edmond at the Provincetown Playhouse. His own plays have been produced at The Public Theater and The Coconut Grove Theatre, where he also directed, and at The Long Wharf Theater and The Alley Theatre. He has also directed at The Westport Playhouse and commercially in New York and Los Angeles. Most recently he directed Wendie Malick and Gary Cole in Richard Dresser’s Closure (developed at BPL) at NJ Rep, Carol Schneider’s new play, Movements of the Soul (performed in ASL and spoken English) at BPAC in NYC, and James Anthony Tyler’s Some Old Black Man at Berkshire Playwrights Lab and 59E59 Theatre in New York City.

About Wendell Pierce Wendell Pierce has been in over 30 films, appeared in nearly 50 television shows, and has performed in dozens of stage productions. He had memorable long running roles in the HBO dramas The Wire and Treme. He currently co-stars with Jon Krazinsky in the Amazon series, Jack Ryan. He has performed on Broadway in The Piano Lesson, Serious Money, and The Boys of Winter. In 2019, Pierce starred as Willy Loman in the acclaimed Arthur Miller play, Death of a Salesman at the Young Vic Theater in London and its successful transfer to the West End. For this performance, he received a nomination for the Olivier Award for Best Actor. He is the host of the nationally syndicated, Peabody Award-winning radio program, Jazz at Lincoln Center.

About Charlie Robinson Charlie Robinson has appeared in multiple TV shows, best known for playing Mac Robinson in NBC’s Night Court (1984-1992). During the next three seasons, he co-starred on Love & War and appeared as Bud Harper in numerous episodes of Home Improvement. He plays the blind tenant in the series, Mom.Robinson is a lifetime member of the Actors Studio and among his credits is playing Willy Loman in the Arthur Miller play, Death of a Salesman at South Coast Rep, where he also appeared as Troy in August Wilson’s Fences. As a teenager, Charlie sang with the group Archie Bell & the Drells.

About Berkshire Playwrights Lab Berkshire Playwrights Lab occupies a unique position in the theater landscape, both locally in the Berkshires and nationally. For 15 years, BPL has been one of a few organizations in the country to focus solely on the development of new plays, and, consequently, on the development of new playwrights. A sharp focus on new talent and new ideas has given BPL expertise in finding adventurous thinkers and lively pockets of creativity in the theater community nationwide.