The Two of Us Productions Presents “The Lion in Winter” 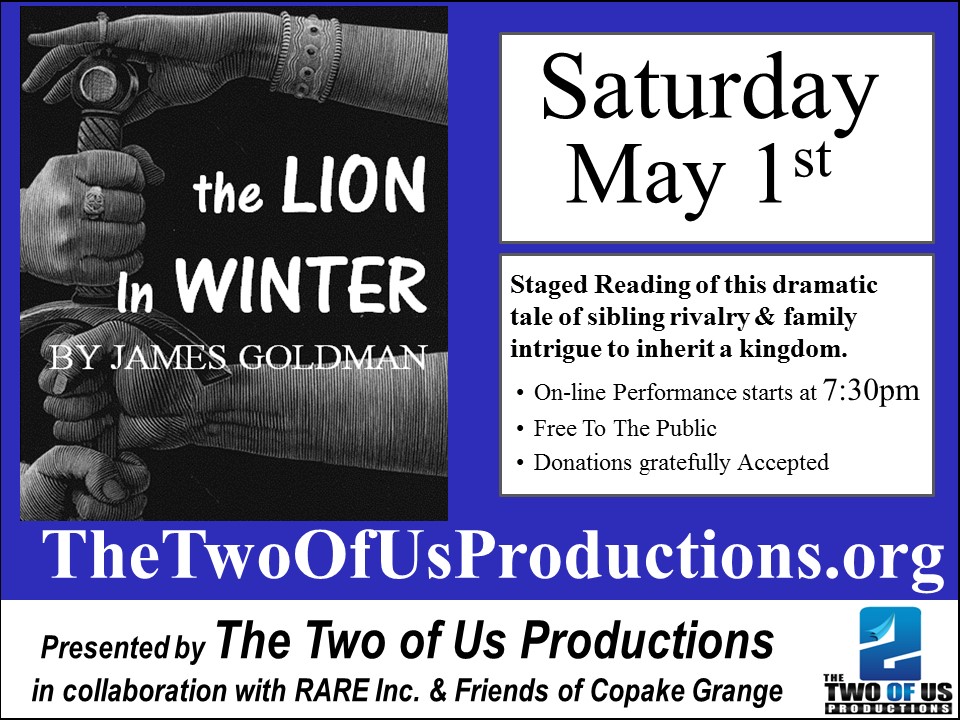 The Two of Us Productions Presents “The Lion in Winter”

The Two Of Us Productions is pleased to present The Lion In Winter by James Goldman on Saturday evening May 1, 2021, a Virtual Live-Staged Reading starting at 7:30 pm.

In a tale of sibling rivalry, intrigue, adultery, and dungeons, The Lion In Winter by James Goldman tells the story of the Plantagenet family locked in a free-for-all of competing ambitions to inherit a kingdom. The queen, and wealthiest woman in the world of 12th century Britain, Eleanor of Aquitaine, has been kept in prison since raising an army against her husband, King Henry II. The play delves into the inner conflicts of the royal family as they fight over both a kingdom and King Henry’s paramour, the French princess Alais Capet during the Christmas of 1183.

As Eleanor, who is let out of prison only for holidays, says, “Every family has its ups and downs,” and this royal family is no exception.

To learn the rest of the story you’ll have to RSVP to us at www.TheTwoOfUsProductions.org

The Lion In Winter will be performed as a virtual staged reading on Saturday May 1, 2021 at 7:30pm. This performance is free to the public, donations are gratefully accepted.

To RSVP for your reservation and zoom link, please visit www.TheTwoOfUsProductions.org or call 518-329-6293.

These performances are supported with funds from Hudson River Bank & Trust Foundation, Stewart’s Shops, Bank of Greene County, Rheinstrom Hill Community Foundation, and American Endowment Foundation. This project is also made possible with funds from the Decentralization Program, a regrant program of the New York State Council on the Arts with the support of Governor Andrew M. Cuomo and the New York State Legislature and administered in Columbia County by the Greene County Council on the Arts dba CREATE Council for Resources to Enrich the Arts, Technology & Education.