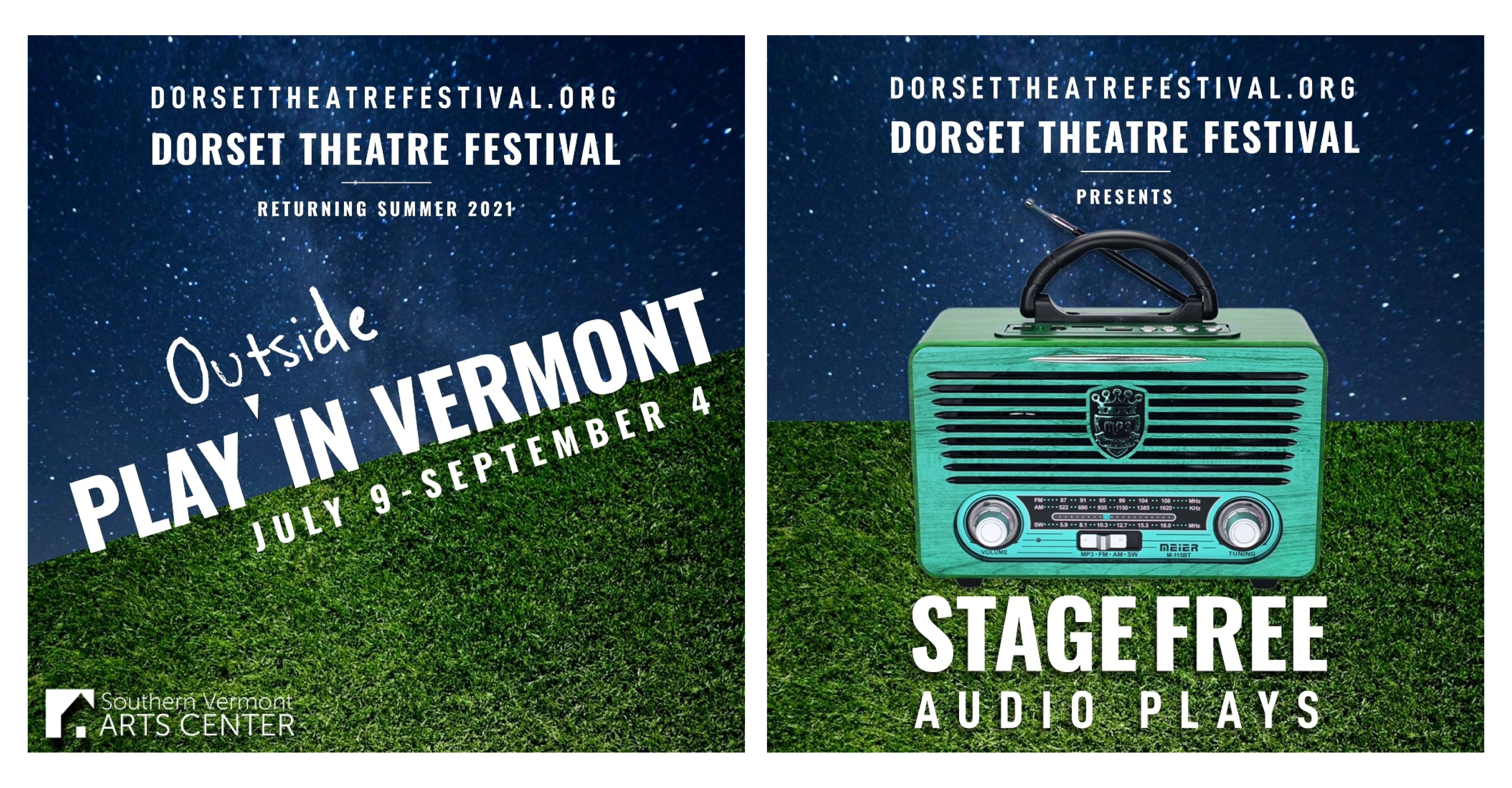 (Dorset, VT– May, 27 2021) Dorset Theatre Festival, under the leadership of Artistic Director Dina Janis, is proud to announce its 44th Season, including the inaugural StageFree Audio Plays series, featuring new commissions by playwrights Theresa Rebeck and Chisa Hutchinson, and live main stage performances at the Southern Vermont Arts Center in Manchester, VT of Christopher Durang’s Laughing Wild (July 9 – July 31); Queen of the Night, a world premiere by travis tate (August 10 – September 4); and a workshop of Scarecrow by Heidi Armbruster, as part of the Festival’s annual Pipeline Series of new work.

The 2021 comeback season will begin with StageFree Audio Plays, a new series written for a totally aural experience. The Festival has commissioned award-winning writers Theresa Rebeck and Chisa Hutchinson as the inaugural playwrights in the series. The first podcast, Redeemed by Chisa Hutchinson, will debut just before the beginning of the Festival’s live outdoor season at the Southern Vermont Arts Center in Manchester, VT.

The Festival is building an outdoor stage to be home to main stage productions set under the stars throughout July and August. “The Vermont landscape will be the theater’s backdrop this year, and the stage will be a truly open-air experience for both the audience and the artists,” said Dina Janis, artistic director.

The outdoor season will begin with the hilarious blast-from-the-1980s comedy Laughing Wild by Christopher Durang, whom the New Yorker called “one of the funniest men in the world.” The play, in three parts, stars a man and a woman struggling to cope with life in modern America. Over the course of two monologues and a chance meeting inside of a dream, the characters take on everything from the supermarket to nuclear waste to their own frenetic psyches. Directed by the Festival’s resident artist, Jade King Carroll, Laughing Wild will star Dan Butler (Frasier), who starred in the Festival’s 2019 hit Slow Food, and five-time Festival performer and 2020 Drama Desk Award-winner Mary Bacon.

Next will be the world premiere of Queen of the Night, written by travis tate, a queer, Black playwright, poet, and performer from Austin, Texas. In Queen of the Night, recently divorced Stephen and his millennial son, Ty, set out on a camping trip to their old stomping grounds in southeastern Texas. As an important family event approaches, father and son attempt to survive the woods, and one another, braving the bears and reckoning with the wilderness of their past. Despite low cell signals and high emotions, the two characters try their best to connect in this timely, illuminating, and entertaining play.

“travis’ play is an honest and poetic comedy about family. We are so proud that our audience will be the first to experience this funny and beautiful play in person,” said Janis. Dorset Theatre Festival, in partnership with Aye Defy in New York City, produced a week-long virtual workshop of the play earlier this spring. “It has been a hard year, but being able to work with travis on developing this play and now to produce a world premiere about a camping trip outside under the stars makes it seem like things are turning around,” Janis said.

In addition to the main stage productions, the Festival will host a two-week developmental residency of Scarecrow by Heidi Armbruster (Mrs. Christie, 2019), directed by Dina Janis, with matinee readings beginning July 14. Will the bulls chase her off the property or will she garden herself into oblivion? Scarecrow is one woman’s look back at the last 33 days of her father’s life. A New York City actress lands herself on her family’s dairy farm to grieve herself back to life. But can she ever make enough meatloaf to feel a sense of purpose again now that her most important person is no longer on the planet? A look at loss and survival, resilience and renewal, and Hallmark movies.

The Festival will offer on-demand streaming versions of both Main Stage plays, which will also be available as an option for patrons who are unable to reschedule if they miss a performance due to weather conditions.

Dorset’s season will also include special performances and talks for audiences to enjoy along with the amenities of the SVAC campus, including art galleries, walking trails, and the new curATE Café. “We are so excited to work together with all of our arts partners in the area, most especially Manchester Music Festival and our hosts, the Southern Vermont Arts Center, to build a lively and safe campus for our community to experience arts and culture all summer long,” said Janis.

Audiences will find things noticeably different this year, including a touchless and paperless box office, a digital playbill, social distancing, and required face masks. “We are braving a whole new world this season, literally creating a theater from the ground up. Pandemic, weather – lots of things are going to be new challenges, but we are excited and hope our audiences are excited to join us on this adventure,” said Janis.

In order to bring audiences together for live performances, Dorset Theatre Festival will be following guidelines from the Centers for Disease Control and the VT Department of Health, but in some cases they must also adhere to more strict guidelines set by professional artists’ unions.

“Safety will be the priority for our artists and staff, and for the audience,” according to Janis, who said the Festival has been working with Actors’ Equity Association and other artist unions to develop a safety plan. So far the Festival has been granted approval to begin rehearsals in June for the first live production of the year, Laughing Wild. “Everyday we are learning something new, or waiting for updated guidance,” said Janis, “but we believe in community, and if we can do so safely, there is an immediate need to bring our community together this summer.”

Tickets for the outdoor season are expected to be on sale in June at dorsettheatrefestival.org.

The outdoor main stage season is sponsored by Church Street Hospitality, a premier collection of Vermont inns, restaurants and celebration venues, including the brand new curATE Cafe at SVAC.

Debuting this June for free on all major podcast platforms, the StageFree Audio Plays series will build upon the Festival’s mission of supporting artists and making new plays available to wider audiences. Dorset commissioned playwrights Chisa Hutchinson and Theresa Rebeck to write the first two plays in the series. As the Festival’s resident playwright and “the most Broadway-produced female playwright of our time,” Rebeck has developed more than eight new plays with the Festival. In addition to currently writing for a new Showtime series, Hutchinson’s audio play, Proof of Love, was on Audible’s Top 5 Audio list.

In Redeemed, the convicted murderer who killed Claire Yiang’s brother nine years ago writes begging her to visit him in prison. When Claire arrives, the killer claims he’s a changed man –  thanks to the help of her brother’s ghost. Now she must decide whether her brother’s murderer is capable of redemption, or just attempting to impress the parole board. A riveting exploration of domestic terrorism, Redeemed is a chilling and surprising audio drama.

The second audio play of the series, Theresa Rebeck’s Nightwatch, a fictional true-crime podcast, will debut later in 2021.

Dorset’s StageFree Audio Plays are funded in part by the Venturous Theater Fund of the Tides Foundation.