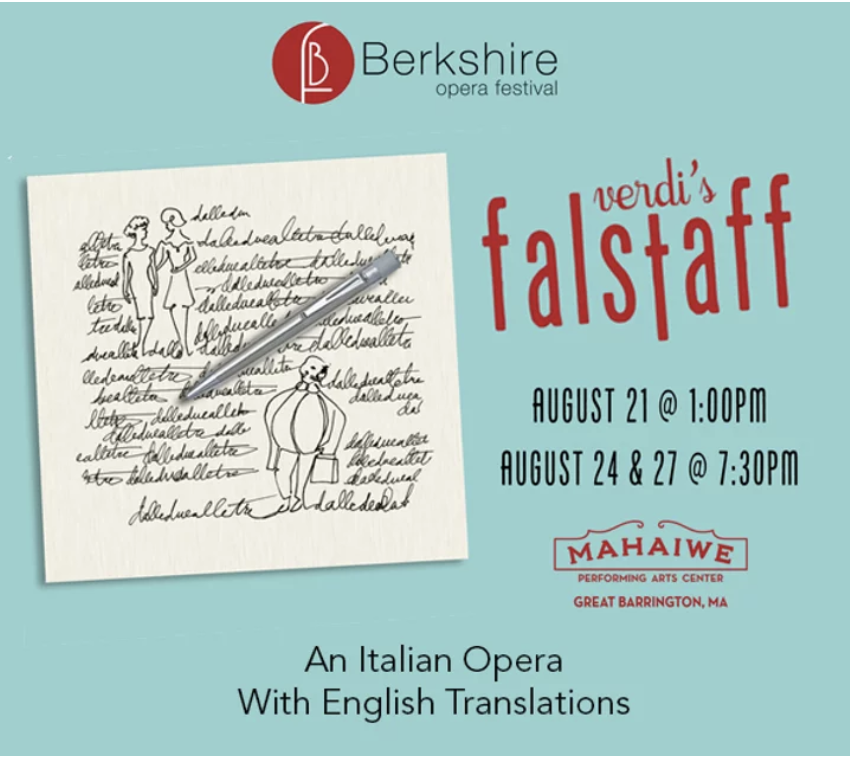 Berkshire Opera Festival‘s mainstage show will be Giuseppe Verdi‘s brilliant comic opera FALSTAFF, which was adapted by Arrigo Boito from Shakespeare’s The Merry Wives of Windsor and Henry IV. One of only two comedies written by Verdi, and his final opera (written when Verdi was almost 80 years old), Falstaff tells the story of Sir John Falstaff’s fruitless search for money by writing love letters to wealthy women.

Three performances take place at the Mahaiwe Performing Arts Center in Great Barrington. Toronto-born Joshua Major, Chair of Opera Studies at the New England Conservatory, stage directs. The internationally acclaimed cast will star Sebastian Catana, who returns to the BOF stage after a 3-year hiatus. One of the world’s most sought-after Verdi baritones, this marks Catana’s debut in the role of Falstaff. After his memorable performance in the title role of BOF’s Rigoletto in 2018, Opera News wrote “Catana, a Romanian baritone who has sung Schaunard and Valentin at the Met, has genuine Verdian amplitude and attack that few in the world today can match.” Seen and Heard International wrote that “his characterization of the hunchbacked court jester was shattering in its intensity.”

The cast also features renowned soprano Tamara Wilson as Alice Ford. With a voice described as a “veritable force of nature” (Chicago Tribune), she is the 2016 recipient of the prestigious Richard Tucker Award, and is gaining international recognition for her interpretations of Verdi. BOF Artistic Director and Co-Founder Brian Garman remarked, “I am absolutely thrilled that Tamara will be joining us for this production. Not only does she have one of the world’s greatest Verdian voices, she’s also a magnificent artist and musician.”

And featuring the Berkshire Opera Festival Orchestra and Chorus

A Note About Safety

The safety and comfort of its artists and patrons has always been a high priority for Berkshire Opera Festival, even more so during the COVID-19 pandemic. BOF continues to work closely with each venue to refine safety protocols for performances based on the most current CDC recommendations and industry best practices. All patrons attending BOF performances this summer will be expected to comply with certain audience safety protocols, including wearing masks while inside the theater. These protocols will be communicated to patrons in advance via email and posted to this page. All visitors entering Massachusetts are advised to refer to the latest travel advisories prior to entering into the state: www.mass.gov/info-details/covid-19-travel-advisory.

Berkshire Opera Festival (BOF) is a fully-producing summer festival founded by Jonathon Loy and Brian Garman which presented its first season in 2016. The mission of Berkshire Opera Festival is to entertain and enrich the lives of people of all ages and backgrounds throughout the Berkshire region by providing accessible and affordable performances of a broad range of operas with the highest artistic standards. Each summer, BOF presents musically and dramatically compelling operatic productions, in addition to recitals and other related musical events. Recent productions include Puccini’s Madama Butterfly, Strauss’s Ariadne auf Naxos, Verdi’s Rigoletto, and Donizetti’s Don Pasquale.