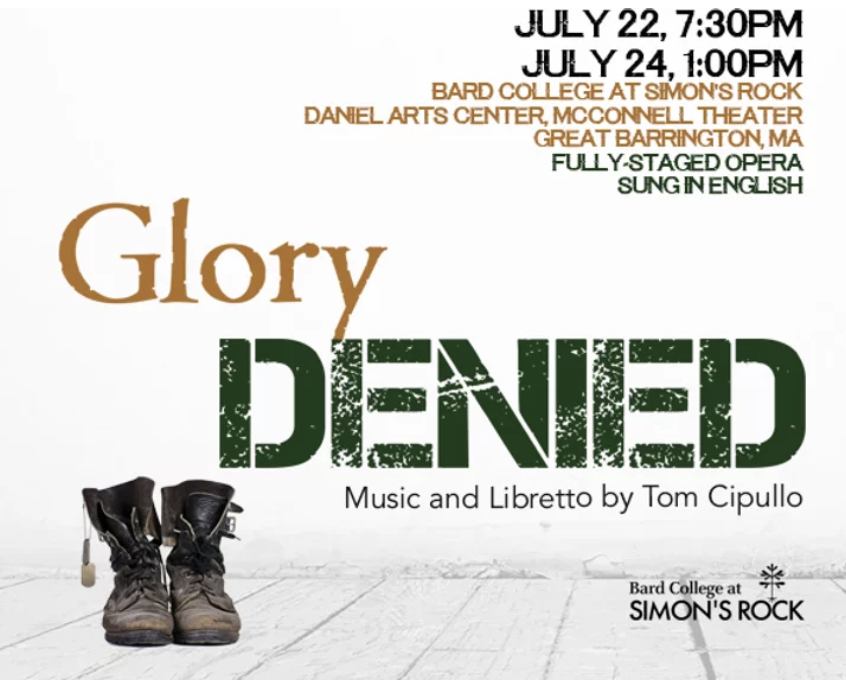 Berkshire Opera Festival mounts its inaugural second stage production: GLORY DENIED by 2012 Guggenheim Fellow Tom Cipullo. A two-act opera scored for four singers and sung in English, Glory Denied tells the true story of Colonel Jim Thompson, America’s longest-held prisoner of war, and is based on the eponymous book by journalist Tom Philpott. Written in 2007, this dynamic opera confronts Thompson’s difficulties during the Vietnam War, and those that followed him after his liberation. The opera has been described by Opera News as “intimate in its presentation…and epic in its scope and effect,” and has been produced more than 20 times to great critical acclaim.

This new production takes place at Bard College at Simon’s Rock – Daniel Arts Center, McConnell Theater in Great Barrington, MA. Geoffrey Larson, who has been with BOF as Assistant Conductor since 2017, conducts his first production with the Festival. Sarah Ina Meyers, a champion of contemporary opera who has been on the directing staff of the Metropolitan Opera since 2006, makes her BOF debut as stage director.

The cast stars the Grammy Award-winning baritone Daniel Belcher as Older Jim. Belcher was recently seen in Philip Glass’s Akhnaten at the Metropolitan Opera and came to international attention in creating the role of Prior Walter in Peter Eötvös’ Angels in America for the Théâtre du Châtelet in Paris, for which he was hailed by The Guardian as “possessing the kind of powerhouse stuff that indicates a star in the making.”

Berkshire Opera Festival will host approximately 20 veterans and their families from Soldier On in Pittsfield as their guests at the July 24 performance, courtesy of a grant from the Pittsfield Local Cultural Council. Soldier On is a nationally recognized non-profit organization that works in partnership with the Department of Veterans Affairs to provide a path to home ownership for our most at-risk veterans in an environment that offers dignity, integrity, and hope.

Tickets for Glory Denied are on sale now, and start at $20. All tickets must be purchased in advance prior to arriving at the McConnell theater; they will not be available for purchase at the theater. To purchase tickets, visit the MPAC website or call the MPAC Box Office at ( 413) 528-0100, Wednesday – Saturday, 12 PM to 4 PM.

A Note About Safety

The safety and comfort of its artists and patrons has always been a high priority for Berkshire Opera Festival, even more so during the COVID-19 pandemic. BOF continues to work closely with each venue to refine safety protocols for performances based on the most current CDC recommendations and industry best practices. All patrons attending BOF performances this summer will be expected to comply with certain audience safety protocols, including wearing masks while inside the theater. These protocols will be communicated to patrons in advance via email and posted to this page. All visitors entering Massachusetts are advised to refer to the latest travel advisories prior to entering into the state: www.mass.gov/info-details/covid-19-travel-advisory.

Berkshire Opera Festival (BOF) is a fully-producing summer festival founded by Jonathon Loy and Brian Garman which presented its first season in 2016. The mission of Berkshire Opera Festival is to entertain and enrich the lives of people of all ages and backgrounds throughout the Berkshire region by providing accessible and affordable performances of a broad range of operas with the highest artistic standards. Each summer, BOF presents musically and dramatically compelling operatic productions, in addition to recitals and other related musical events. Recent productions include Puccini’s Madama Butterfly, Strauss’s Ariadne auf Naxos, Verdi’s Rigoletto, and Donizetti’s Don Pasquale.