REVIEWS: “Who Could Ask for Anything More?” at Barrington Stage 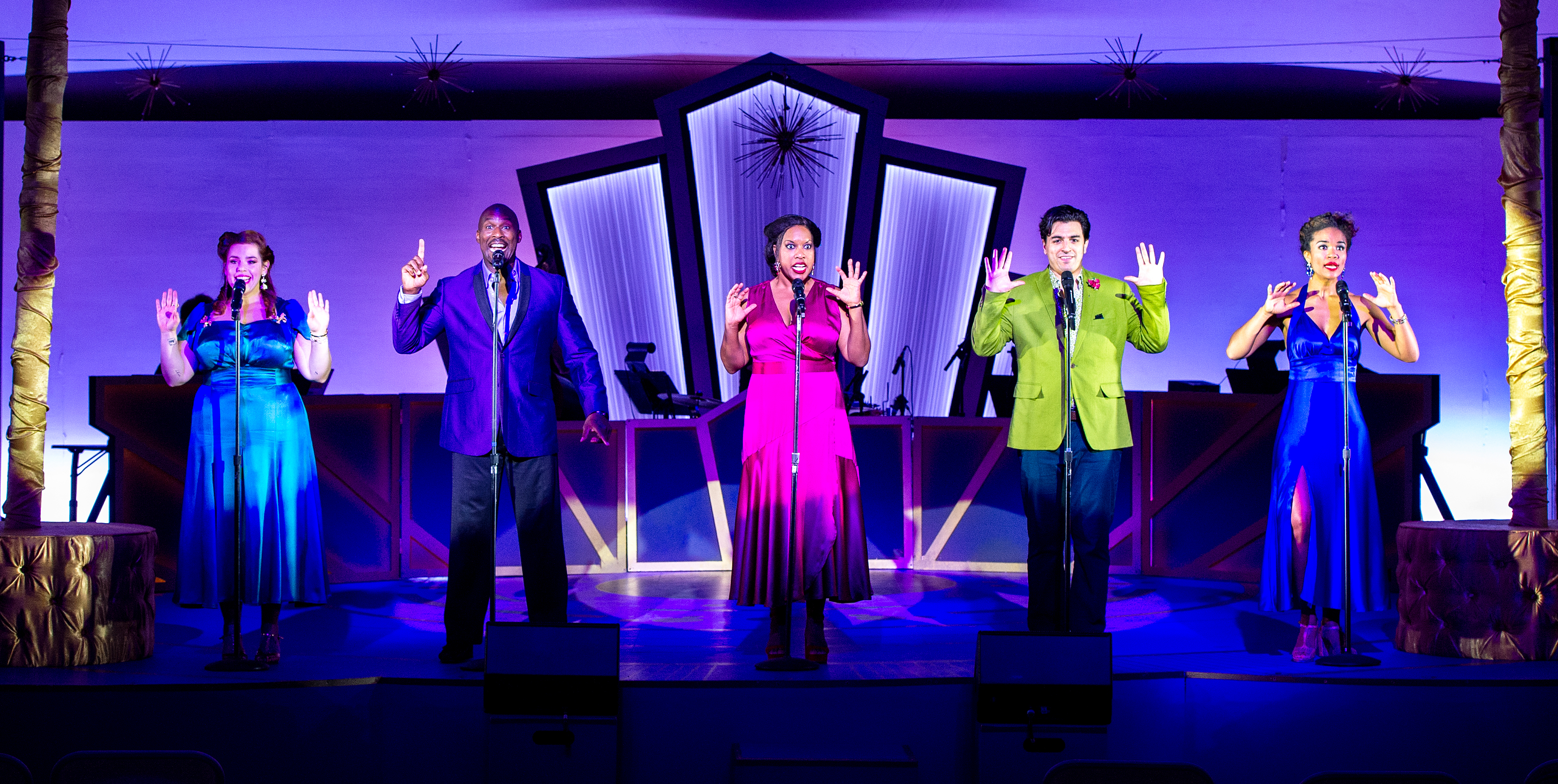 REVIEWS: “Who Could Ask for Anything More?” at Barrington Stage

What a joy it was to sit under a tent and anticipate a dazzling musical tribute to one of our most treasured composers. That we were masked and socially distanced and perhaps a bit chilly as the temperature dropped could not dampen the palpable excitement of a giddy audience yearning for theater.

As we waited for the celebration of George Gershwin’s music to begin, we gazed upon Lex Liang’s delightfully bold, evocative Art Deco set, which would shimmer throughout the show bathed in lighting designer David Lander’s vibrant colors. The rich accompaniment of the five-piece orchestra conducted by Darren R. Cohen enhanced the sensual feast that would be realized as the five exceptional singers appeared.

After a rousing orchestral rendition of Rhapsody in Blue, the slyly charismatic Alan H. Green appeared on stage, and from different entrances through the audience, Allison Blackwell, Britney Coleman, Jacob Tischler, and Alysha Umpress swept onto the stage as they sang Love is Sweeping the Country. As the five performers stood together in Sara Jean Tosetti’s striking jewel-toned costumes, I couldn’t help but note that despite the lovely colors, the costumes, particularly the women’s costumes, seemed unflattering or ill-fitting. This was a distraction. I loved that the performers were all different body types, and was relieved when they changed costumes about halfway through the show, still displaying sumptuous colors, but in much more flattering designs.

But let’s get to the heart of the show: Gershwin’s body of work, all the more remarkable when we’re reminded that George Gershwin died at the age of 38. The ensemble, individually and collectively, are astonishingly good, even magnificent at times, as with Allison Blackwell’s performance of Summertime. The selection of songs wisely represents Gershwin’s extraordinary range as well as the African-American and European Jewish influences on his compositions. I was disappointed that so many of the songs were delivered sardonically or with an over-the-top humorous interpretation that often seemed forced. I thought it a waste of the beautiful and gifted Britney Coleman’s silvery voice when she sang But Not For Me sarcastically. While it’s true that some of the lyrics are ironic, I think this particular song is written for a heartbroken woman who gently poked fun at herself through her heartbreak. The one time a bit of silliness did work for me was Alysha Umphress’s Do It Again. The song was written about sex, after all. Her all-out winkingly lascivious interpretation was very funny indeed, and she clearly was having as much fun as the audience.

I longed for more of a nod to George Gershwin’s most frequent lyricist, his brother Ira, although I was deeply touched toward the end of the show when the performers relayed a story of a postmortem tribute to George by Ira, the lyrics of a favorite song of mine…I don’t want to rob any potential audience members of the poignant experience of hearing the story and the song within the context of the show, so you’ll just have to wait and see it under the tent.

There is some outstanding choreography by Jeffrey L. Page, never more so than when executed by the astonishing Jacob Tischler. Truly, he is a remarkable dancer, at once graceful and outlandishly acrobatic.

Despite my complaints about some forced humor and a few ill-fitting costumes, I was completely bowled over by the production. It is a privilege to watch and hear such glorious singing by a cleverly assembled quintet of very different and very talented performers. Who could ask for anything more, especially as we ease our return to live theater?

Barrington Stage Company in Pittsfield has opened its summer season (Hallelujah!) with the aptly named George Gershwin revue Who Could Ask For Anything More?…. And who could?  The show has been conceived by Artistic Director Julianne Boyd and Music Director Darren R. Cohen

Gershwin is an icon of American music having written Broadway musicals, (Of Thee I Sing, the first musical to win a Pulitzer Prize,  Girl Crazy, Strike Up the Band) a folk opera (Porgy and Bess) and jazz symphonies (Rhapsody In Blue, An American In Paris) et al, that are still heard all over the world.  His work is a combination of Afro-American, Russian-Jewish and American jazz rhythms and tempos.  They speak, or sing, for and to the country’s populations.

The production glides through twenty-four songs from well-known shows as those mentioned above and lesser-known ones such as Lady, Be Good and Shall We Dance in addition to George White’s Scandals and The Goldwyn Follies. The cast of five, Allison Blackwell, Britney Coleman, Alan H. Green, Jacob Tischler and Alysha Umphress have splendid voices and make the stage glow.

The show is introduced by the polished and skillful five-piece band, under the direction of Mr. Cohen, who performs an abbreviated version of Rhapsody In Blue as an overture leading into Love Is Sweeping The Country from Of Thee I Sing, a satire on presidential politics produced in 1932.

The various numbers are performed by the entire cast or various combinations and solos.  Standout numbers include Ms. Blackwell’s  from Porgy and Bess whose operatic voice imbues the moving lyrics of Summertime with a stirring depth and wistfulness.  Also from Porgy and Bess is My Man’s Gone Now given a superb rendition by Mr. Green that resonates with an expression of deep grief which underscores Gershwin’s ability to plumb the depth of emotion as a contrast to his lighter popular show tunes.

From the little-known The French Doll Ms. Umphress offers Do It Again a more-than-somewhat suggestive song in an energetic, cleverly phrased performance while Ms. Coleman’s lovelorn rendering of The Man I Love from Strike Up The Band is very touching.  Though Mister Tischler is engaging, he sometimes adds extra business to Somebody Loves Me from George White’s Scandals so that the song’s pensive melody and lyric becomes very broad, weakening the composer’s intent.  This may be due to Mr. Cohen’s arrangement or the usually tasteful direction of Julianne Boyd.

The show is presented at Barrington’s Production Center, a new location several miles away from the main theatre (see map and image below).  Since this theatre is off the main street there is little ambient noise to disturb the show.  This is a huge tent seating a large audience of people socially distanced in folding chairs.  The stage is as large, or larger, as can be found in an indoor theatre.  Lex Liang‘s simple set upstage frames the on-stage band.  The lighting system is extensive effectively creating David Lander’s design.  It is obviously an immense project that has been undertaken by Ms. Boyd and her staff.  Kudos to their ingenious and well thought out response returning life to live theatre

Who Could Ask for Anything More? is a celebration of the enduring power of Mr. Gershwin’s talents  and musical theatre combined in a very entertaining production.

Who Could Ask for Anything More? The Songs of George Gershwin, at the Barrington Stage Company Production Center, 34 Laurel Street, Pittsfield, MA, runs from June 10 to July 10, 2021. Tickets range from $25 to $85. Seating begins 45 minutes before each show. Audience members are required to wear masks for the duration of the show. For more information on BSC’s 2021 season safety protocols, visit BarringtonStageCo.org/Safety. Running time: 75 minutes.

Who Could Ask for Anything More? ProgramDownload PDF of Program

WHO COULD ASK FOR ANYTHING MORE?

The Songs of George Gershwin