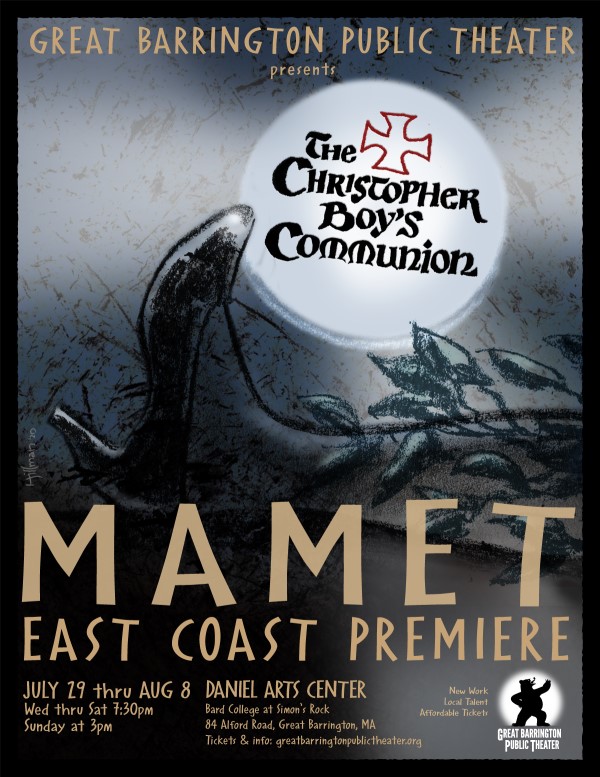 “..now, like everything in life, it’s time to pay the price.”

“ the question is not when, in truth did this or that occur, but what will free my son.

The play’s director and GB Public’s Artistic Director, Jim Frangione, says, ”I’ve known and worked with David for some time, and am thrilled that he chose us for the East Coast premiere of this new play. Mamet never forgets that the crux of storytelling is character, internal conflict, and dialogue. The Christopher Boy’s Communion addresses today’s questions about deep-rooted hatreds, the fault-lines in our justice systems, the abusive power of wealth, and the place and price of a human soul. As such, audiences should be forewarned: this play contains instances of language that convey prejudice and hatred. At the center of the story is the instinct to protect one’s own. It touches on themes David has grappled with many times over his career—persecution, prosecution, guilt, innocence, and absolution.

” …how do they exclude the evidence of the mutilation? Here’s how, “Your honor, I move the evidence be excluded.” “On what grounds?” “On the grounds, your honor, we both went to Fordham.”

The Christopher Boy’s Communion is on stage July 29-August 8, at the McConnell Theater, Daniel Arts Center, Bard College at Simon’s Rock, Great Barrington. Reservations for this premiere production are encouraged. Tickets and more information are available on the company website. GreatBarringtonPublicTheater.org.

David Mamet (Playwright) is the author of the plays The Anarchist, November, Boston Marriage, Faustus, Oleanna, Glengarry Glen Ross (1984 Pulitzer Prize andNew York Drama Critics Circle Award), American Buffalo, Race, The Old Neighborhood, Life in the Theatre, Speed-the-Plow, Edmond, Lakeboat, The Water Engine, The Woods, Sexual Perversity in Chicago, Reunion, and The Cryptogram (1995 Obie Award). His translations and adaptations include Faustus; Red River by Pierre Laville; and The Cherry Orchard, Three Sisters and Uncle Vanya by Anton Chekov. His films include The Postman Always Rings Twice, The Verdict, The Untouchables, House of Games (writer/director), Oleanna (writer/director), Homicide (writer/director), The Spanish Prisoner (writer/director), Heist (writer/director), Spartan (writer/director), and Redbelt (writer/director). Mamet is also the author of Warm and Cold, a book for children with drawings by Donald Sultan, and two other children’s books, Passover and The Duck and the Goat. His most recent books include True and False, Three Uses of the Knife, The Wicked Son, Bambi Vs. Godzilla, The Secret Knowledge, and the shoot-em-up novel of prohibition, Chicago.

Jim Frangione (Director). After more than ten years developing new plays with Berkshire Playwrights Lab, he is excited to be bringing a new Mamet play[3]  to the Berkshires with Great Barrington Public Theater. He directed Anne Undeland’s acclaimed new play Lady Randy, at the Elayne P. Bernstein Theatre at Shakespeare & Company in Lenox; David Mamet’s Romance at Wellfleet Harbor Actors Theater; Private Life at HERE Arts in NY; and An Evening of Shorts by Mamet, Pinter and Silverstein at the ART/Harvard Institute for Advanced Theatre Training. Jim’s play Breakwater, the second of his trilogy of Cape Cod plays, received its premiere in 2019 at the Daniel Arts Center at Simon’s Rock (Berkshire Theatre Critics Nomination) His play Flight of the Monarch, received its world premiere at Gloucester Stage Company in 2017. Jim has acted for over 35 years: Off-Broadway at the Orpheum Theater in the original production of Oleanna, as well as the National Tour; in many plays with the Atlantic Theater Company, on Broadway and at regional theaters such as The Mark Taper Forum, Long Wharf, Alley Theater, Berkshire Theatre Festival, Actors Theatre of Louisville—and most recently in David Mamet’s Prairie Du Chien at Atlantic and Vanya and Sonia and Masha and Spike at Shakespeare & Company. Jim’s film work includes Joy, Transamerica, Spartan, Heist, State and Main, The Spanish Prisoner, Homicide, Suits, Claire Dolan, and Maryam.

David Adkins is a NYC-based actor, teacher, and writer. This past winter he was proud to lead the cast of Truman Capote’s Holiday Memories at Berkshire Theatre Group into the first and only socially-distanced Equity production performed outdoors, in winter, and occasionally in rain, snow, sleet, and 13 degree temperatures! He has performed in warmer temperatures on and off-Broadway and in numerous resident theatres across the country, and he enjoys guest starring on television, most recently: Madame Secretary, The Black List, and Homeland. David is an Artistic Associate at BTG, having served as BTG’s Director of the Summer Acting Intern Program and having performed in over 35 productions there, including this summer’s run of The Importance of Being Earnest.

Nathan Hinton has performed at some of the most respected and emerging theater companies in the country. He began his professional career at Joseph Papp’s  Public Theater and in 2017 realized a personal dream by playing Zachariah in Athol Fugard’s Blood Knot at the Helen Hayes Award-winning Mosaic Theater Company in Washington, D.C., directed by Studio Theatre DC founder Joy Zinoman. Recently he played Memphis in Two Trains Running at Triad Stage and Jon in Marjorie Prime at Pittsburgh Public Theater.  In 2020, he appeared in the world premiere of Jeff Augustin’s Where the Mountain Meets the Sea at Actors Theatre of Louisville. He has played major and supporting roles at Shakespeare Theatre Company, Berkeley Repertory Theatre, Dallas Theatre Center and the Huntington Theatre Company, appearing in Nomathemba, a play with music written by Academy Award winner Eric Simonson and Joseph Shabalala of Ladysmith Black Mambazo. He was a member of the first national touring company of Angels in America, won the Barrymore Award for Excellence in Theatre as part of the cast of Richard Greenberg’s Take Me Out at Philadelphia Theatre Company, and received an Audelco Award nomination for Best Supporting Actor in Living in the Wind, at American Place Theatre. He is a member of Actors Equity, the Screen Actors Guild, and The Actors Center.

Mark “Monk” Schane-Lydon is a stage, film, commercial, and voice actor. NYS Health Department has used him recently to remind us all to get our COVID vaccine. Some of his favorite stage roles have been Thénardier in Les Misérables (Mac-Haydn Theater), Charlie in The Whale (Town Players), Lawrence Garfinkle in Other People’s Money (The Ghent), Mr. Peachum in Threepenny Opera (Bard College), Officer Lockstock in Urinetown (The Ghent), Walter in The Decorator (Theater Barn), and Robert in Proof (SLCA). He has been on stage all around the region from Saratoga to Egremont doing musicals, straight plays, and radio dramas; and is even known to be in drag at least once a year with the PantoLoons. For fun he restores vintage motorcycles; he also works and teaches at Bard College at Simon’s Rock. www.monksvoice.com

Keira Naughton directed Will Eno’s Title and Deed and Rachel Bond’s Curve of Departure at Chester Theatre Company (Berkie nomination for Best Direction of a Play in 2019) and the world premiere of Cedars by Erik Tarloff for Berkshire Theater Group. She has also directed at the 92nd Street Y Lyrics and Lyricists series. As an actor, Keira appeared on Broadway in The Rivals (Lincoln Center Theater), Dance of Death, and Three Sisters. Off-Broadway favorites include world premieres of Rolin Jones’ These Paper Bullets and The Jammer (Atlantic Theater Co.); Hunting and Gathering (Primary Stages); All My Sons (Roundabout); The American Clock (Signature). Regional credits include Gods of Comedy at McCarter/Old Globe; Company at the Kennedy Center Sondheim Celebration; plays at the Geffen Playhouse, Arena Stage, Huntington Theatre, Yale Rep, Westport Playhouse, Williamstown Theatre Fest, Berkshire Theatre Group, Barrington Stage, and Shakespeare & Co. (among others). TV and film credits include The Exorcist (Fox); Body of Proof; 3 LBS, Law & Order SVU; Sex and the City; All My Children, Cradle Will Rock and Blair Witch 2. She writes songs and sings with the band The Petersons. MFA in acting from NYU.

Kevin O’Rourke has performed on Broadway in Cat on a Hot Tin Roof, Spoils of War, and Alone Together, as well as The City of Conversation at Lincoln Center, Outside Mullingar at The White Heron, The Night Alive at John Drew, and productions at Manhattan Theatre Club, The Public, Second Stage, Playwrights Horizons, Arena Stage, Roundabout, Long Wharf, Primary Stages, and Williamstown Theatre Festival. At Barrington Stage Company, he appeared in Camping With Henry and Tom, Gaslight, Typhoid Mary, and the staged reading of Grant and Twain. He has appeared in numerous TV series, including Madam Secretary, Law and Order, The Sopranos, Outsiders, Elementary, and VEEP. Kevin won a SAG Award for his role as Edward Bader on Boardwalk Empire and was nominated for his starring role on the AMC series Remember Wenn. His film credits include The Irishman with Robert DiNiro and Al Pacino, American Pickle, Vice Versa, The Aviator, Tatoo, and Freehold. As a director, Kevin staged the NY premiere of Abi Morgan’s Tender at the Michael Weller Theatre, Jonathon Draxton’s Soldier at HERE Arts Center, and The Physicists at Williamstown Theatre Festival. In 2005 he founded the Williams College Summer Theatre Lab and for 10 years served as its Artistic Director. He and his wife live in Williamstown.

Diane Prusha is thrilled and excited to be returning to theater after COVID here at GBPT. She has been seen on many Berkshire Stages. Some favorite roles include Lotte in Enchanted April, Lotte in Lettuce and Lovage, and her roles in Edith Wharton adaptations, including Fullness of Life, Summer, Roman Fever, and many more. Another favorite was Hazel in The Children, for which she won a Berkie. The last time Diane appeared on this stage was with Karen Beaumont and students from Simon’s Rock in a production of Suddenly Last Summer. Theatre is Back!!!