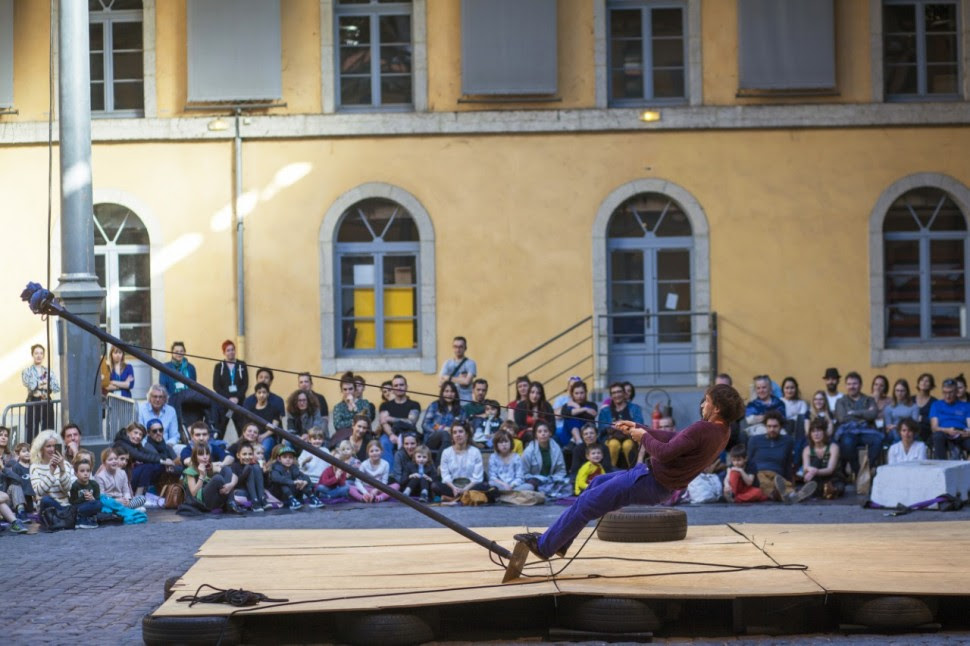 Following in the success of Cirque Barcode and Acting for Climate‘s free Crellin Park Day performance of Branché, circus arts continues as part of PS21‘s Pathways programming. Instable features Nicolas Fraiseau, an acrobatic everyman, who attempts to suspend a pole on an invisible wire. Aided by members of the French troupe Les Hommes Penchés, he climbs, loses his balance, falls, and resumes climbing, his struggle hovering between comedy and tragedy. The spectators respond with empathy as they recognize in Fraiseau’s precarious quest a mirror of our quotidian experience and that embracing the unexpected is essential to the human condition. And thus, the quester’s engagement of the audience creates life all around him.

Instable grew out of Fraiseau’s 2016 student project at the Centre National des Arts du Cirque (CNAC), where his performance, embodying elements of fragility, instability, and—finally—failure, impressed jury member Christophe Huysman, who invited the young acrobat to join Les Hommes Penchés and develop the work for the public. In 2018, he premiered Instable at the Académie Fratellini in La Plaine Saint-Denis and reprised it at the Seoul Street Arts Festival in South Korea the following year, before public performances were suspended due to the pandemic. This season, he is bringing Instable to American audiences for the first time, at PS21 on August 17 and 18, and in Pittsburgh under the aegis of the Pittsburgh Trust for Cultural Resources.

In addition, on August 12 and 13, Fraiseau and members of Les Hommes Penchés will lead circus workshops for aspiring young circus artists at PS21, including the participants in the Wooster Group Summer Institute.

The presentation of performances by Compagnie Les Hommes Penchés and Compagnie Galmae-Juhyung Lee [coming to PS21 in 2022] has been made possible through FACE Contemporary Theater, a program of FACE Foundation and Cultural Services of the French Embassy in the United States with support from the Florence Gould Foundation, The Ford Foundation, Institut français (Paris), the French Ministry of Culture, and private donors.

About Nicolas Fraiseau
Nicolas Fraiseau, born in 1995, discovered his passion for the Chinese pole and appetite for risk-taking at the Ecole nationale de cirque in Châtellerault. He completed his training at the Ecole nationale des arts du cirque in Rosny-sous-Bois (ENACR) and the Centre national des arts du cirque in Châlons-en-Champagne (CNAC), and joined the Compagnie Kiaï in 2015, where he performed in Cri, Kafka dans les villes, Bachar Mar Khalife’s Piano sur le fil, and La Main de la Mer. His gift for sharing moments of exhilaration and freedom through improvisation expressed in precise gestures have made Fraiseau a rising star in the circus world.

Read more about the work here.

In addition, on August 16 and 18, Fraiseau and members of Les Hommes Penchés will lead circus workshops for aspiring young circus artists at PS21. The workshops are open to children and teenagers 10 years old and up. Through play and improvisations, participants will experience physicality, the presence of others and the connection between each other. No theater or movement experience required!

About Pathways: Blazing Trails to a Sustainable Future

Branché by Cirque Barcode and Instable by Les Hommes Penchés are two highlights of PS21’s Pathways 2021, and two U.S. premieres of international productions we are able to bring to our community this summer.

Participatory workshops, community engagement and education, and performances again form the heart of PS21’s Pathways festival, our popular pas de deux between nature and the arts. Highlights of Pathways 2021 include circus arts, dramatic and dance performance, educational and environmental walks, and a new site-specific art installation, Solo Pavilion for Two or Three, by the Hudson Valley-based artist James Casebere. Pathways events are open to all and many events are free. Movement Without Borders runs from May through September.The Wooster Group Summer Institute, underway at our Dance Barn, is another community and educational standout of Pathways. PS21’s 100 acres of trails, open spaces, meadows, woodlands, and orchards that connect with Crellin Park remain a priceless resource for our artists and our community.