REVIEW: “She Loves Me” at the Mac-Haydn Theatre 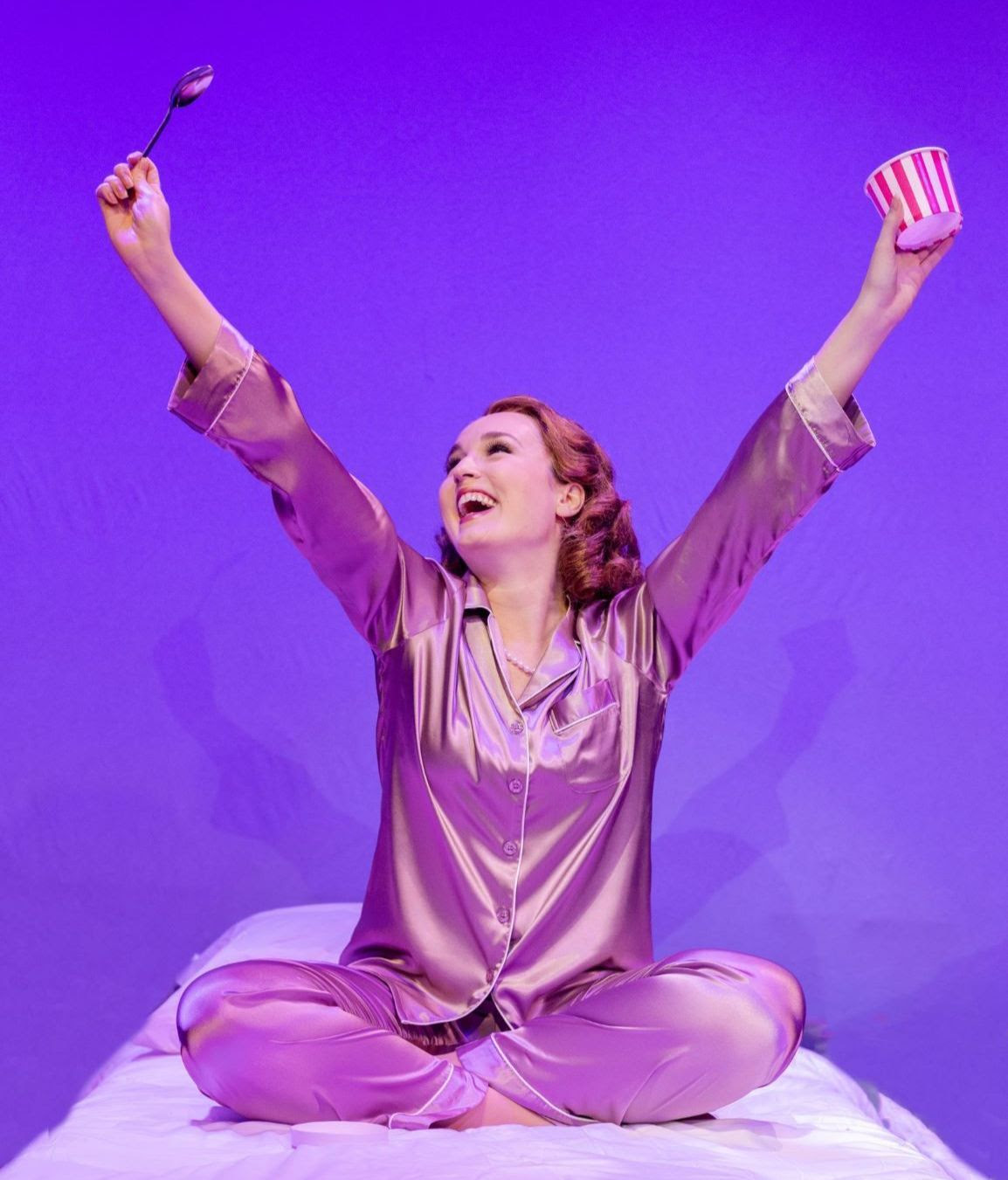 REVIEW: “She Loves Me” at the Mac-Haydn Theatre

I admit it. I have had a soft spot in my heart for “She Loves Me” since 1977, when I first listened to a cassette tape– yes, a cassette tape !– of the score. I was in a garret…all right, it was the attic dorm room of a college friend..and I was immediately smitten with the bright, light, ephemeral music composed by Jerry Bock, matched with Sheldon Harnick’s equally airy and lighthearted lyrics. There is something eternally endearing and appealing about this show, which opened on Broadway in 1964, and is considered by many to be the most charming musical ever written. After seeing the Mac-Haydn Theatre’s offering, I do not dispute that claim in the least.

In the seasoned and skillful hands of Artistic Producing Director John Saunders, this second production of the Mac-Haydn season positively oozes with all the charm,warmth and gentle wit anyone could want. Saunders gently and deftly coaxes bravura performances from an outstanding cast, all of whom have clearly fallen in love with their characters. On a hot, steamy summer night, it was sheer pleasure to sink into the world of a 1930s Old-World European parfumerie, where love is in the air…and in the mail. Competing against a thunderstorm that undoubtedly awakened the gods on Olympus, Friday night’s overture filled with swirling, prancing notes was the perfect precursor to the story to come. Music Director David Maglione conducts the score and tunes his musicians his usual deft hand, and as the overture concludes, we are transported to the elegant world of 1934 Budapest.

With a plot line as thin as the stationery two temporarily star-crossed lovers use to convey their feelings each to the other, “She Loves Me” is essentially a show about love, displayed in as many varieties as the scents and soaps offered by the love-seeking, love-struck, lovelorn (and, dare we say love-strewing, Mr Kodaly?) clerks of Maraczek’s Parfumerie. Love comes for the most part in pairs: two lovelorn, letter-writing pen pals at each other’s throats by day, in love on paper by night, The Cad and the Heart of Gold Deserving Better Gal, and what maybe can best be described by a Boy and His Idol, the older disillusioned by life and wife, the younger aspiring to advance and prove his worth. Each pair gets their turn in the spotlight, and the chance to make their choices.

Kelly Gabrielle Murphy is an effervescent, glowing, sometimes glowering, always endearing, Amalia Balash, With a pitch-perfect glorious soprano voice, she writes her letters to Dear Friend with the same sincerity and conviction that she uses to convince a store customer that her purchase of a musical box will persuade her that she needs “No More Candy.” Her delivery of “Vanilla Ice Cream” is nothing short of delicious, with sprinkles on top. as she comes to realize her pseudo-nemesis/archenemy George Nowack might not be so bad after all. The audience clearly appreciated her burgeoning moment of awakening enlightenment, as indicated by the applause following her joyous, palest-of-pink satin pajama-clad tribute to frozen deliciousness, and love.

As George Nowack, Amalia’s “Dear Friend” of lovelorn letter-writing fame and increasingly beleaguered and wrongfully suspected store clerk, Xander James arrives on the stage at the Mac in a most worthy debut. By turns earnest, grumpy, suspicious, nervous, concerned, and ultimately romantic, he delivers all the right notes at all the right times. He lithely and athletically sweeps us up into the countdown until “Tonight at 8” with increasing nervousness at meeting the pen pal with whom he is already clearly in love; unbeknownst to him the newly-hired thorn in his side Amalia has set her alarm for the same hour. Eventually the two discover their own feelings and identities, and James’s performance of the title song “She Loves Me” is a glorious recognition of that realization, with James channeling his inner Gene Kelly with his joyful leaps and bounds. His voice never faltered, never wavered, and only grew in confidence and strength along with George’s journey to finding the woman of his mail-delivered dreams.

As is almost compulsory for any good musical worth its romantic salt, Erin Spears Ledford and Andrew Burton Kelley provide the requisite (mostly) comic relief as “second fiddle couple” Ilona Ritter and Steven Kodaly. Ledford adeptly combines comedy with charm,and a certain poignancy, as Ilona finds herself increasingly disenchanted with her 2… 3…4 -timing, ne’er do well boyfriend and fellow store clerk Kodaly. . With a personal declaration of independence of “I resolve”, Ledford delivers a strong, strident, determined and perfectly clear message to the cad, and, again in the spirit of all good happy ending musicals, eventually discovers just how “educational” A Trip to the Library can be.

As a slimy, unctuous Lothario, Andrew Burton Kelley makes Kodaly almost as oily as the perfumes he proffers to the discerning ladies he waits on at Maraczek’s. He slithers and slips and oozes his way around the stage, nowhere more so than in “Ilona”, where his skillful vocal styling perfectly complements his choreographed moves.

Gabe Belyeu turns in yet another solid, well-played and believable performance as Mr. Maraczek. He is matched word for word and note for note with Anthony Velez as the aspiring, and surprisingly perspicacious for his age, bicycle riding delivery boy Arpad Laszlo. Belyeu’s nostalgic remembrance of “Days Gone by” is filled with sincerity and not just a little regret for the man and the life he used to know, while Velez nearly steals the show with his persuasive, boyishly-enthusiastic appeal to Maraczek to “Try Me” as the parfumerie’s newest clerk. These two characters are perhaps the most unlikely pair of the piece, yet with Belyeu’s and Velez’s portrayals, they are clearly meant to be together for the Student to learn from The Master, and for many a Christmas Eve dinner to come.

Fresh from his performance as the title character in “Pippin,” Kylan Ross deserves a hefty tip for his portrayal of the Waiter doing his flamboyant, over-the top best to preserve “A Romantic Atmosphere” in the cafe where Amalia waits, with increasing frustration and disappointment, for her Dear Friend to make himself known. With withering glances at the hapless Busboy Sam Saleznow, Ross makes it known in no uncertain terms, lyrically expressed, that his role is to provide cafe meant for quiet assignations, illicit meetings, and lovers’ trysts. Intrusions such as lonely hearts club letter writers seemingly being stood up, and the ear-piercing, atmosphere-shattering shrieks of the same, are simply NOT to be tolerated !

William Taitel as the”odd man out” among the assorted couples’ pairings gives a lovely supporting performance as Ladislav Sipos, the self-admitted coward clerk whose sole purpose in life SEEMS to be to keep the peace, to keep his job, and to essentially “fly under the radar” in hopes of maintaining his job and a happy homelife. Taitel brings a strong, rich, deep voice to sharing his “Perspective” on life with George.

Choreographer Ashley DeLane Burger turns a deft hand…and multiple feet…to the movement of the piece. Particularly noteworthy was her work in “12 Days to Christmas” , which begins almost as a sedate, contained, refined waltz, until finally degenerating to a frenetic, almost totally chaotic gavotte as December 24 draws nigh and shoppers reach their personal eleventh hour. Twirling, whirling and dashing about with precision and confidence on the extended but still relatively limited stage, the entire company never missed a beat,

Costumes designed by Bethany Marx are stylish, and period-perfect, soft where they should be, crisp in the right places, and overall contributing to the elegant, old-world charm of the piece. Andrew Gmoser’s always spot-on lighting highlights the beautifully designed set designed by Erin Kiernan; the set twinkles and sparkles like the crystal bottles of perfume and lotions on display. The sliding and rotating set pieces allowing for easy and seamless transitions from parfumerie to bedroom to cafe are quite inegnious and maneuvered perfectly by the cast, while the pastel tones of blue, lavender, pink and gold dominating the set are the perfect choices for this truly most charming of musicals, done to perfection at the Mac.

“She Loves Me” runs through Sunday, August 22 at the Mac-Haydn Theatre 1925 Route 203 Chatham, NY. Full COVID protection protocols are in place and required, including proof of vaccination, and full masking for audiences inside the theatre and on the grounds.