REVIEW: The Plein Air Plays at the Ancram Opera House 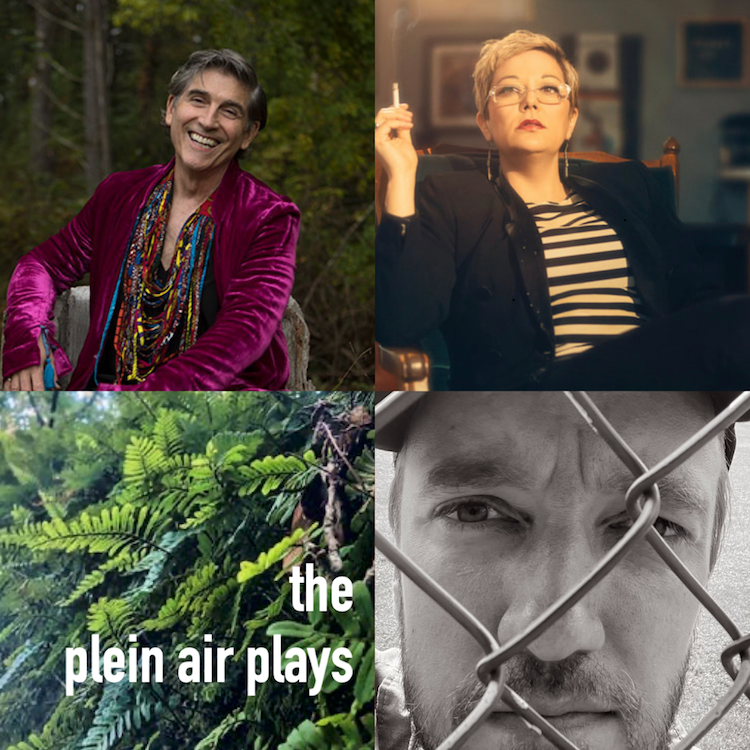 REVIEW: The Plein Air Plays at the Ancram Opera House

Imagine a team of two producers, co-directors of a tiny gem of an opera house located in the small town of Ancram, New York, tackling the logistical feat of staging three short, site- specific plays, performed simultaneously in residents’ yards and on a baseball field, whose spectators would drive from one to the other along the winding hills of the town.  Jeffrey Mousseau and Paul Ricciardi, with the cooperation of Ancram’s inhabitants, administrators and a slew of volunteers holding signs, directing traffic, setting up blankets, chairs, and benches (and providing water, bug spray, hand sanitizer and maps), successfully achieved theatrical magic with THE PLEIN AIR PLAYS, helped by a grant from the New York State Council on the Arts and some very welcome sunshine and cool breezes.

The ever-inventive combination of Mousseau and Ricciardi, following Covid protocols with an emphasis on outdoor productions this season, have involved their community in almost every aspect of their planning: Summer Play Lab with virtual community workshops and online performances; interviews with local residents throughout the year, Crystal Radio Sessions, where the stories of local writers are read, and Real People Real Stories, in which residents become storytellers who share their experiences.  No wonder the community flocks to see their productions—these people have been given a sense of ownership:  this is their theatre.

But when it comes to hiring actors for the performances of their plays, the Ancram Opera House features top professionals, most of whom are members of Actors’ Equity Association, as is the case in THE PLEIN AIR PLAYS.  The title refers to the practice, adopted by the nineteenth-century painters of the Hudson River School and the French Impressionists, of painting outdoors (“en plein air”), as opposed to within a studio setting.

The first play:  Baseball is Dead, written and performed by Frank Boyd, was presented at the baseball field at Blass Memorial Park.  Dressed as a baseball player, Boyd practices hitting and pitching while the audience takes its seats.  With the help of a ball cleverly tethered to a spot on the grass, Boyd is able to simulate an actual game without fear of audience injury.  He eventually offers his warped baseball bat to some of the spectators, asking:  “how’s it feel?” The actor is so passionate about his love of baseball that it’s contagious—even those who are not fans can’t help but be moved by his devotion to the game.  With his uncanny ability to imitate the windup of his favorite pitchers, Boyd elicits laughter that endears him to the audience.  He is filled with stories about his baseball heroes, beginning with Bobby Thompson’s pennant-winning home run for the Giants in 1951.  Thirty years later, in his old age, Boyd’s father described what baseball meant to him:  it’s “as good as life gets.” Noting that all civilization comes to an end, Boyd wonders about what will happen to baseball.  Maybe one player will revive it by sharing his memory with a group of others, as this performer is doing today, “taking refuge in the green fields of the mind.”

Next the audience is directed to a private home with a spacious property (Doodletown Farm), including two ponds, the larger of which is the setting for Georgina Escobar’s In a Million Years, directed by Jeffrey Mousseau.  This is the only one of the three presentations that features two actors–Andrea Morales and Aaron J. Stewart—a director, and doesn’t acknowledge the audience, seated on a hill facing the pond.  Entering from a small curtained-off area in a clump of trees, Elena (Morales) is on the phone, pouring out her misery about the breakup of her fifteen-year marriage.  Having come to this pond because it is reputed to heal heartbreaks, she suddenly encounters Dallas (Stewart), an old flame who had abandoned her years before.  She demands the return of a ring she had given him. What follows is a series of memories; a discussion about a mermaid in the pond who supposedly drowns heartbreakers; a tense dive into the pond by Dallas (will he be dragged under), and a surprise ending.  Mexican playwright Escobar’s themes of fantasy and mythology clearly inform this piece.  Because of the immediate presence of the spectators who share the space with the performers, the play did not work as successfully as the monologues before and after it.  One simply cannot ignore the role of the audience—the fourth wall has no place here.

Finally, as we wend our way down a long narrow, bumpy driveway to arrive at the gorgeous gardens of landscape architect Betzie Bendis, we meet playwright/performer Celeste Lecesne, formerly known as James Celeste Lecesne, an American LBGTQ rights activist, whose Academy award-winning short film, TREVOR, led to the Trevor Project, the only nationwide lifeline for LGBTQ youth.  In POOF!, a moving account of the harsh realities faced by these young people, the actor, dressed in full fairy regalia (an olive chiffon skirt over a purple leotard, jacket, and of course wings), describes how fairies had to live under the radar because it wasn’t safe for them to come out—they were despised as perverts and degenerates.  Blurring the distinction between mythical creatures and marginalized youths, Lecesne credits beloved characters like Tinkerbell with allowing fairies to finally be seen as the beings they want to become.  Never giving up hope that Mom and Dad would get over the shock of giving birth to a fairy, Lecesne demonstrates how fairies nevertheless manage to survive:  for every success in life, they use a red pencil—one distributed to each member of the audience–to draw a small star in a book.  This performer, holding the audience enthralled, breaks into song, persuading us to sing along and continue to draw those stars, demonstrating that the universe is not deaf to the desires of fairies.

What a wonderful way to spend a summer afternoon, capped by a glass of wine at the Ancram Opera House, in the company of such talented creators, performers, organizers, producers and the residents of this remarkable town!

THE PLEIN AIR PLAYS are now closed.  They ran from August 13-15 in various locations throughout Ancram, NY.  The performance lasted 110 minutes, including driving to each venue. https://www.ancramoperahouse.org