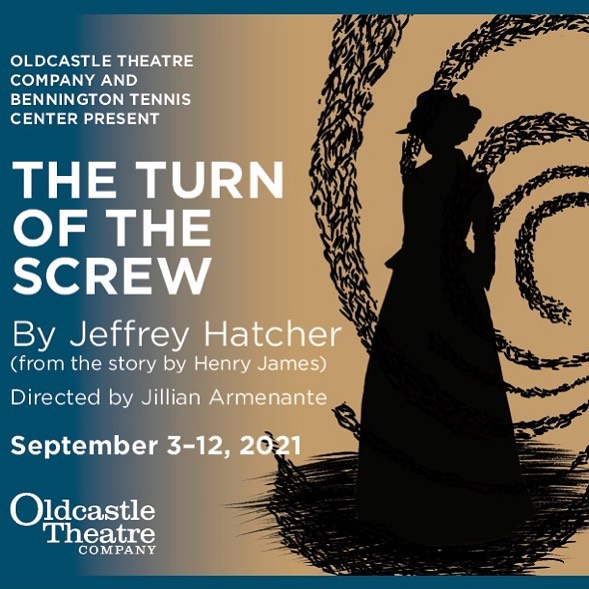 Opening September 3 at Bennington Performing Arts Center is Oldcastle Theatre Company’s final production of the season, THE TURN OF THE SCREW by Jeffrey Hatcher, from a story by Henry James. “One of the things we wanted to do this season is highlight the things that the theatre can do better than any other medium,” says Artistic Director, Nathan Stith. “In THE TURN OF THE SCREW, Jeffrey Hatcher relies on the imagination of the audience to help tell the story. It’s almost as if the audience’s imagination becomes another character in the play.”

Based on the story by Henry James, THE TURN OF THE SCREW is the story of a Victorian-era governess who is hired to care for two orphaned children. After learning of the deaths of her predecessor and the former groundskeeper, the governess is haunted by the images of their ghosts. However, like James’ story, Jeffrey Hatcher’s adaptation leaves it up to the audience to decide if the ghosts are real or merely figments of her imagination. Not only does the play examine the power of the human imagination, but the style and structure of the play ask the audience to really tap into their own imaginations in interesting and creative ways. One actor in this two-hander plays the governess, and the other actor plays all of the other characters.

We’re excited to welcome Oldcastle newcomer, Jillian Armenante, who will be directing THE TURN OF THE SCREW. Jillian is best known as a television and film actor, including roles on BETTER CALL SAUL, FRESH OFF THE BOAT, and series regular, Donna Kozlowski, on JUDGING AMY. She is returning to her theatrical roots with this production. She has acted on the stage at The Seattle Rep Theatre, The Mark Taper Forum, and The Atlantic Theatre where she received a drama desk nomination for her work in THE CIDER HOUSE RULES. She directed the West Coast Premiere of WE ARE PROUD TO PRESENT… by Jackie Drury, which was an LA Times Critics Pick, Ovation Award pick and winner of Best Production at the LA Weekly Awards. She produced and directed the world premiere of LOVE LOVES A PORNOGRAPHER by Jeff Goode and won a Drama Critics Award and several Garland Awards including “Best Director”.

Appearing as the governess we welcome another Oldcastle newcomer, New York-based actor Rebecca Mozo. Mozo’s regional credits include roles at Center Theater Group, Pasadena Playhouse, and over ten productions at the Tony-award winning, South Coast Repertory, among others. She won an Ovation Award for her role as W in Mike Bartlett’s COCK at Rogue Machine in Los Angeles. Television credits include “Grey’s Anatomy,” “Modern Family” and “Kittens in a Cage,” also directed by Jillian Armenante.

Playing opposite Mozo is Oliver Wadsworth, an award-winning actor who was most recently seen at Oldcastle Theatre Company in THE LAST DAYS OF MICKY AND JANE.  Wadsworth has appeared Off-Broadway in WELL at the Pubic Theatre and BREAD AND ROSES at New York Theatre Workshop, as well as in the first national tour of CHITTY CHITTY BANG BANG. Other credits include roles at Arizona Theatre Company, Old Globe, Long Wharf Theatre, and Syracuse Stage, among others.

THE TURN OF THE SCREW is directed by Jillian Armenante with costume and scenic design by Ken Mooney, lighting design by David V. Groupé, and sound design by Cory Wheat. The production stage manager is Kristine Schlachter.

The production runs September 3-12 at Bennington Performing Arts Center—The Home of Oldcastle Theatre Company, 331 Main Street in Bennington, VT. For the safety of everyone, we are once again requiring that audience members wear masks inside the theater.Performances are Wednesday–Saturday at 7:30 pm; and Saturday and Sunday at 2 pm. Wednesday, September 8, is Pay What You Will Night, all other performances are $25 per ticket. Tickets can be purchased online at www.oldcastletheatre.org/tickets, by phone at 802-447-0564, or in person 90 minutes prior to each performance.