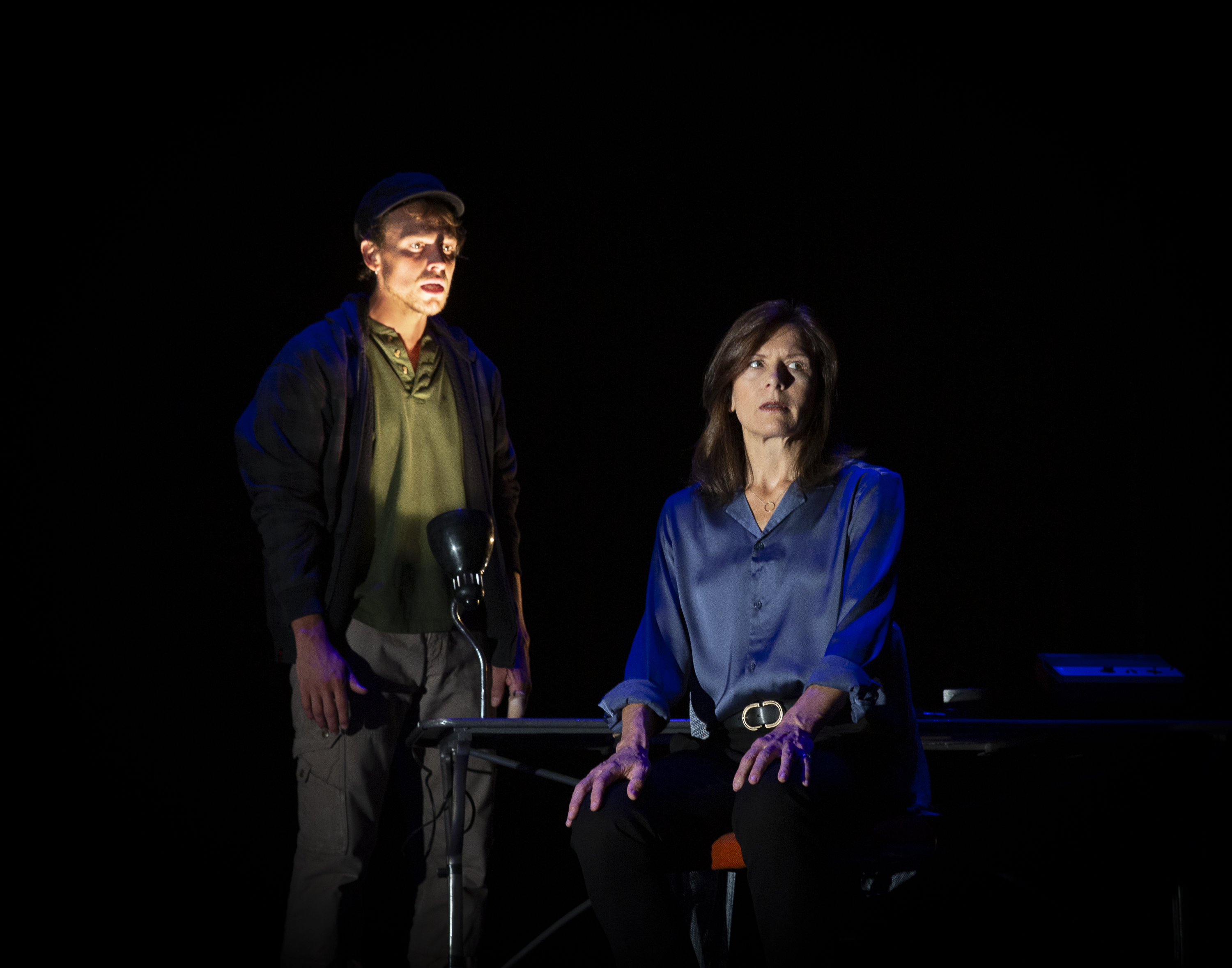 A chilling article in The New Yorker entitled “The Confession” by Alec Wilkinson (see PDF of article at bottom of page) is the basis of a riveting play, Sister Sorry, also by Mr. Wilkinson having its world premiere at Barrington Stage Company’s Boyd-Quinson stage in Pittsfield, Massachusetts.

The magazine story details how a man who called himself Mr. Apology created a telephone number where people could atone for the past hurtful actions they had done to others thereby relieving them of their guilt without having to face their victims.  He posted flyers with the phone number throughout Manhattan, He also provided a line where others could respond to the initial confessions.

The play version makes the founder of “The Line” a woman who uses the name Sister Sorry (Jennifer Van Dyck) describes herself in a long opening monologue as a shoplifter, an unsuccessful PH.D. candidate in mathematics and an artist.  She admits to posting the announcements so that she can not only allow respondents to state their piece but, more importantly to her, to use the statements in a sound piece at an art gallery.  She fervently waits for the call “…that will change my life.”  When a message comes in from a man who identifies himself as Jack Flash (Christopher Sears) confessing to matricide, Sister Sorry is captivated

Unlike most other callers who leave a single message, Jack calls The Line incessantly and he and Sister Sorry  become obsessive in their need for the other.  The confidences soon grow into conflicts and eventually the perceptions of themselves send each through profound changes.

What makes this play work is everything. Van Dyck and Sears create complex characters, neither one likable but both intriguing.  Sister Sorry is a woman who, after her early failures, has found a way to make herself feel important.  She says, “I think of these confessors as performing for me.”  Though her projection and articulation sometimes falter, Van Dyck holds the stage with strength and purpose.

Sears is a dynamo.  Most of Jack’s delivery is self-indulgent, angry or threatening.  Rather than merely vocalizing these attitudes there is a depth to them that is menacing.  He roams the stage like a lion challenging Sister Sorry while ranting about his life.  As he argues, his paranoia and her arrogance emerge through subtly nuanced performances.  It is difficult to take your eyes off both actors.

As intense as the acting may be, the direction of Joe Calarco builds the tension so that the entire audience is rapt.  He keeps the actors moving until he sculpts them into compelling stage pictures that suggest the developing relationship of the antagonists.  Though they often express anger and frustration he doesn’t allow them to move into melodrama.

The set, based on a design by Mikiko Suzuki MacAdams, is open to the rear wall and the wings of the stage.  Much of the action takes place on a platform with several girders extending upward beyond sight. The only furniture is a table and a desk each with a chair, a telephone on one, an answering machine on the other.  Though it suggests a New York loft it feels cramped lending a dark tone to the space.

This is enhanced by David Lander’s lighting design whose instruments are open to the eye contributing to both the feeling of openness and claustrophobia.  He dramatically uses shadows either on the whole set or the actors’ faces contributing to the sense of danger that surrounds the set.

Debra Kim Sivigny’s costumes illustrate the characters’ personalities.  David Budries’ sound is mostly limited to the recorded voices on the answering machine giving credibility to the weirdness The Line created even in real life.

Sister Story is an impressive theatrical experience.  Do not miss it.