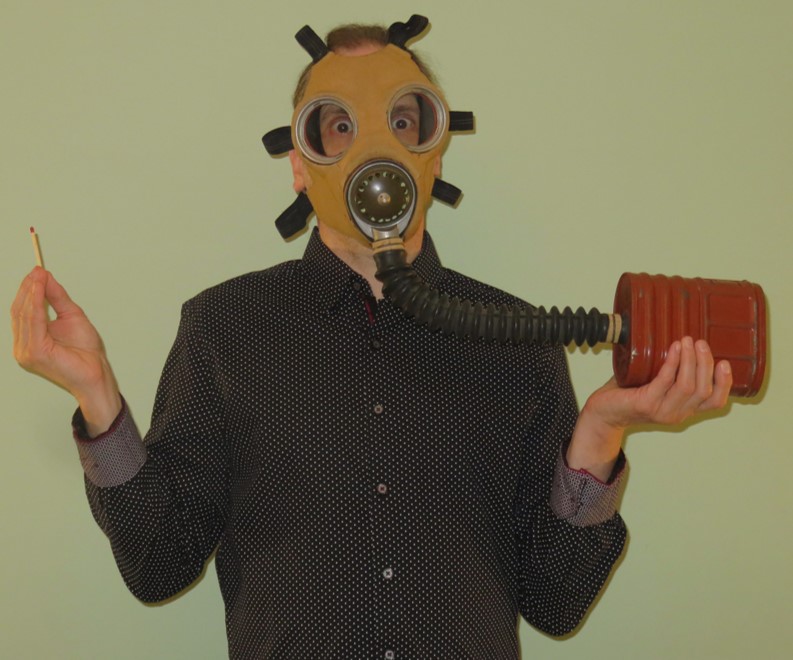 Saratoga Springs, NY – Millions of dollars, tons of poisons, thousands of schoolchildren, scores of angry townsfolk, plenty of lawyers, more than enough politicians – all of them get mixed up in a raucous episode of modern local history as humorist Dirck Toll presents the world premiere of his new show What You Burn Is What You Breathe at Saratoga’s Caffè Lena on Sunday October 10 at 2:00 PM. Ticket sales support the local environmental organization Sustainable Saratoga.

What You Burn Is What You Breathe features Toll single-handedly presenting the twisted true story of a small New York community’s confrontation with an industrial operation posing dire consequences, a story that takes increasingly bizarre turns as the conflict escalates. “It will probably strain believability,” Toll says, “but all the events and all the characters in this show are real. Even me.”

In keeping with the theme of the show, as well as with Toll’s hardcore commitment to environmentally-conscious staging, What You Burn Is What You Breathe will be performed under natural lighting with natural amplification, and ticket sales will naturally support the local organization Sustainable Saratoga, who also welcome non-Dirck-Toll-related donations in their mission to advance sustainable practices and protect natural resources for the benefit of current and future generations.

The October 10th show marks Toll’s 10th performance at Caffè Lena, where his previous appearances have included sold-out stagings of his shows such as Before and After Intermission, Irregular Opposition, Relax – I Brought Enough Ego For Everybody, and Levelling Charges. Toll’s stage career has literally spanned coast to coast, with shows from San Francisco to Newport, Rhode Island. Locally, the Albany Times Union says “Calling Dirck Toll an underground Mark Twain might be a stretch, but not by much,” and his earlier performances have been picks-of-the-week in many area newspapers, some of which are thankfully still in business.

So if you’re ready to be jolted by truth and entertained by shocks, then join Dirck Toll on October 10 as he takes you on an energizing adventure directly into an irrational reality and – if you’re lucky – out the other side!