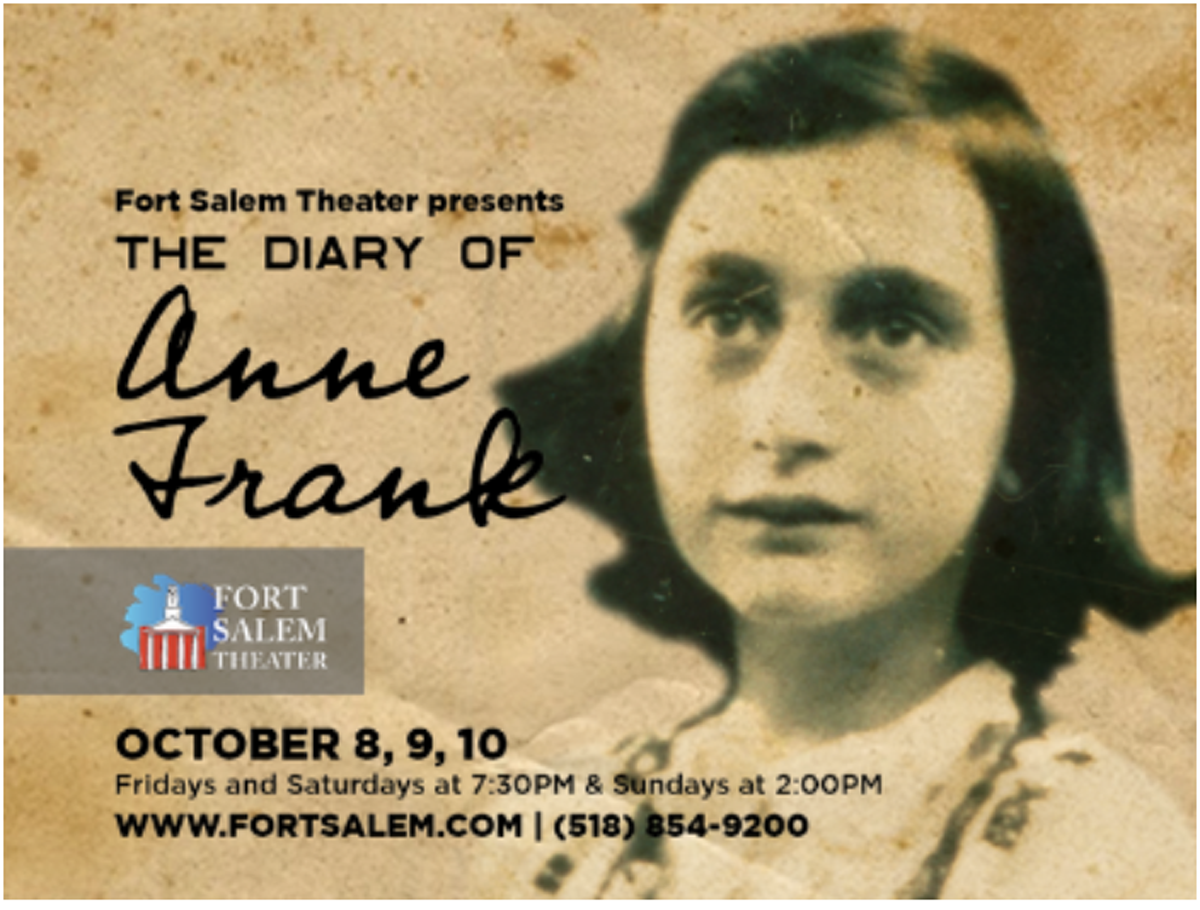 Auditions for The Diary of Anne Frank will be held this Wednesday, September 8th from 7PM-9PM by appointment at Fort Salem Theater (11 E. Broadway, Salem NY 12865). Each actor will receive a minimum of two complimentary tickets. Travel and stipends are not available at this time. All roles are open to people of any age, ethnicity, or gender identity. Actors must be fully vaccinated before the start of rehearsals.

Be prepared to cold read from the script.

In this transcendently powerful new adaptation by Wendy Kesselman, Anne Frank emerges from history a living, lyrical, intensely gifted young girl, who confronts her rapidly changing life and the increasing horror of her time with astonishing honesty, wit, and determination. An impassioned drama about the lives of eight people hiding from the Nazis in a concealed storage attic, THE DIARY OF ANNE FRANK captures the claustrophobic realities of their daily existence—their fear, their hope, their laughter, their grief. Each day of these two dark years, Anne’s voice shines through: “When I write I shake off all my cares. But I want to achieve more than that. I want to be useful and bring enjoyment to all people, even those I’ve never met. I want to go on living even after my death!” This is a new adaptation for a new generation.

A Play by Frances Goodrich and Albert Hackett
Based upon “Anne Frank: The Diary of a Young Girl”
Newly Adapted by Wendy Kesselman
Directed by David Braucher

Rehearsals will begin the following week, typically Mon-Thrus 7PM-9PM and occasional Saturday mornings or Sunday nights only as necessary.

ANNE FRANK: (teenage) Anne is extraordinary in her hope, passion, and belief in the good in the world. At the start of the show she is innocent, precocious and does not hesitate to speak her mid. As she matures thru her time in hiding she becomes introspective, compassionate and ultimately, eager and hopeful for a more accepting future for everyone. She does not feel close to her mother, but idolizes her father. She is compelled to write, documenting every moment and feeling experienced in the annex.

OTTO FRANK: (adult) Anne’s father, very much the patriarch of the Annex. He leads with love and strength in all he does. Unlike young Anne, Otto is even tempered and strives for peace in every situation. At 53 years old, he has the resilience of a younger man but the experience to recognize the reality of the world around him.

EDITH FRANK: (adult Anne’s mother. She is reserved and soft-spoken. Constantly worried about her family and their fate. Closer with her older daughter, Margot, she longs for a deeper connection with Anne. Although quiet, she has a bit of Anne’s fortitude and when pushed, will make her mind known.

MARGOT FRANK: (teenage) Anne’s older sister. Quiet like her mother. More mature and intellectual than her sister. Margot feels alone and unsure of her place in the annex. She is reserved and respectful of others. Very close with her mother and although they are opposites, she loves and admires her little sister. She longs for a deeper connections to others, but does not know how to achieve them.

MR. VAN DAAN: (adult) The head of the Van Daans. Struggling to find his place as second in command. He is intelligent and pragmatic if a bit harsh. He wishes to make his wife happy but on his terms. Wants to teach his son to be more out going and to toughen him up during their time in the annex. Is grateful to Otto for welcoming his family into the Annex without question.

MRS. VAN DAAN (adult) Not ready to give up her lifestyle. She tries to view the annex as simply a new locale, rather than a necessity for survival. She can be a flirt and Anne even goes so far as to call her frivolous. She clings to her fur coast like one clings to their very identity. She hides her fear of the unknown by worrying about trite things such as Anne and Peter’s growing friendship of which she is jealous.

PETER VAN DAAN (adult) The Van Daans’ only son. At the beginning he is annoyed with Anne, but later confesses to admiring her spirit. They become good friends during their time in hiding. He is trying to find his place, not only in the annex, but in himself. Not sure of who he will become of if he will be given the chance to find out. He has a good heart and is protective of those he loves.

MIEP GIES (adult) A kind, Dutch secretary from the office of Otto Frank. She helps hide the Franks, Van Daans, and Mr. Dussel. Miep is their connection to the outside world as she keeps them informed and stocked with food, books, and the occasional treat. She is kind and worried but determined to protect them. It is Miep who would find Anne’s diary and save it until after the war, delivering it to Otto upon his return.

MR. KRALER (adult) Otto Frank’s business partner. He helps to hide the members of the annex. Like Miep, he never questions his obligations to the Franks and to doing what is right/ A dignified man, at a loss for the world around him.

MR. DUSSEL (adult) A fussy dentist. He is the only one in the annex without family, having left behind his live in girlfriend who is Christian. More than anyone in the annex, he puts himself first at every turn. He has little patience for his roommate, Anne, and is skeptical of their future.