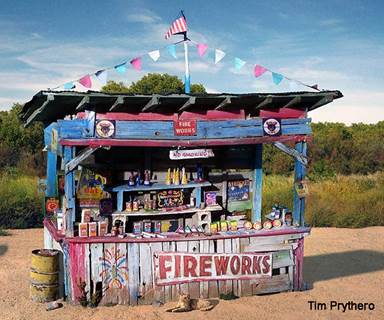 The limitless frontier explored by Meriwether Lewis has dwindled for one of his descendants to a tiny sliver of Idaho land on which she runs a laughably unprofitable roadside fireworks stand. MacArthur ‘Genius Grant’ recipient Samuel D. Hunter explores the emotional wilderness of a family struggling to stay afloat and keep their American dreams alive in “Lewiston”, an affectionate, poignant, and profoundly empathic new play, coming to Catskill’s Bridge Street Theatre for eight performances only October 7 – 17, 2021.

Alice is on the verge of selling a developer the last 20 acres of land she owns (and which has been in her family since the 1850s) in exchange for a condo with a pool. She’s broke, running a laughably unprofitable fireworks stand with her 53-year-old gay (but not out) roommate, Connor, who works part-time at Walgreens to help make ends meet, and he and Alice subsist mostly on a diet of Michelob Light and reheated Tater Tots. Then Alice’s estranged granddaughter Marnie turns up – young, earnest, and
self-righteous – having run from the urban farm in Seattle she dropped out of college to found, intending to buy the last of the family land from her grandmother. Both women are haunted by Marnie’s mother’s death – she killed herself when her daughter was 8, after hiking the Lewis and Clark trail – and Marnie can’t bring herself to tell her grandmother the real reason she’s left Seattle, looking for a home and a tiny patch of land where something new could grow.

This regional premiere will be directed by Sara Lampert Hoover, with sets by John Sowle, lighting by Nicholas Hawrylko, and costumes by Michelle Rogers. Featured in the cast are actors Leigh Strimbeck, Daniel Hall Kuhn, and Montana Lampert Hoover. Production Stage Manager is Liz Powers. Bridge Street Theatre’s entire Fall 2021 “American Roots Re-Awakened” Season is sponsored by Nina Matis and Alan Gosule, and production of “Lewiston” has been funded in part by a Restart NY Grant from the New York State Council on the Arts.

“Lewiston” will be performed Thursdays – Sundays, October 7 – 17, 2021, on Bridge Street Theatre’s “Priscilla” Mainstage, located at 44 West Bridge Street in the Village of Catskill. The show is recommended for audiences ages 12 and over. Thursday, Friday and Saturday performances are at 7:30pm, with Sunday matinees at 2:00pm. Admission at the door is $25, Students and Children ages 18 and under are only $10. Discounted advance tickets (highly recommended) are available for $22/$10 (+ a small service fee) at lewiston21.brownpapertickets.com. In addition, the Thursday October 7 preview and Sunday October 10 matinee will each be bargain “Pay-What-You-Will” performances.

For the safety of both audiences and artists, Bridge Street Theatre follows union and state guidelines for indoor entertainment venues. All attendees will need to provide proof of vaccination or a recent negative test for COVID at the door prior to entry. In addition, masks will need to be worn at all times while in the theatre building. For more detailed information on the theatre’s safety precautions and attendance requirements, visit bridgest.org/covid-safety-rules-at-bst/.

Daniel Hall Kuhn (Connor) More than a few years ago I had the privilege of working with John and Steven in Kaliyuga Arts production of All That Fall at Cherry Lane Theatre in NYC. Since then, I have had the good fortune to perform in multiple national tours, summerstock, film and voice over projects. During the pandemic I have been working on a one man show featuring the writings of Edgar Allan Poe, including an educational, interactive version available for classroom streaming. To learn more about me or my “Poe Show,” please visit my website: www.DanielHallKuhn.com.

Montana Lampert Hoover (Marnie) is very excited to be back at The Bridge Street Theatre! Montana is a New York based actor, singer, and puppeteer. Recent acting credits include In the Parlour (American Slavery Project), The F%@#ing Wright Brothers (NY Fringe), Hand To God (Kitchen Theatre Company), Double Falsehood (Letter of Marque), Old Names for Wildflowers (The Tank), Revelations (NYWinterFest), Hamlet (SheNYC), Out There! (Bluelaces Theater Company), Battle of Central Park (The Tank). She is very proud to be lending her hands and voice (while hiding behind a chair) to create the voice and movement of Teddy on Queer Kid Stuff! (Youtube). Montana is a proud Sarah Lawrence College graduate. She would like to thank her Mama for, well, everything. @mlamperthoover www.montanalamperthoover.com

For further information on “Lewiston and other upcoming events at Bridge Street Theatre, check the theatre’s website at bridgest.org. Live theatre is back! Don’t miss this moving and deeply American play in its upstate premiere.

Tickets:
Advance tickets available at https://lewiston21.brownpapertickets.com
General Admission $22, $10 for Students and Children ages 18 and under
Tickets can also be purchased at the door prior to each performance (on a space available basis) for $25, $10 for Students ages 18 & under.