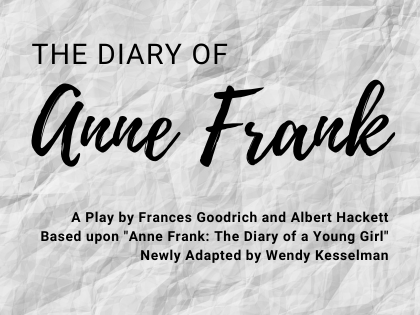 SALEM, New York, September 15, 2021 – Fort Salem Theater is thrilled to announce the cast and creative team for The Diary of Anne Frank, which performs October 8, 9, 10 on the theater’s mainstage. Tickets are now on sale at www.FortSalem.com.

In this transcendently powerful new adaptation of The Diary of Anne Frank by Wendy Kesselman, Anne Frank emerges from history a living, lyrical, intensely gifted young girl, who confronts her rapidly changing life and the increasing horror of her time with astonishing honesty, wit, and determination. An impassioned drama about the lives of eight people hiding from the Nazis in a concealed storage attic, The Diary of Anne Frank captures the claustrophobic realities of their daily existence—their fear, their hope, their laughter, their grief. Each day of these two dark years, Anne’s voice shines through: “When I write I shake off all my cares. But I want to achieve more than that. I want to be useful and bring enjoyment to all people, even those I’ve never met. I want to go on living even after my death!” This is a new adaptation for a new generation.

Taking on the title character is 15-year-old Greenwich High School student Dorothy Slim Van Pelt (Anne Frank), who has previously performed in school productions and participated in workshops though Hubbard Hall. She is joined by Rhylie Lynch (Margot Frank), a 15-year-old Greenwich High School student whose past roles include Dorothy in The Wizard of Oz, Jade in We Are Monsters, and numerous productions with Schuylerville Children’s Community Theatre, Hubbard Hall, Saratoga Children’s Theatre, and the Schuylerville Middle School Drama Club. Salem Central School senior Quinn Donaldson plays the role of Peter Van Daan. Quinn recently performed as Tom in Fort Salem Theater’s Schoolhouse Rock Live! Jr. and as Seymour in his school’s production of Little Shop of Horrors.

The Diary of Anne Frank is directed by David Braucher, whose local directing credits include Curtain Call Theater, Confetti Stage, Hubbard Hall, Greenwich Youth Center, Soul Rebel Performance Troupe (now Black Theatre Troupe of Upstate New York), and the premiere of Our Time by Ken Levine (head writer “MASH”, “Cheers”) at Saratoga Arts Center. In addition, he has done training for Skidmore College’s “Awkward Kids Talking” improv troupe, and has performed at Fort Salem Theater, where he appeared as Dracula in Jay Kerr’s Dracula’s Grandmother and as Linus in You’re an Old Man, Charlie Brown. He is joined by scenic designers Charles Krawczyk and Darrell Holovach, with Anna Threet as stage manager.