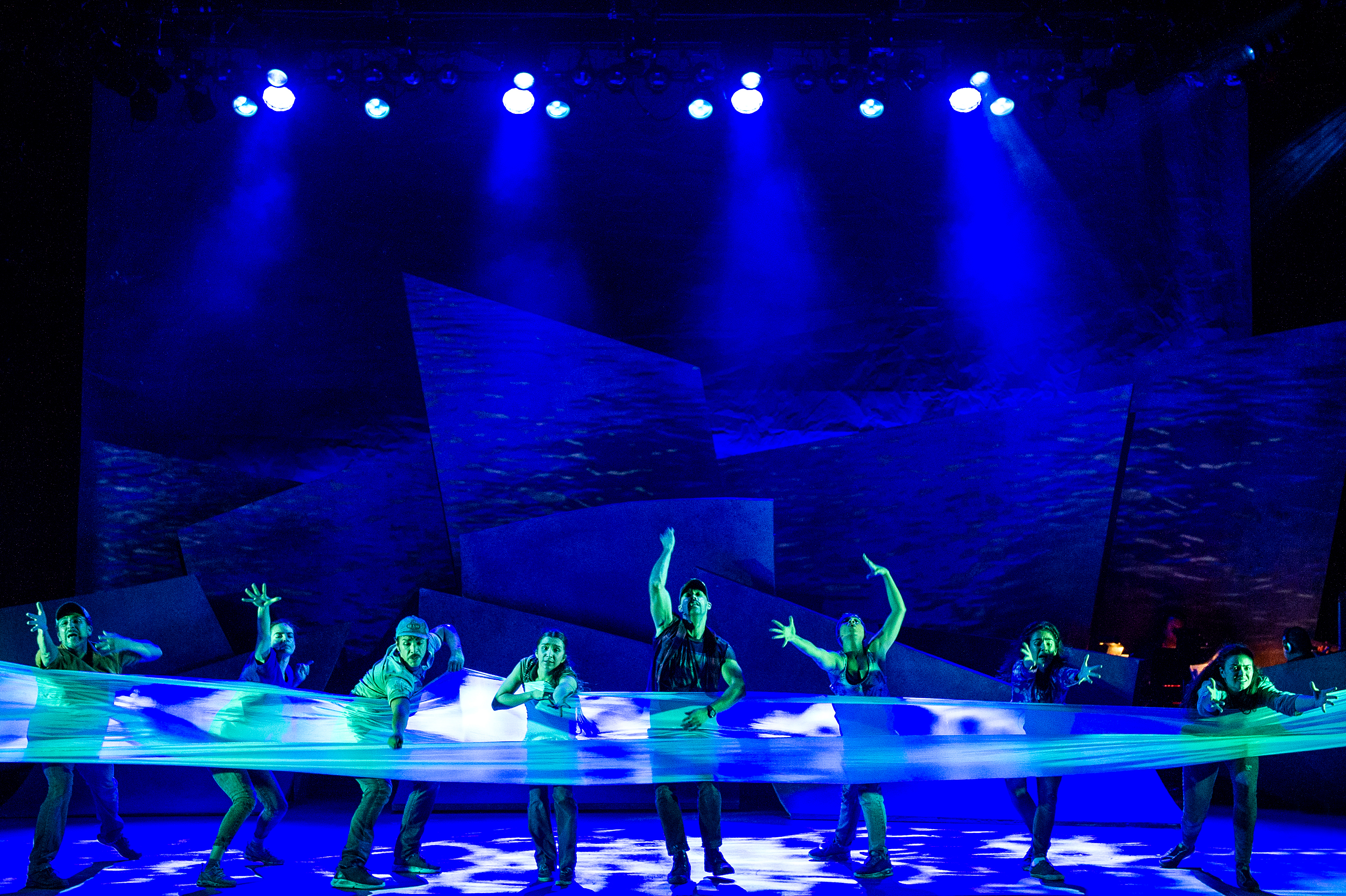 Barrington Stage Company concludes its summer season with a creatively brilliant but flawed spectacle:  A Crossing.  In response to the immigration crises on our southern border, Director Joshua Bergasse, who has been developing this show for six years, seeks to shine a light on the humanity of those who risk perilous journeys to find safety and refuge in the U.S.

In an interview with The Berkshire Eagle, Bergasse explains:  “Seeing these characters onstage gives us a chance to empathize.  We’re not trying to be political.  We’re just saying this is a human issue we can’t ignore.”  Bergasse, a Barrington Stage Associate Artist and award-winning Broadway and off-Broadway Director/Choreographer, presents this issue in the form of a Dance Musical with no dialogue.  In his search for authentic movement and song, Bergasse collaborated with Alberto Lopez, a Choreographer, Costume Designer/Maker, Teacher and the Artistic Director of the New York City based Calpulli Mexican Dance Company, which offers classes and workshops in Mexican and Mexican-American dance and music, celebrating their cultural heritage through worldwide tours. The musical’s story was developed by Lopez and another BSC artist:  playwright Mark St. Germain.  Original music was written by Zoe Sarnak, and George Saenz, musical director and educator for the Calpulli Mexican Dance Company, provided additional original music as well as traditional Mexican folk song arrangements.

In nineteen scenes, we follow ten migrants and two storytellers (described as ancestors of the travelers): Luna (Monica Tulia Ramirez) and Sol (Andres Quintero) on their journey from Mexico across the border into the U.S., guided by a ruthless Coyote (Omar Nieves).  The cast features strong singers, led by the powerful voice and presence of Ashley Perez Flanagan playing Giselle, a young woman accompanied by her grandfather (Carlos L. Encinias), who has persuaded her to leave Mexico (against her will), where her activist parents were killed.  The members of the ensemble are also dancers, performing both contemporary and traditional choreography, shepherded by the supple, graceful, balletic movement of Omar Nieves, which can feel antithetical to his character.

The set, by the great Beowulf Boritt, whose striking conception of a railroad station for Barrington’s Chester Bailey is more than matched by his breathtaking scenic design for A Crossing.  A modern, geometric version of the Statue of Liberty with her torch, tablet, and pedestal bearing Lazarus’ famous lines, appears in the first scene, taken apart by cast members, who sit on the various pieces.  Movable rock formations of different sizes and shapes line the stage, becoming tall mountains with platforms behind them that can be reversed, turning into ramps on which the migrants rest.  Most intriguing are rotating, circular black and white models of the round Aztec sun stone that served as a calendar, each of whose days had its own name, number and deity.  Costume Designer Alejo Vietti includes this Aztec design, which was often tattooed on warriors, in the costumes of the storytellers. The inventor of calendars and books, patron of priests, and god of the wind, Quetzalcoatl, the Aztec version of the Feathered Serpent deity, makes a glorious appearance in full regalia designed by Vietti, in the person of Caleb Marshall-Villarreal, dancing to the accompaniment of drums and the ringing of bells on his costume.

Lighting Designer Jason Lyons’ dazzling use of illumination colors the rocks and the cyclorama (aided by Jeff Sugg’s projections), surrounding the cast with fiery orange that seems to penetrate the set with desert heat.  Behind a scrim, Lyons and Sugg produce a fierce rainstorm accompanied by thunder and lightning, and Lyons, lighting a long sheet manipulated by two cast members (reminiscent of Uncle Tom’s Cabin), suggests a tempestuous river, defying the travelers to cross it.

How then, is this spectacular production flawed?  Because of the lack of dialogue, the audience must follow the story by means of the words to the songs or the movements of the dancers.  The latter can communicate what happens at particular moments, but not the back stories of the migrants—their reasons for leaving their homeland.  To understand those, we depend on the lyrics and that is the problem:  it was very difficult to understand what was being sung.  It was unclear whether this was due to the volume of the onstage music (the musicians were not visible), or more likely, the fact that the lyrics, which had to serve a narrative function, were prosaic, with very little imagery to make them stand out.  The writing of lyrics is an art form—those that are most meaningful rise to the level of poetry, which is why they remain with us long after a production is over.  In every story of hardship, of tremendous obstacles that have to be overcome, whether onstage, on film or in literature, we are introduced to a few particular characters that symbolize all the others, and it is their fate that brings us into the story.  But in the case of A Crossing, though the songs were in the script, we were not able to distinguish what happened to the characters we should care about, and as a result we did not feel the empathy sought by Bergasse.

As with all courageous new works, this one will no doubt be revised as it makes its journey to other performance venues.  One hopes that this important story, which has so much going for it, will find its center.

A CROSSING runs from September 23—October 16, Wednesdays through Saturdays at 7:30 pm; Saturdays and Sundays at 3:00 pm at Barrington Stage Company’s Boyd-Quinson Stage, 30 Union Street, Pittsfield, MA.  For tickets call 413-236-8888 or online at Barringtonstageco.org

All patrons are required to present proof of vaccination or a recent negative COVID test, ID, and remain masked throughout the performance.